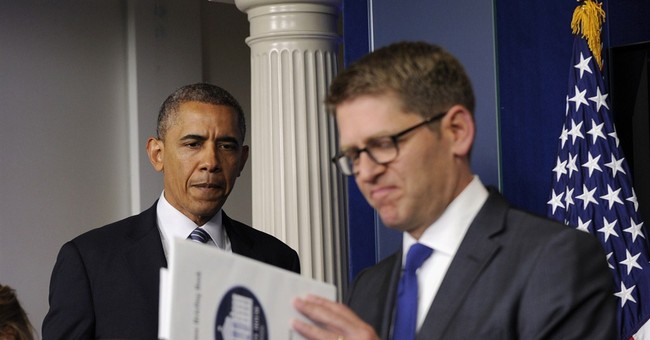 Trending
By now, everyone knows that there's a revolving door between Democratic politics and the "objective" news media. But does it have to spin so fast? On Sept. 10, CNN announced it hired former White House press secretary Jay Carney as a commentator, citing his "invaluable voice for the network" after his five years inside the Obama administration.

By that afternoon, and in heavy rotation in the evening around an Obama speech, Carney was battling for the White House position. Having a direct conflict of interest isn't disqualifying if you're labeled a "commentator." The issue: Can Carney truly offer "invaluable" commentary when the media themselves know that he used his White House podium to spout falsehoods to the press?

1. During a May 23, 2012 press gaggle, Carney scolded reporters for repeating "the BS" that Obama was a big spender. He bizarrely claimed the rate of spending under Obama is lower than

"all of his predecessors since Dwight Eisenhower, including all of his Republican predecessors," and contrary to everything we know, Obama "has demonstrated significant fiscal restraint and acted with great fiscal responsibility." Forget the trillion-dollar deficits.

The Washington Post's designated "fact checker" Glenn Kessler gave Carney "3 Pinocchios" for that: "Under Obama, it [spending] has hit highs not seen since the end of World War II -- completely the opposite of the point asserted by Carney."

2. In a Nov. 4, 2013 briefing, ABC's Jon Karl caught Carney rewriting history as he tried to explain away President Obama's statement that someone could sign up for Obamacare on the website in mere minutes. Carney claimed, "We have never said that you ... wouldn't still have to go through Healthcare.gov."

Karl insisted: "Actually, that's not true, Jay. Look at your own words on Oct. 21, the same day. You said, you can enroll over the phone. You can enroll in person. On Oct. 23, you said there are four ways to enroll in the exchanges. You didn't say they all had to go through Healthcare.gov."

3. The next day, Carney tried to defend Obama's "you can keep your health care" pledge by blaming the insurance companies: "The provision in the law was the manifestation of the assurance that if you have a plan you want to keep, you can keep it. Insurance companies that chose to strip away benefits from existing plans in the interim, that canceled existing plans in the interim, they took away that grandfathering opportunity. And that's a reality."

Again, the Post fact-checker gave Carney "three Pinocchios," saying: "The administration's effort to pin the blame on insurance companies is a classic case of misdirection."

4. During an April 30, 2014 briefing, Carney tried to justify the failure to turn over documents related to Susan Rice's post-Benghazi media appearances when they were subpoenaed by the House: "The email and the talking points were not about Benghazi, they were about the general situation in the Muslim world. ... It was explicitly not about Benghazi."

CNN's Jake Tapper reacted on the Hugh Hewitt radio show: "You know, calling somebody a liar is not normally the kind of language I use. But I think that the comments that are being made are dissembling, obfuscating, and often, you know, insulting."

These aren't misstatements. They are very big, very deliberate falsehoods. Somehow that qualifies him for a job at CNN.