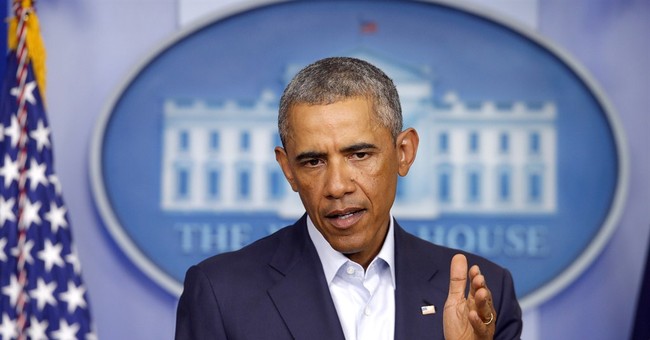 The amount of mockery presidents endure usually corresponds with their polling. It applies to Republicans (Nixon, Bush, Bush), but sometimes also to Democrats (Carter).

In 2012, the Center for Media and Public Affairs found network late-night shows told twice as many jokes about Mitt Romney as they told about President Obama. Was it because Obama was more popular than Romney? Or did it make Obama more popular than his opponent?

Obama isn't running for office again, so there's no need for satirists to go easy on him at the risk of endangering his electability. The last NBC poll put Obama's approval rating at 40 percent approval, 54 percent disapproval. His numbers are Carter-esque. Increasingly, he is seen as a national embarrassment, and yet the utter lack of zinging satire for Barack Obama remains.

The Hollywood Reporter recently posted interview excerpts from an updated version of "Live From New York," a book chronicling the history of NBC's "Saturday Night Live." In these snippets, one can see that protecting the left is paramount in that industry.

In Obama's first term, "SNL" was under attack from the left for using a white comedian (Fred Armisen) to mock Obama (very gently). When the show began a new season in the fall of 2012, they turned to a black comedian, Jay Pharoah. But he's also afraid to zing Obama.

In an interview, Pharoah described an event at movie mogul Harvey Weinstein's house where he did an Obama impression in front of the president. "I was [Obama] at this event, and [Obama] stood right there watching me do it. He was laughing; it was so petrifying. As long as there's no beef between me and the president, that's good. When that happens, you're Kanye West."

Back in 2009, Obama famously called West a "jackass" in an open-mic remark.

The last memorable Pharoah skit came back on Dec. 14, 2013. His fake Obama tried to explain himself out of the controversies surrounding the funeral of former South African president Nelson Mandela, including the spectacle of a completely unqualified man attempting sign language interpretation next to the president. Most the skit was dedicated to a phony interpreter lamely making signs behind Obama's back.

Jim Downey, a longtime writer and producer of "SNL," explained to the authors that there was no appetite for attacking Obama.

"I'm sure there are a lot of people in comedy who completely share every f---ing detail, jot and tittle of the Obama administration agenda, and all I can say is: To the extent that you're sincere and that's really the way you feel, then you're a very lucky person," he explained. "Because, guess what? You're going to have a very easy career in comedy because audiences will always applaud. They may not laugh, but they'll always give you [a] huge ovation. That's Bill Maher, you know?"

For having this distaste for moving submissively with the liberal crowd, Downey was mocked by former cast member Horatio Sanz as "basically the Karl Rove of 'SNL.' He's always writing the right-wing sketches, and honestly I think a lot of times they're out of tune with the audience."

Can anyone remember a deluge of "right-wing sketches" on television in the last six years, on any broadcast channel? And at this low ebb of Obama's popularity, is mocking the president really "out of tune" with the country?