The Media's Sharpton Agenda in Ferguson 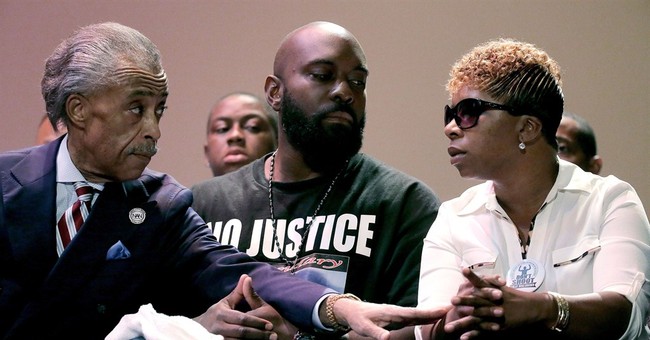 The late media critic Edwin Diamond once notably quipped that to the American news media, "10,000 deaths in Nepal equals 100 deaths in Wales equals 10 deaths in West Virginia equals one death next door."

When it comes to race relations, a similar rule applies. 400,000 civilians have been murdered in Darfur, but one death of a black man in Missouri, allegedly due to white police brutality, is infinitely more newsworthy. The national media are currently obsessed with Michael Brown's killing by a policeman in Ferguson, Missouri, just as they obsessed over Trayvon Martin's killing in Sanford, Florida.

Our media aren't in the news business. They're in the narrative business, and one of their favorite narratives is that America is deeply racist (something that electing a black president twice in no way disproves). In this liberal view, Ferguson is not atypical, but the rule. It's what white cops do to innocent black folks.

Leftist author and former Clinton aide Eric Liu exemplified the media's reckless racial kangaroo court on the PBS NewsHour: "In every town in this country, there are young people who, because of the color of their skin, are receiving brutal mistreatment by law enforcement. And there are communities all across this country right now where people across lines of race and class simply do not see each other, do not -- they may pass each other, but they don't really see one another."

PBS set the table by suggesting "every town in this country" is Ferguson. If you think the media are interested in peacemaking, you're incredibly misguided. The media are like Al Sharpton. Journalists arrive on the scene to exploit racial tension and build it, not to relieve it. Their presence in Ferguson is intended to pour salt in the wound, and push for more protest and disorder, not less.

It's why Rush Limbaugh famously dubbed them the "drive-by media."

The endless hours of national media obsession in Ferguson far outweigh the attention to much deadlier black-on-black violence, like we've recently seen in Chicago. Take ABC, for example. Over a three-day span in April, 44 people were shot. The ABC morning show gave that 19 seconds. Over the July 4 weekend, there were 82 shootings. ABC gave that 11 seconds.

The Chicago Tribune reported the number of shooting victims between this year through August 14 is 1,254, more than half the number of shooting victims (2,185) reported for all of 2013. There were 89 homicides Chicago this summer, with 11 of those occurring in the first two weeks of August. ABC finds all this violence far too boring to notice. Blacks killing blacks is not important.

Wall Street Journal editorial writer Jason Riley said it perfectly on "Meet the Press" on Sunday. "Let's not pretend that our morgues and cemeteries are full of young black men because cops are shooting them. The reality is that it's because other black people are shooting them. And we need to talk about black criminality. Blacks are only 13 percent of the population. But they're 50 percent of homicide victims in this country and 90 percent of those victims are killed by other black people. We need to talk about that. ... The same weekend that this went down in Ferguson, we had 26 shootings in Chicago. But Al Sharpton didn't head to Chicago. He headed to St. Louis because he has an entirely different agenda, which is to continue to blame whites."

The Sharpton agenda and the media agenda are identical. As Andrea Mitchell replied ridiculously to Riley: "That is actually not his agenda, because he's actually there on a peace mission today."

We do not know if the cop was right to shoot Brown. The investigation should give us the answer. The news media have rendered their judgment. Ignorantly and maliciously.