Overdoing the Death of Robin Williams 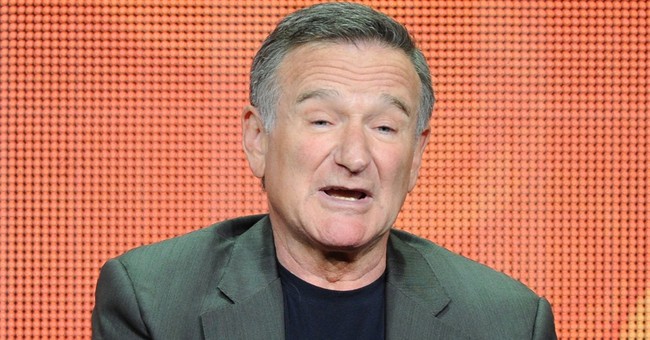 Trending
There was something thoroughly distasteful about that Robin Williams press conference the other day. It sounded wrong. It looked bad. It smelled.

Was it newsworthy, so much so that news networks would break into their regular afternoon programming to broadcast live the first official law enforcement press conference surrounding Williams' death? We think so. Williams was not just an iconic American comedian since he burst onto the scene with "Mork and Mindy" in the 1970s, he was perhaps the single funniest man in America. That he would die so suddenly understandably generated interest. When the word "suicide" appeared we became a nation of rubberneckers. We had to know what happened.

Actually there isn't a "need" to know, but the appetite is obvious. From Princess Diana to Michael Jackson to Heath Ledger to Philip Seymour Hoffman, the sudden, unexpected death of celebrities is a source not only of mourning, but also of great fascination. All the news networks showed up for live coverage because they knew their audiences were riveted to this story.

But how much should we be told?

Normally it baffles and frustrates when the official government spokesman approaches the massive bank of microphones and says -- nothing. His official statement tells you what you already knew, and when reporters attempt to gather details, they get bupkis."The investigation is ongoing." "I don't have details at this time." "We are not prepared to release that information at this time." The tone is monotonous, officious. Ten minutes after it began, the networks mercifully pull away as reporters scurry to make news out of what wasn't.

So when the Marin County coroner's office held a press conference 24 hours after Williams' body was discovered, to lay out the initial findings on this suicide, we tuned in expecting nothing more than the confirmation of what everyone already knew -- suicide -- with a barrage of questions providing little, or nothing else. Instead this time we got too much. Controversy erupted.

It didn't help that the press contact in this case seemed to be enjoying the spectacle. Before reading the first sentence in his statement, he had an announcement. "My last name is spelled B-O-Y-D," proclaimed Lt. Keith Boyd, with far too much brio in his voice given the topic at hand. At the end of his prepared remarks, he reminded the press that "Media inquiries should continue to be directed to me, Lieutenant Keith Boyd, via my email," and then he spelled that address out before taking questions, pointing at reporters with gusto.

The first rule of coroner public relations ought to be "never seem to enjoy sharing the specifics on someone's death." That should be followed by "and don't give specifics if you don't have the full story."

An investigation on a death such as this takes time. The toxicology report itself takes weeks. Given Williams' documented struggle with substance abuse, that is a necessary component in the full report. As well, there is a certain distance required between the initial news and its analysis when the news is this tragic. Imagine the Dallas police chief divulging to the public everything he knew about Kennedy's head blown off 24 hours after the assassination.

So it was shocking to hear the gory details -- especially when the story is incomplete. Not just that he hanged himself but how he did it. How exactly he was seated-but-not-really-seated. How the body was in a state of rigor mortis, which, of course, it was, and did he need to repeat himself, too. How he had cut his wrists, but how badly, he wouldn't say. How there was a knife nearby with "red" stains, which -- and this was infuriating -- is being tested to see if it's Williams' blood, as if it could somehow be anything else.

Was the star's privacy compromised? The coroner's office was legally obligated to release a report under the California Public Records Act, and the media's massive interest probably made a press conference unavoidable. But what was divulged crossed a line, and the public saw it. "The amount of info being given out about Robin Williams' death is shocking," wrote one woman on Twitter. Another added: "Why does the world need to know this??"