Hollywood Plays Around With Virginity 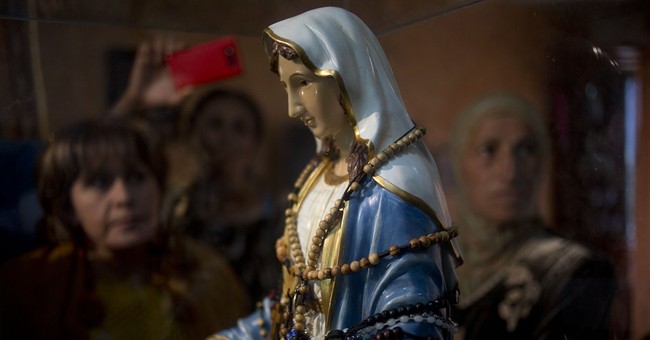 Back in the 1950s, C.S. Lewis saw chastity as under attack with "all the contemporary propaganda for lust that makes people "feel that the desires we are resisting are so 'natural,' so 'healthy,' and so reasonable, that it is almost perverse and abnormal to resist them."

You can now safely delete the word "almost."

Today virginity isn't a virtue but a burden. Chastity is a freak show and anyone who chooses to keep it is a carnival barker. In today's entertainment world, weirdos -- especially sexual weirdos -- drive a juicy plot, so virgins are in vogue, as a target or merely as an anthropological curiosity.

MTV has a new reality show called "Virgin Territory" where four young participants explain their "very tumultuous journey" in the "tricky world of virginity." MTV sells it as pathos: "Whether they're trying to lose their V-cards or keep them safely tucked in their pockets for as long as possible, being pure is really starting to grate on them."

MTV's Executive Vice President of Series Development Lauren Dolgen tried to make this sound like a public service. Because of a partnership with The National Campaign to Prevent Teen and Unplanned Pregnancy, she claimed, "MTV will continue this tradition by elevating the discussion of responsible sexual health to include the topic of virginity in a way that our audience might find surprising."

Translation: MTV's challenge is to find "a way" to introduce the virtue of virginity without projecting its virtue.

As TV critic Willa Paskin at Slate.com explained, the show "tries to get into psychological explanations for all of this unwanted virginity, because like the participants' friends, MTV thinks it's weird." Variety TV critic Brian Lowry nailed it on the head. "Some networks will pimp kids out -- under cover of sex education -- to score ratings."

Then there's the new film "Very Good Girls" in which two college-bound Brooklyn, New York, girls resolve to lose their virginity over the summer, but both target the same boy who vends ice cream at the beach. It's not a teen sex comedy; it's meant to be more profound. "When we lose our innocence, we have to find ourselves," announced the trailer.

Susan Wloszczyna at RogerEbert.com wasn't impressed. "(They) decide to relieve themselves of the burden that is their virginity," she wrote. To celebrate their decision, they strip down and run stark naked on a crowded public beach before leaping into the water." She called the film "a very bad excuse" to see the former child actress Dakota Fanning "flash her bare fanny, fondle herself provocatively and cavort in her underwear for no dramatic purpose." Director Naomi Foner Gyllenhaal described these two characters revolting against their virginity as "serious, interesting, committed girls about how they become women." She said this movie is rare, because women "don't often see themselves with any reality on screen."

There it is again. "Reality" is defined by Hollywood's sexual-liberation ethos. Women who decide to retain their virginity are somehow not "real" women and certainly can't expect to see their "reality on screen." The "contemporary propaganda for lust" just never stops coming.

Beth Baumann
Is AG William Barr on the Chopping Block?
Matt Vespa
The FBI Learned Quite a Bit Now That Hunter Biden's Alleged Laptop Is In Their Possession
Beth Baumann