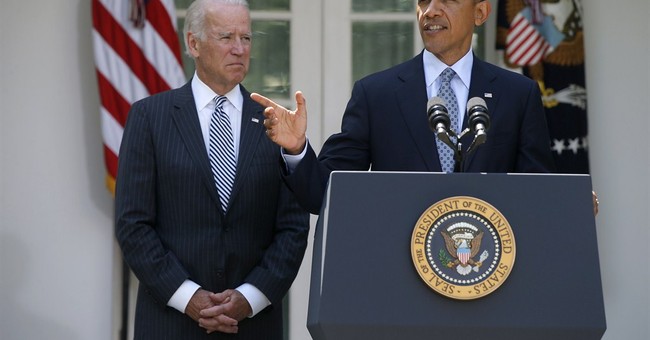 In the George W. Bush years, liberals were routinely shocked and awed that the Bush administration would obliterate their sacred wall of separation between church and state. They frowned on federal faith-based initiatives and worried about the bureaucracy being invaded by frightening people with college degrees from Christian schools like Liberty University, Regent University or Catholic University.

Government was no place to be spreading a dangerous Christian majoritarianism with a swaggering certitude that wouldn't tolerate opposing views and respect minority opinions. The media presented the Bushies as -- to quote a slur from NBC anchor Brian Williams -- "anti-gay, pro-Jesus and anti-abortion, and no gray matter in between."

But what happened when the Obama administration came in and imposed its own gospel, the good news of "LGBT inclusion"? Interviewing Hillary Clinton a few days ago, NPR host Terry Gross first honored her for really pushing socially leftist ideology as secretary of state, especially on transgender rights. "You added gender identity to the State Department's equal employment opportunity policy, and you made it easier for Americans to change their sex on their passport."

This spirit of the age was demonstrated at the vice president's mansion on Tuesday, where Joe Biden, who regularly boasts about his Catholic schooling (though apparently he learned nothing about Catholic thought), said hidebound old religious cultures had to be junked in every nation on the planet. "I don't care what your culture is," Biden thundered to about 100 guests, "inhumanity is inhumanity is inhumanity! Prejudice is prejudice is prejudice!"

We are counting the days until this buffoon is retired.

In this administration, there is no respect for opposing views on marriage or gender or homosexuality, especially those based on religion. They must be eliminated as "prejudice."

In 2011, the State Department created a public-private Global Equality Fund to subsidize leftist LGBT advocacy groups around the world. They boast they've "provided over $7.5 million to civil society in over 50 countries worldwide" to build an "organizational capacity for human rights documentation, advocacy, legal reform, and organizational development" and "to combat negative social attitudes and societal discrimination." How's that for a good use of tax dollars?

And that's not all. In 2013, the U.S. Agency for International Development created an LGBT Global Development Partnership that will "contribute $11 million over the next four years to advocacy groups in Ecuador, Honduras, Guatemala and other developing countries."

In his new book "Making Gay Okay," Robert Reilly offers an entire chapter on the promotion of this libertine-left agenda as a major objective of U.S. foreign policy. In El Salvador, acting ambassador Mari Carmen Aponte wrote an op-ed in a Salvadoran newspaper in 2011 titled "For the Elimination of Prejudices Wherever They Exist."

Aponte wrote: "No one should be subjected to aggression because of who he is or who he loves. Homophobia and brutal hostility are often based on lack of understanding about what it truly means to be gay or transgender," an ignorance spread by "those who promote hatred."

Which includes nearly everyone who promotes the Bible.

Around the world, the Obama administration has been thrilled to hold gay pride events at U.S. Embassies promoting the LGBT agenda, from Kenya to Laos to Pakistan. The State Department promotes the legalization and normalization of the whole libertine laundry list.

The leftist website Jezebel explained that this policy "could be seen as a new type of neo-colonialist interference by the United States." The developing world isn't developing fast enough for President Barack Obama, Biden, Hillary Clinton and now John Kerry. The U.S. message for a new American century? Religious people should just shut up, because "prejudice is prejudice is prejudice."