The 'Transgender Tipping Point' to Censorship 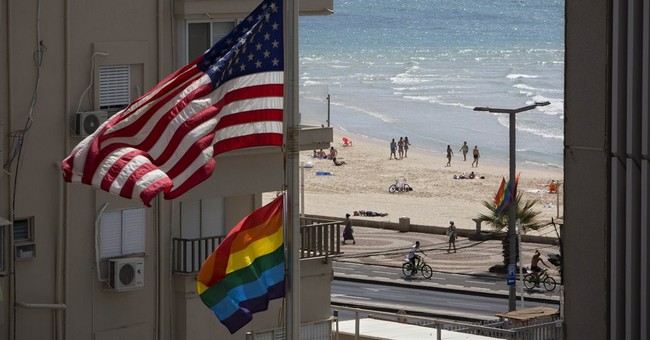 Trending
Now that our cultural elites feel they have sufficiently educated the public on the virtues of gays and lesbians, it's time to drill down to the next level. Here comes transgenderism. Time magazine placed "Orange Is the New Black" star Laverne Cox (born Charles Cox) on the cover as the face of "The Transgender Tipping Point: America's Next Civil Rights Frontier."

Cox wrote on Facebook that the Time cover was a wonderful present on her birthday, and "I realize this is way bigger than me and about a tipping point in our nation's history where it is no longer acceptable for trans lives to be stigmatized, ridiculed, criminalized and disregarded."

Beware of the words "tipping point." That means Americans will no longer be allowed to express dissent, moral or otherwise, about the choice to discard the oppressive "gender binary" and be whichever blend of genders you choose. Disagree, and you "stigmatize" and "dehumanize" people. You deny them "civil rights." You "criminalize" the innocent.

Washington Post culture blogger Alyssa Rosenberg celebrated this just like Time's helpful 1997 "Yep, I'm Gay" cover for Ellen DeGeneres. "Cox is helping viewers connect a set of issues that might have been abstract to them with the lived experience of someone they admire."

Or as NPR reporter Neda Ulaby instructed in a glowing profile of Cox, her women's-prison drama "'Orange Is the New Black' has won a Peabody for illuminating people too-often dehumanized by their incarceration or their perceived gender difference."

Once again, the show laughably calling itself "All Things Considered" kept its LGBT propaganda unfettered by any consideration of a socially conservative critique.

In response to Time magazine, National Review's Kevin Williamson wrote a column with the apparently inflammatory title "Laverne Cox Is Not a Woman."

Not only did Williamson strike a blow for reality, he dared to write, "The mass delusion that we are inculcating on the question of transgendered people ... would impose on society at large an obligation -- possibly a legal obligation under civil-rights law, one that already is emerging -- to treat delusion as fact, or at the very least to agree to make subjective impressions superordinate to biological fact in matters both public and private."

The Chicago Sun-Times reprinted this, and then the censorship group with the Orwellian name GLAAD cranked up its outrage. The intolerants forced the Sun-Times to banish the article from its website and confess obsequiously, "Upon further consideration, we concluded the essay did not include some key facts and its overall tone was not consistent with what we seek to publish."

GLAAD's chief whip-cracker Sarah Kate Ellis insisted that stating Cox was not a woman was "ugly and insulting propaganda," and "dangerous to readers' understanding of who transgender people are." Biologically sound dissent is not to be allowed. "These harmful messages about the validity of transgender identity have no place in a credible mainstream publication."

For the full nuttiness of today's gender-bending left, consider GLAAD's conclusion: "Kevin D. Williamson is not the arbiter of who is a woman, nor is the Chicago Sun-Times. It is beneath any reputable national journalistic outlet to reprint such dangerous and false rhetoric."

Don't look at your genitals. Truth is falsehood, and falsehood truth.

GLAAD also forced the firing of a Rochester, New York, radio-show duo who mocked that city's decision to use tax dollars to fund "gender reassignment surgery" for its transgender bureaucrats. The station owners at Entercom Communications apologized profusely: "Their hateful comments against the transgender community do not represent our station or our company."

GLAAD is rising, and freedom of speech in America is dying. Everyone must promote only the glorious fluidity of gender narrative.