Obama and the 'Hipster Elite' 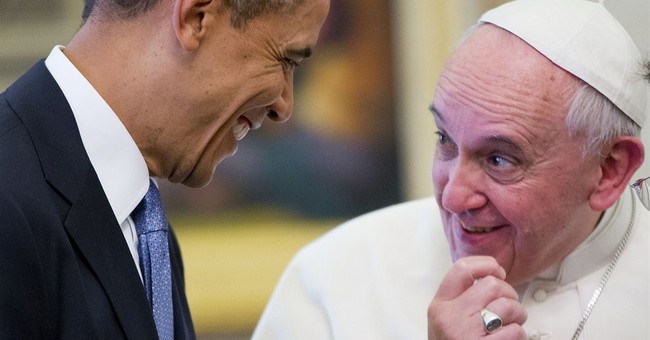 Politico reported something interesting before President Barack Obama met with Pope Francis: "The visit is a rare chance for Obama to associate himself with a world leader whose cool factor far outweighs his own."

It's rare for pundits to admit that someone else might top their revered Barack in the coolness category. They're equating coolness and popularity, and the pope certainly polls much better than the president, which is no surprise these days.

But Francis is cool.

It is a terrible indictment of our culture that what is deemed to be "cool" by the media becomes so important in our national discourse. "Coolness" elects presidents. Fox News personality Greg Gutfeld has a new book out called "Not Cool: The Hipster Elite and Their War On You."

On Fox Business, Gutfeld explained, "You hear John McCain was a war hero. He was a prisoner of war, but he was an old white guy. That's not cool. So, you vote for the young, historically significant candidate, so that election I believe was based on making a cool choice."

And in 2012? "I think it happened again with Mitt Romney, who is a capable person. He was a governor, he was a businessman but he was boring and he's a Mormon. That's so boring and you want somebody edgy and interesting, and again, if you didn't vote for the cool person you could also be called a bigot."

If the closing weeks of the 2012 campaign were a coolness contest, Romney was not only routed; he surrendered. Every "cool" place Obama went, Romney didn't dare to go. For Obama, it was the softest of softballs for interviews. For Romney, every stop was a potential bear trap.

Obama went to Nickelodeon to be interviewed by liberal former TV news reporter Linda Ellerbee and children. Romney did not. Obama went on MTV to be interviewed by veejay Sway Calloway and college-age voters. Romney would not. Obama was fawned over by David Letterman. Time magazine described it as "pretty much like a stump speech with prompts from Letterman and commercial breaks." Romney, who knew Letterman hated him, did not. Obama was doing radio shows Romney wouldn't touch, like Miami's "Pimp With a Limp."

The result of a coolness gap? Obama beat McCain in the 18-to-29 demographic in the exit polls by 66-32 in 2008, and then thumped Romney 60-37 in 2012. This explains why, as Obamacare sinks, Obama's back on "The Ellen DeGeneres Show" and phoning in to Ryan Seacrest's radio program and exchanging quips on "Between Two Ferns" with comic actor Zach Galifianakis. It underlines the limited power of coolness: Young voters picked Obama and now reject signing up for Obamacare, when he really needs them.

The dignity of the office is in shambles. But man, the dude is cool.

One can imagine that young voters with rising health-care premiums and insane levels of college-loan debt might turn on Obama as time goes on. But that hipster elite packs a wallop of media power. They can't make socialism work, but they can make it sound awfully hip for a while.