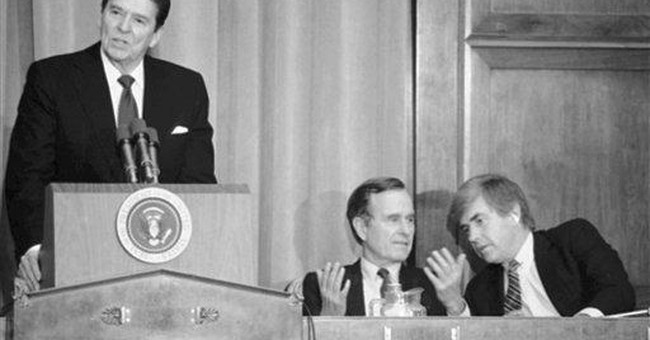 The year was 1987 and the Reagan administration had announced the INF Treaty to limit short-range nukes. Many conservatives were opposed. I elected to host a press conference to make that point publicly.

The night before, we met privately. As ringleader, I issued a directive: No attacks on Ronald Reagan. Our beef was with the treaty, not with the Gipper. My co-conspirators agreed unanimously. But while we were meeting President Reagan was sitting down for an interview with Tom Brokaw and said about conservative opposition, "Some conservatives just believe in the inevitability of nuclear war."

Bad choice of words. The next morning conservatives were furious, none more than the late Senator Malcolm Wallop, who broadsided the president from the Senate floor. As we assembled for our press conference, I withdrew my edict. Anyone who felt the need to respond to Reagan had the right to do so. It was decided that three of us would speak on behalf of everyone.

Now here's a little bit of inside baseball about press conferences. It matters not a whit what you say. Reporters cover events but transcribe only soundbites. For speakers vying for coverage, the rule is pretty solid as well: He with the best one-liner wins.

I led off, and my statement contained the sentence that I delivered with brio and knew was sure to stick. Very satisfied, I sat down, but not before introducing Richard Viguerie, the patriarch of the "New Right" re-birth of the conservative movement. He didn't have a statement, just a little card containing one sentence. His attention-grabber line was twice as good as mine, which he delivered with double the brio. Advantage: Viguerie.

We turned the podium over to Howie Phillips. Within a minute he had delivered his sound bite. Viguerie and I, seated at the head table on either side of the lectern, leaned our chairs back, looked at each other and silently nodded. We knew Phillips had scored the knockout. "Reagan is a useful idiot."

All hell broke loose. All day we were peppered with questions from the press after being denounced by the White House. That evening, Viguerie and I were guests on CNN and anchorman Bernie Shaw eviscerated us. That was it. We asked Phillips to join us for breakfast the following morning.

Serious and worried, we told our friend it was time for serious damage control. The options: One, apologize. Whatever your intent, this is perceived as a personal insult and no one, most especially Ronald Reagan, should be insulted by us.

Two, clarify. We know what you meant. Lenin called Soviet sympathizers overseas "useful idiots." What you meant was that Reagan unwittingly is doing the bidding of the Soviets now. Call it a bad choice of words. Re-phrase your point.

We should have known better. Phillips met our worried disposition with a beaming, crooked smile and twinkling eyes. "Or three, stand by my words!" he said before erupting in laughter.

It doesn't matter what you think of his answer (obviously I didn't agree). It was a quintessential Howie Phillips moment: Confident, cocky, carefree.

It is a sad commentary on conservatives' sense of their own history that many may not know the name Howard Phillips. He, along with Viguerie, Terry Dolan (another name unknown to most in the movement), Paul Weyrich and Ed Feulner, was the founder of the New Right juggernaut that delivered Reagan. As a political force, they created the conservative movement that exists today.

The goal of the New Right wasn't merely to fight the establishment. It was to create a conservative counter-establishment. As opposed to today's movement, they didn't play defense, fidgeting and dithering about Sen. Harry Reid, tax increases, and Iran. They relished offense and weren't satisfied until Sen. George McGovern was again a private citizen, taxes were slashed, and the Soviet Union destroyed.

They were happy warriors. As opposed to so many of today's conservatives, worried that American exceptionalism cannot be redeemed and so depressed by the prospect, those conservatives saw unlimited possibilities. Whittaker Chambers famously had told Phillips' generation that in abandoning communism, he was leaving the winning side for the losing cause. Some conservatives accepted that depressing outlook as inevitable. The New Right rejected that thinking entirely -- and did so with gusto, what good men do when they are committed to principle and unafraid.

Most amazing, this merry band of brothers was just that -- a band. By today's standards, the New Right was never really a movement. It was a dozen or so leaders, with a dozen or so organizations, with maybe two-dozen dollars to spend. What should have been a blip became a seismic explosion. They were revolutionaries, the political arm of the movement that ushered in the Reagan era.

Most conservatives wouldn't be here but for men like Howard Phillips. They are his legacy. RIP.

DCCC Torched Over Tweet Claiming Republicans Are the Ones 'Interfering in Your Private Medical Decisions'
Rebecca Downs
Pennsylvania School Board Member to Parents: 'I Don't Work for You'
Landon Mion
Joe Biden on 2022 Midterms: 'We Have to Expand Our Majorities,' GOP is 'Completely Controlled' By Trump
Rebecca Downs
Australia Radically Changes COVID Policy As Omicron Sweeps Through Nation
Matt Vespa
Russian Government Reportedly Attempting to Install Pro-Russian Leader in Ukraine
Rebecca Downs
This Sloppy Pro-Biden 'Brandon' Ad is So Bad, It's Hard to Tell Who It's Supporting
Rebecca Downs