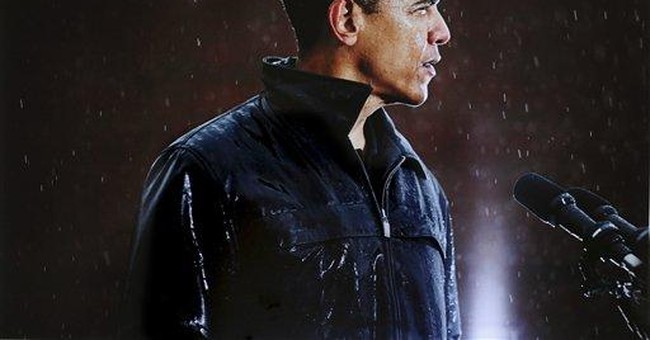 Trending
Once upon a time, it meant something for a reporter to be called a "Pulitzer Prize-winning journalist." The prestige of this designation is quickly eroding. The 2012 Pulitzer Prizes looked less like an excellence-in-media competition and more like an exercise in leftist self-affirmation. No prize established this more strongly than the coveted National Reporting prize going to ... The Huffington Post.

The Pulitzer judges who would rather swallow rat poison than give an award to a conservative outlet, such as The Washington Times, are bestowing kudos on a site that thrives on such celebrity dreck as "Miley Shows Off Legs in Lacy Shorts" and "Kim Kardashian Kanye West Earrings: Reality Star Sports 'KW' Initial Jewelry."

The prizewinner, "senior military correspondent" David Wood, has been at The Huffington Post for about a year. He won the Pulitzer by reporting on the struggles of veterans and their families. It's a worthy subject but also something pretty much every other media outlet has tried to cover over the last 10 years. There's nothing here worthy of a National Reporting prize. What the Pulitzer Prize judges are doing is exactly what the Obama White House did right from the start -- mainstreaming the Huffington Post. Obama took questions in a press conference from Huff-Post political reporter Sam Stein to add prestige to Arianna Huffington's liberal imitation of the Drudge Report. A Pulitzer seals the liberal deal.

The website congratulated itself with a quote from Rem Rieder, editor of the American Journalism Review. "I think it's very healthy to see the Pulitzers have moved, albeit slowly, from a solely print focus," Rieder said. "The world has changed dramatically. There's an awful lot of exciting developments with digital news operations."

But they also quoted leftist professor Jay Rosen oozing about how "old media" and "new media" are now meaningless terms. So now heavily opinionated and oftentimes downright sloppy liberal reporting -- commentary, really -- from the Huffington Post and Politico (which won the editorial cartooning prize) can be defined as part of the establishment.

The Pulitzer judges even bestowed an imprimatur on The Stranger, a Seattle alternative weekly rag edited for six years by radical sex columnist Dan Savage. Eli Sanders won the feature writing category for a story on a horrific local double-rape of two lesbians, one of whom was stabbed to death.

The Stranger staff's reaction to the Pulitzer wasn't solemn. Big surprise, that. Their website quickly added "Winner of the Pulitzer Prize" like a slogan and asked on their blog, "Hey, Eli: Is that a Pulitzer Prize in your pocket, or are you just happy to see us?" Unless I miss my guess, this is the first Pulitzer Prize for a newspaper that also operates an annual home-video pornography competition (called the Hump! Festival).

The liberal tilt carried over to the book prizes. The history prize was awarded to the late radical Manning Marable for a biography of Malcolm X. Marable's other works include "How Capitalism Underdeveloped Black America" and "Speaking Truth to Power: Essays on Race, Resistance, and Radicalism." Guess where he fell on the spectrum -- if he was even on it. In his last book, Marable complained that Malcolm's autobiography was mangled by that "liberal Republican" Alex Haley and became a work in "the tradition of Benjamin Franklin's autobiography" rather than "a manifesto for black insurrection," which Marable desired.

The general nonfiction prize went to Stephen Greenblatt at Harvard for "The Swerve: How the World Became Modern." Greenblatt tells the tale of a book hunter named Poggio Bracciolini and how he preserved the work of the atheist Roman poet Lucretius, a poem called "On The Nature of Things."

The Pulitzer website oozed that Lucretius wrote "a beautiful poem of the most dangerous ideas: that the universe functioned without the aid of gods, that religious fear was damaging to human life." The priest and scholar Father Robert Barron, a fan of Greenblatt's previous book on Shakespeare, found this book's anti-religion, anti-Catholic thesis not only incorrect but also exasperating. "Modernity emerged out of a long twilight struggle with a supreme enemy ... Roman Catholicism! This is one of the great myths of the secular academy."

The Pulitzer juries are just like other liberal media collectives. Marable's book made the Top Ten Books of 2011 at The New York Times. Greenblatt's book was celebrated twice by National Public Radio (the book critic said it made her "shiver" as she read it).

It's amazing that liberals have cartooned conservative thinkers as locked in a bubble or an echo chamber. These cheapened "prizes" expose the airless insularity of today's leftist journalism.

Andrew McCabe’s Lawyer Thinks Fox News Is in for a ‘Legal Bloodbath’ Over Wuhan Virus Coverage
Redstate
De Blasio: I may have to shut down your churches and synagogues “permanently”
Hotair