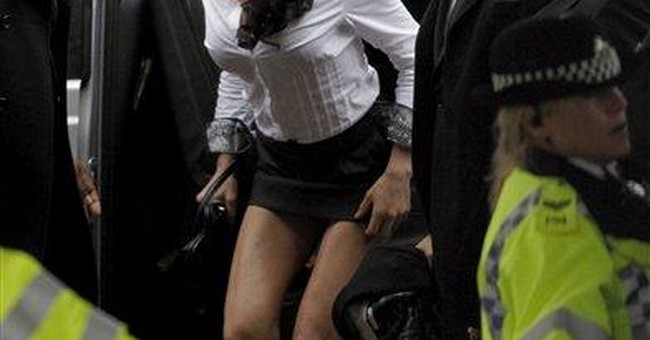 Great Britain has a new coalition government of Conservatives and Liberal Democrats, and what a mess it is as they face the largest budget deficit in Europe. Where, oh where, will they cut the budget? Horror of horrors, one obvious target is funding for the arts "in the land of Shakespeare." When the Empire is so broke that National Health Service is refusing people hip replacements, it's probably not a good idea to suggest it's more important to fund the ballet.

Especially when the government-bankrolled ballet is "The Spirit of Diaghilev."

Anthony Faiola of The Washington Post reports the usual line we hear in America about arts funding, that taxpayer monies provide artists with "independence," and all that blather. But then he quite seriously maintains that government is a "beacon for controversial pieces, such as one staged last year at Sadlers Wells in which" -- are you ready for this? -- "the pope sexually abuses an altar boy through an interpretive dance."

That's putting it mildly. As the Daily Mail more accurately reported last November, "The BBC has dropped plans to air a controversial ballet after discovering that it features a deformed Pope who sexually abuses altar boys and rapes pregnant women. 'The Spirit of Diaghilev' prompted boos and a walkout from some of the audience last month when it premiered at Sadlers Wells in London."

The BBC had already announced it would televise the production without learning the whole sordid story. The piece was commissioned by the government and planned for airing on BBC before "the finer details were established." The "Spirit" piece contains four different dance programs, and the hateful one was "Eternal Damnation to Sancho and Sanchez" by Javier de Frutos.

Would Faiola and Co. be so enthusiastic if the story line featured an imam abusing little boys and raping pregnant women?

Amazingly enough, this sexually graphic exercise in anti-Christian bigotry was given a family-hour spot on BBC4, according to a spokesman, "because ballet at this time of year is a family thing. You sit down together and watch." For his part, de Frutos was angry at how naive the BBC was to assume it was family-friendly "just because it was ballet. People just simply assumed, and you should never assume in art."

The BBC acknowledged they decided not to air the program because it was the Advent season and "was essentially part of our Christmas schedule." Millions of taxpayers sent in their pounds to see their faith pounded by filthy "artistic" bullies. But at least it wasn't waved in the faces of their children.

The Washington Post tried to make the case for Britain's arts bureaucrats, making a list of all the glowing talents that the government helped along. We're told Grammy-winning singer Amy Winehouse began her musical career at the National Youth Jazz Orchestra. After one wildly popular album, Winehouse is now best known as a raging tabloid cartoon of chemical dependency. Is she really the best poster child for keeping a ballooning deficit?

When a country's financial ship is sinking, is it really important that the government might not foster the next Sam Mendes, the director who won an Oscar for the morally appalling film "American Beauty"? That's more of an argument against than for subsidies.

Arts lobbyists seriously believe that a ballet is just as important as a hip replacement. They refuse to submit to the notion that the arts can be seen as less essential in the grand scheme of government than anything else.

But it's easy to argue that it's less essential than everything else.

The Post story acknowledged that the new government in Britain is saying the budget cuts aren't temporary and they are calling for a permanent shift toward the American model of mostly private philanthropy for the arts. Ed Vaizey, the government's new culture minister, insisted the best works would find a private sponsor -- even if the works savage the private sector. He noted the case of "Enron," a British play that started in government-funded theater before finding private backers despite the "anti-capitalist themes."

London's arts advocates shouldn't be gloomy. Anyone who's followed Hollywood knows that large entertainment conglomerates instinctively genuflect in their support for perverted "artistic" themes and have no trouble supporting anti-capitalist diatribes (see the entire career of Michael Moore). In fact, they'll probably learn to whisper into the ears of Bill Maher and get their pope-bashing ballet to air in prime time on HBO.