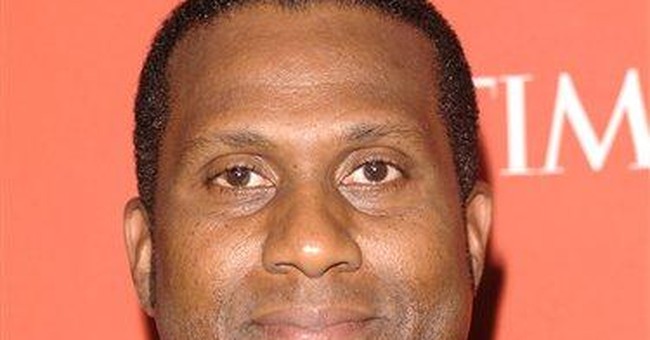 PBS station managers made a big push last year to drive any trace of "sectarian" Christianity out of the taxpayer-funded broadcasting system, banning any church services or religious lectures that appeared on a handful of stations. They ultimately compromised and banned any new church programming. But on at least one program, PBS sounds like it's declaring war on Christianity, including smears on Christianity that are not based on reality.

If that sounds shocking, imagine what the average Christian PBS viewer might have thought as he watched Tavis Smiley's weeknight talk show on May 25. The guest was ex-Muslim and atheist author Ayaan Hirsi Ali, there to promote her latest book, "Nomad." Smiley claims to be a Christian, but he attacked Ms. Ali for "idealizing Christianity" and recklessly turning people away from Islam.

Right out of the box, Smiley was out to make a point. "You say unapologetically and rather frankly that your mission here is to inform the West about the danger of Islam," he began. "What danger do we need to be made aware of?"

What? Did Tavis Smiley somehow sleep through 9/11? Is PBS keeping him locked in a closet where he remains unaware of the ongoing terrorist attacks on Americans -- successful and unsuccessful -- made by Islamic radicals? When Ali brought up the deaths of 13 at Fort Hood and the failed Times Square bomber, Smiley unloaded a literally unbelievable statement: "But Christians do that every single day in this country."

Ali replied: "Do they blow people up?" Smiley: "Yes. Oh, Christians, every day, people walk into post offices, they walk into schools, that's what Columbine is -- I could do this all day long."

Smiley is not only wrong, he's perversely wrong. The boys who shot up Columbine High School were not Christians; they were just violent psychopaths who, among other evils, mocked students who cried out for God to save them. There aren't Christians walking into post offices or schools every single day in America and blowing people up. Anyone in charge of journalistic integrity at PBS should see this as a blazing inaccuracy, in addition to a religious smear. Men this dishonest should be kept from microphones, not hired to speak into them.

Who would have thought that anyone would outdo Rosie O'Donnell, who insisted radical Christianity was "just as threatening" as radical Islam?

Ali calmly explained that Christians are far more tolerant. They take abuse on television programs without threatening to blow up Comedy Central offices or promise Daniel Pearl-style decapitations for executives. She acknowledged "not all Muslims are terrorists, we must emphasize that, but almost all terrorist activities that take place today in our time are done and justified in the name of Islam."

This caused another burst of illogic from Smiley, who compared the Fort Hood attack to the tea party activists protesting ObamaCare on Capitol Hill. "There are folk in the tea party, for example, every day who are being recently arrested for making threats against elected officials, for calling people 'n----r' as they walk into Capitol Hill, for spitting on people."

Put aside the thoroughly unproven accusations, now that Rep. Emanuel Cleaver has backed off the story of conservative spitters, and there is no audio or corroboration of the accusation of N-words being thrown. Had those events actually happened, would they in any way have been comparable to murder?

PBS has an ombudsman now to receive public complaints. Michael Getler should hear from across the country, from Christians and non-Christians alike, that Smiley must provide a retraction and an apology for his scurrilous and bigoted remarks against Christians and the billions that practice that faith. PBS stations across the country accept millions in funding from good-hearted Christian taxpayers who don't deserve to see allegedly "public" broadcasting attacking their integrity.

People in public broadcasting boast in their pledge drives, direct-mail fundraising letters and congressional testimony that they are an oasis of civility and intelligent discourse. But they host and help fund the unintelligent, inaccurate garbage coming out of the mouth of Tavis Smiley. This trash belongs in the Dumpster.