A Stomachache for Our Sponsor 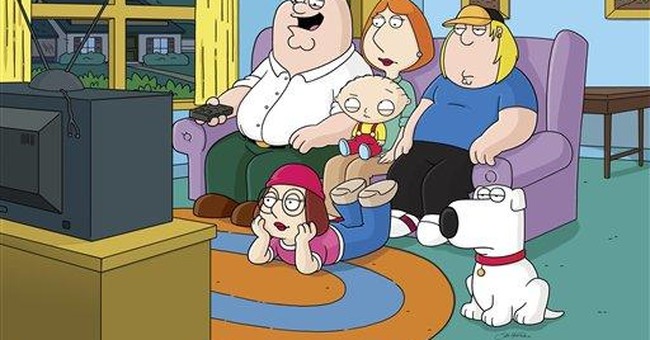 In the earliest days of television, shows were often supported entirely by one sponsor. There was the "Texaco Star Theater" with Milton Berle. Remember "General Electric Theater" with Ronald Reagan? The corporate patron was held responsible for the content within the program. More to the point, the corporate patron wanted the association with the show it was sponsoring.

Perhaps the best branding of them all was and is Hallmark, with its Hallmark Hall of Fame movies. When that movie airs, you just know it's a quality movie because that's all Hallmark will produce.

So it is refreshing to learn that Microsoft has backed out of a deal to be the sole sponsor of a commercial-free special on Nov. 8 called "Family Guy Presents: Seth & Alex's Almost Live Comedy Show." For a change, Microsoft executives attended the special's taping Oct. 16, where "Family Guy" creator Seth MacFarlane and comedienne Alex Borstein (the voice of "Family Guy" matriarch Lois Griffin) would pitch the debut of Windows 7 software to the audience.

There was only one problem: MacFarlane's repellent sense of humor and complete lack of taste. Variety reported Microsoft may have walked away since there were "riffs on deaf people, the Holocaust, feminine hygiene, and incest." They added that the animated portions of "Almost Live Comedy Show" were the tamest parts of the show. "It was the live-action segments (such as one in which MacFarlane and Borstein play Latino housekeepers) that probably raised the most eyebrows." The Los Angeles Times said those characters were housekeepers for Miley Cyrus, and they were scorching the Disney teen star. Microsoft sent MacFarlane and Fox chieftains several notes expressing their concern over the show's contents, but ultimately decided just to wave a white flag and drop out.

It's a safe bet that MacFarlane wasn't going to genuflect for anybody. After all, Fox is so indulgent of this spoiled Peter Pan that his live special and his incessantly vile cartoons are the entire Sunday night lineup. The only thing missing was an entire "Fox News Sunday" devoted to "Family Guy" plugs; maybe also a couple of shamelessly promotional NFL halftime shows, complete with wardrobe malfunctions.

To be sure, Microsoft put out a strange statement: "We initially chose to participate in the Seth and Alex variety show based on the audience composition and creative humor of 'Family Guy,' but after reviewing an early version of the variety show, it became clear that the content was not a fit with the Windows brand."

Variety suggested Microsoft "may have been optimistic" in "believing that MacFarlane and Borstein wouldn't be as raunchy in live performance as their animated alter egos are on 'Family Guy.'" But Microsoft's statement embraced the "creative humor" of the cartoon. That's an understatement: Microsoft has spent close to $5 million on commercials in "Family Guy" on Fox, and TBS and Cartoon Network, which carry reruns of the show.

So Microsoft is both supportive and offended by the same show?

It's fair to conclude that Microsoft found it safe to buy ads on "Family Guy" when it was but one of 12 advertisers of the show. Now it would have to stand alone, the sole sponsor.

This doesn't mean that Microsoft didn't retain the rest of its deal with Murdoch properties, including Fox Sports, FX, Hulu, FoxSports.com on MSN, even a 12-week college tour sponsored by Fox Licensing and Merchandising -- featuring events such as "Family Guy"-themed movie nights. Microsoft's statement suggested they didn't want any hard feelings for stepping away from what the "talent" was producing: "We continue to have a good partnership with Fox, Seth MacFarlane and Alex Borstein and are working with them in other areas. We continue to believe in the value of brand integrations and partnerships between brands, media companies and talent."

As for the live special, with all the incest, Holocaust and Latino-housekeeper-for-Miley-Cyrus jokes presumably intact, Fox did find another sponsor, right there in Hollywood. It's Warner Brothers, seeking to promote the Christmas Day debut of its new movie version of "Sherlock Holmes."

It's quite amazing to see how low Warner Brothers can go: from the makers of Bugs Bunny to the enablers of Holocaust and incest jokes on prime-time Sunday night TV.