Castration: The Next TV Frontier 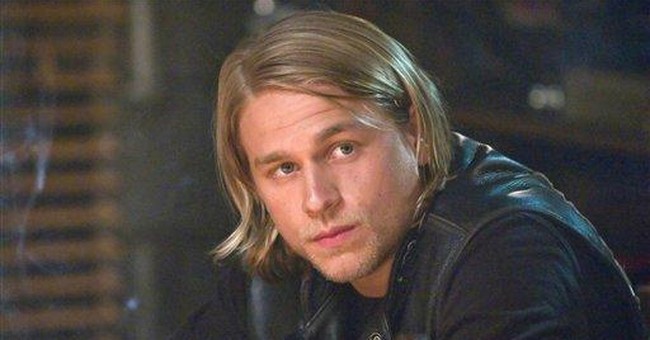 The temperature has cooled, the leaves are turning colors, and the new fall television season has begun. Enter the mudslide. The Shock and Awe manipulators have been unleashed to air evermore graphic sex and grotesque violence -- and, predictably, a combination of the two. The first "winner" in this race to the bottom was the FX cable channel, another sure bet. On Sept.17, viewers of the appropriately named new series "Sons of Anarchy" were "treated" to a graphic castration scene, complete with hacked-off genitals shown lying in a pool of blood.

Completely tasteless programming is in, and FX bathes in it. The mastermind of all that Rupert Murdoch-backed villainy is an executive named John Landgraf, who pronounces his philosophical approach thusly: "One of our writers used to say, 'Bad men do what good men can only dream about.' There is a sense that what these characters are doing is allowing us to explore, in a safe context, our id and subconscious, what we might do if there were no restraints of society or conscience on us.''

Defenders of graphic violence in television or films insist that the power of these images do not corrupt. A person can view these programs without dreaming those dreams or acting upon them. But it's pathetic to argue that Hollywood is somehow performing a public service, taking the violence out of society, so as to "allow us to explore in a safe context" how much we'd like to castrate someone.

No one should attempt to argue that "exploring our id" is a socially constructive crusade instead of a cynical attempt to shock your way to some extra ratings points, at least not without a laugh track attached.

It might be amusing to watch a Hollywood executive try to argue before a minister that allowing someone to fantasize about unleashing his violent subconscious is a path to holiness. Most ministers would reply that someone who constantly dreams about committing violent acts, but never actually does it in real life is not a "good" person. They would see a flaming sinner with a socially helpful amount of cowardice.

Landgraf's brazen attempts to play a moralist suggest a different maxim, one that fits a Hollywood executive: Bad men corrupt good men by bombarding them with entertainment that shocks them so aggressively and consistently that they're programmed to seek out an ever edgier, more graphic "entertainment" experience.

FX's "Sons of Anarchy" is another series about antiheroes, in this case a northern California motorcycle gang and criminal enterprise. Unsurprisingly, the show erupts from a man named Kurt Sutter, a longtime scriptwriter of the gruesome FX crooked-cop series "The Shield." Sutter admitted -- boasted, really -- to the Miami Herald that he's trouble: "My sensibility is really twisted and dark ... Every story pitch that ever got me thrown out of a meeting, I put in 'The Shield.'" Sutter was the source of two of the most notorious scenes in that show, the melting of a drug dealer's face into an electric grill burner, and a police captain being forced to commit an act of oral sex on a gang member at gunpoint, with all its revolting head-bobbing.

Sutter told the Herald's Glenn Garvin that FX executives patiently ask him to consider that not yet everyone shares his "vision," and so he has to move a little slower. "The notes weren't saying, 'don't do it,' but 'we want to honor your vision; now how are we going to photograph it?'" he recounted. "I lose perspective of people's capacity for watching violence. I just do. . . . I really need somebody to say, 'You can't do that. You don't want to turn people off.'"

In a nutshell, what we're hearing is FX executives who have a lot more sensitivity to the "vision" of a seriously twisted human being than they do to the prospect of a 10-year-old boy finding a terrifying castration scene as he's flipping channels in his home.

As usual, the TV critics are almost as sick as the alleged visionaries of Tinseltown. Associated Press critic Frazier Moore oozed about "Sons" that "FX is adding to its roster of outstanding dramas that showcase fascinating anti-heroes who buck the system, doing some good but leaving plenty of collateral damage. They are shrewd go-getters who, more than anything, keep creating problems for themselves."

Moore doesn't mention the castration scene, but he seems to suggest that it's just another example of "shrewd go-getters" bucking the system.

Once again, the gruesome unfolding of a pervert's mind onto a national television screen underlines the need for the cable industry to provide a system of consumer choice, where parents have some ability to pick and pay for the cable networks they want, and not subsidize the twisted Wizards of Id at networks like FX.