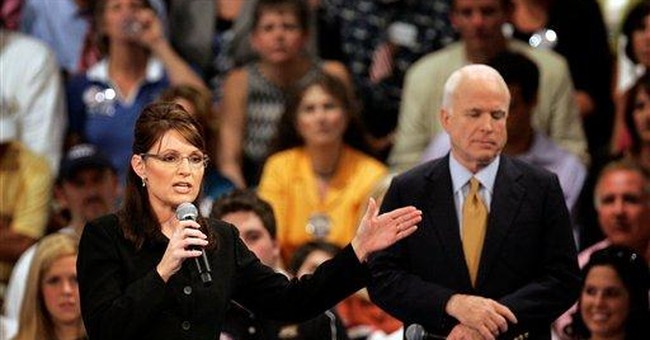 The McCain campaign went looking for a major anchor to be awarded the blessing and the curse of the first Sarah Palin interview -- a blessing for ratings and a curse from all the competitors who would accuse the winners of being soft on Republicans. At CBS, Katie Couric had wallowed in fan-club-president questions to Hillary Clinton about her "pure stamina," so she couldn't be first. NBC's Brian Williams kept asking Barack Obama those hardballs about how his late mother would swoon over the latest glowingly positive "news" magazine cover. How hard was it to pick Charlie Gibson on ABC?

Of the three anchors, Gibson is the one with the longest career in the hard-news trenches. The McCain people knew Gibson was not a "friendly." They knew Palin's first interview was going to be a grilling -- not just because the media saw her as untested, but because of the enormous liberal-media peer pressure to puncture her popularity.

It's not unlike the attitude that greeted conservative Gov. John Sununu of New Hampshire when he came to Washington to be Bush 41's chief of staff in 1989. Ben Bradlee, then the executive editor of The Washington Post, offered the Los Angeles Times his less-than-humble opinion: "A jack-leg governor from a horse's ass state. How could he play with us in the big leagues?"

But play Sarah Palin did. Nothing really shook her. She hopped right off the grill. That, of course, is not what the media are spinning.

The first alleged gaffe in Palin's interview with Gibson was when he pressed her to offer her opinion on the Bush Doctrine. She asked for clarification: "In what respect, Charlie?" Gibson saw the opening and pounced: "What do you interpret it to be?" He then clarified that he meant the 2002 version of the Bush Doctrine, the willingness to wage a pre-emptive war. But even the front page of the Washington Post conceded there were many versions of a Bush doctrine, so it's not a sign of ignorance to ask for clarification.

Does anyone believe that if Barack Obama had picked Kansas Gov. Kathleen Sebelius as a running mate, Gibson would have tried to embarrass her about which Bush Doctrine she thought was the Bush Doctrine? It would have been a trip through Candy Land by comparison.

But the biggest hot button for liberals in Gibson's interview was pressing Palin on a prayer she offered at her church, a prayer of hope that by their sacrifice, our American troops are "on a task that is from God." When the video was revealed by the Obama-lovers at the Huffington Post, an anonymous political operative told NBC "It's pretty uncomfortable stuff ... It's bad. It's really bad." In the Twilight Zone of liberalism, asking God to guide and support American troops is somehow "really bad."

Gibson ran the clip and asked, "Are we in a holy war?" Palin answered calmly that she was praying not as if God was on our side, but hoping that we are on God's side. Despite her explanation that she did not know the mind of God, Gibson wouldn't let up: "But then are you sending your son on a task that is from God?" She said she didn't know, but she was so proud.

Palin fans were pulling their hair out by this point. In March, when it came to questions about Obama's venomous Rev. Wright, the one who thought America deserved 9/11 and that the U.S. government invented the AIDS virus to kill blacks, Gibson could only offer Obama his most supine congratulations on his "extraordinary speech on race," and gently nudge: "Can you understand why many, particularly white voters, are so repelled by the remarks that he has made?" Gibson didn't ask whether Obama thought our foreign policy was worthy of God's wrath.

Gibson would never be punished on the cocktail circuit for going easy on Obama. Not so with Palin. Had he offered her anything less than the browbeating, professorial tone and glare, coupled with the growling-dog questions, he wouldn't have been able to show his face in Manhattan.

It's a shame the roles in this interview couldn't be switched. Palin could have turned around and asked Gibson about his qualifications to lecture our commanders, whether he thinks any war, anywhere, is ever worthwhile. In 2003, he told Larry King "We used to have a little framed sign hanging in our bedroom, my wife and I, that said, 'War is not good for children and other living things,' and I believe that."

That is not only the philosophy that dominates the media, it's going to be the liberal expectation if President Obama takes the oath: that ridiculous "war on terror" is over, and it's peace in our time. All we'll have left is our prayers.

Despite Terrible Inflation Report, Biden is Moving Forward With Big Spending Plans
Katie Pavlich
Here's What's At Stake If Smith and Wesson Loses Its Case Against New Jersey
Matt Vespa
The Latest Leftist Takes on the Iron Dome Are Quite Something
Katie Pavlich
Whitmer Moves to Shut Down Canadian Oil Pipeline. The Company Is Having None of It.

Here's What's At Stake If Smith and Wesson Loses Its Case Against New Jersey
Townhall
'Our freedoms do NOT belong to you': Hillary Clinton just absolutely REKT for sending completely tone-deaf tweet on vaccinations and LOL
Twitchy
'Antiracist' Doctor Finds Little Sympathy After Rant on White Woman Who Asked if She Was a Retail Clerk
Redstate
The COVID-19 Test No One Is Talking About: Make Sure Your Children Have It Before They Are Vaccinated
PJ Media