Who Dares Oppose the Obamas? 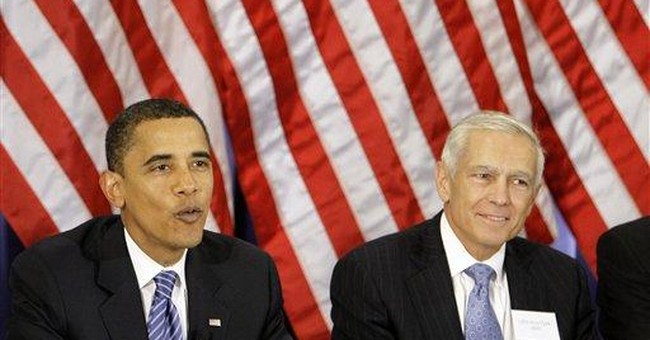 In the thick of the fight over the wrong Reverend Wright, Barack Obama put on his annoyed face and said the whole issue of his preacher's hate speech was a distraction from the real issues, like health care and education and war. So many in the media were quick to agree. But now that the primaries are over, the network news crews aren't covering the issues. They're warbling a happy tune about all of Barack and Michelle Obama's wonderful personal qualities.

Think of all the inane stories designed to boost the picture of Obama being loaded with charisma and momentum. All "news" that is good is presented with great enthusiasm -- like the utterly unsurprising and uninspiring endorsement by Al Gore. All news that is bad is buried -- or if that seems too obvious, it's mentioned briefly, and then killed and buried.

If the network news were devoted to the issues, why would we have an entire story on Barack and Michelle giving each other the fist-bump at victory rallies? Network viewers were treated to "news" like Michelle Obama and her fist-bump appearing on ABC's "The View." If that wasn't enough, then came NBC's entire story on the "frock frenzy" spawned by the dress Michelle Obama wore on "The View." Matt Lauer announced at the show's beginning on June 20 they would get to the bottom of the story of "why women everywhere are dying to get this $148 dress."

If all of that seems like Us magazine, it's because it is Us magazine. Us ran a glowing cover story on the Obamas, noting Michelle shops at Target and is a regular gal -- despite the fact that the Obamas are raking in multiple millions of dollars annually from his eternally best-selling books.

Clearly, as much as voters love to talk about how they care about the issues and they don't like the personal mudslinging, they also seek a leader who's likable or inspiring. For months, the media have labored to build an impenetrable myth around Obama, proclaiming a candidate so idealistic, a campaign so historic that the mere act of placing another name on the ballot is an outrage, as is, apparently, the thought of discussing issues.

Here's another issue-free news story on the "Today" show: On June 26, Matt Lauer giddily announced that Rolling Stone magazine put Barack Obama on the cover for the second time this year. Rolling Stone founder Jann Wenner was channeling the hopes and wishes and dreams of the network news elite: "The tides of history are running strong and fast these days. Ride them, or be crushed. Obama has history on his side, and that's pretty irresistible."

Ride with the media herd -- or be crushed. They ought to wear that motto on campaign buttons.

The most glaring example of a double standard on candidate personalities came from CBS's "The Early Show." On June 18, CBS reporter Jeff Glor tried to list five things we didn't know about Obama, and he oozed that in addition to bicycling and basketball, Obama loves to play Scrabble. But he hates ice cream, since he worked at a Baskin-Robbins as a teenager. CBS co-host Julie Chen declared: "So Rocky Road is like his Kryptonite?"

On June 23, CBS lined up five things you might not know about McCain, and check out the difference in tone. He wasn't born in the United States, but in the Panama Canal Zone. He was nicknamed "the punk" in high school, a reputation that "followed to the Naval Academy," where he graduated fifth from the bottom of his class. When he crashed in Vietnam, it was "It was not his first, it was not his second. It was his third crash as a pilot."

This is the same network that trashed George Bush's record as a pilot, but Dan Rather told John Kerry he should be furious that Bush "in effect" was running a campaign trying "its best to diminish your service in Vietnam."

The one positive thing on the list came next, that his Vietnamese captors called McCain the "crown prince," due to his admiral father, but he declined to accept a trip home before his comrades. Then emerged the final "unknown" nugget: "When he first ran for Congress he was charged with being a carpetbagger."

CBS couldn't muster any of those engrossing details about his taste in board games and desserts, apparently.

It's quite clear that reporters have recovered from their embarrassment at the "Saturday Night Live" skit where the servile, adoring journalists asked Barack Obama if they could get him a pillow. Watching a few minutes of TV suggests they're not only fetching Obama a pillow, but also slippers, cigarettes and a massage therapist. The whole lot of them must be dreadfully impatient that the inauguration (or coronation) is being needlessly delayed by opposition.