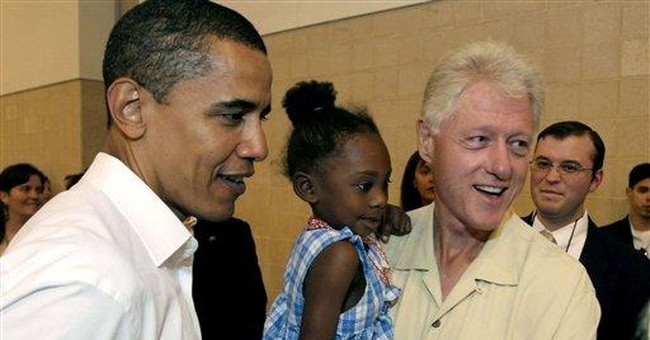 The general election season is under way, and the leftists are already displaying their hypocrisy. They've launched pre-emptive warnings against a Republican "swiftboating" of Barack Obama at the same time they're making up wild allegations about the villainous ultraconservative plots against goodness planned by John McCain. The supposed civility police in the media are emphasizing the Obama warnings of a right-wing onslaught, but not the nasty leftist attacks on McCain. Once again, Republicans are painted as the agents of character assassination, while Democrats are angels whose style is sweet civility and whose substance is the refreshing truth.

Obama's campaign is putting up its dukes with a new website called "Fight the Smears." It's topped by an inspirational quote from Obama's June 3 victory speech. "What you won't hear from this campaign or this party is the kind of politics that uses religion as a wedge or patriotism as a bludgeon." In the words of the Almighty Barack, Team Obama pledges to steer clear of negative personal attacks, and avoid seeing their opponents "not as competitors to challenge, but enemies to demonize. Because we may call ourselves Democrats and Republicans, but we are Americans first. We are always Americans first."

The Democrats and the media are going to take a holiday from demonizing conservatives and Republicans? Ridiculous.

Try this exercise. Sign up for Fight the Smears electronic "Action Wire" alerts, and you receive this message from Obama's fundraisers: "Now take the next step and make a donation to help push back on the petty and divisive methods of our opponents."

So much for not demonizing the opponents.

Already, Obama's army of left-wing slime merchants is up on the television airwaves running ridiculous commercials. Did you see the one from MoveOn.org? It features a quavering blond mommy talking about how her baby makes her heart pitter-patter fiercely, but she's gravely concerned the baby might be going to war. "John McCain, when you say would stay in Iraq for a hundred years, were you counting on Alex? Because if you were, you can't have him."

What a pile of ridiculously inaccurate assumptions. First, we have an all-volunteer military. Second, even if President McCain were elected, he wouldn't serve in office for 18 years so he could make sure all the liberal babies of 2008 are sent to Iraq. USA Today was one of the few media outlets to suggest this ad was a foul ball. The Washington Post declared it "dramatically and personally" illustrated McCain's open-ended approach to Iraq better than Obama had done.

Just as Obama's media allies are silent about the left's hypocritical approach to negative campaigns, so, too, are they silent about nasty left-wing videos on YouTube. Robert Greenwald's "Brave New Films" collective has a commercial suggesting that under John McCain, contraceptives would be banned in America. They call their campaign "The Real McCain."

The ad is set in "President McCain's Women's Health Clinic." When a woman asks the perky blond nurse about her contraceptive options, she's handed a list. When the woman protests it's a blank piece of paper and repeats that she asked about birth-control options, the nurse cheerily replies: "And at the McCain Clinic, you don't have any."

Or take a virulent campaign called "I'm Voting Republican" from a firm accurately called Synthetic Human Pictures. Their Republicans are synthetic caricatures. A male doctor proclaims, "I'm voting Republican because I don't really want a cure for AIDS and breast cancer. They're just gays and women." This video clearly isn't meant to be factual, just vicious. This video has 2.3 million views at YouTube.

Cynical liberals think that the only way Obama can lose is for conservatives to take their well-traveled "low road" with negative ads. They've utterly forgotten -- if they ever acknowledged -- the low road they've traveled with millions of dollars in harsh ads against George W. Bush in the last two election cycles. Negative campaigning doesn't always work. But the media always see negative campaigning as a game only Republicans and conservatives play.