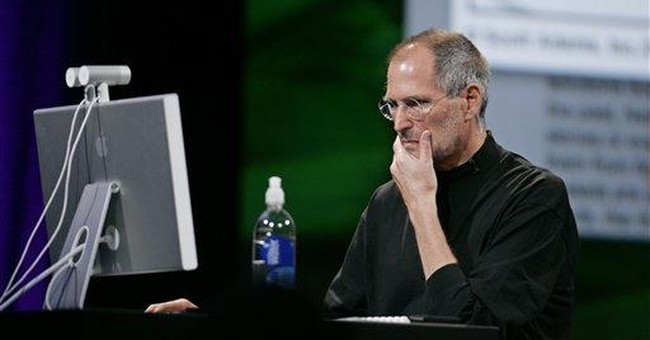 ABC generously offered the Democrats a gift that the Republicans were not given in this electoral cycle -- a two-hour debate, in primetime, on a weeknight. Not only that, it was hosted by former Democratic aide George Stephanopoulos and Charlie Gibson. Left-wing bloggers promptly greeted this gift by smacking ABC in the mouth. Like an abused spouse, ABC responded by repeating all the leftist complaints on its airwaves and supinely saluting the impressive dexterity of the Obama campaign.

Question: What did ABC do wrong? Answer: For once it veered from liberal orthodoxy.

Question: Why did ABC feel the need to atone? Answer: Because it veered from liberal orthodoxy.

The Politico newspaper recently acknowledged the obvious point that the nation's political press is deeply intoxicated at the thought of President Obama, and sometimes needs "detox" after being on the trail with him. But they also noted that the press in this political cycle is more sensitive to the New Media -- the hard-left bloggers from the Huffington Post to Keith Olbermann, who often comes across as either the script reader for Media Matters or the anchor of Daily Kos TV.

These forces once again are proving that the media don't mind being seen as unfair to their reactionary enemies, but are sickened at the thought of being unfair to their progressive friends.

The left has watched conservatives make a national issue of the media's liberal bias, and they see the surveys that show overwhelming national sympathy for this concern. So they decided to get organized and started complaining about how conservative and Republican-enabling the media are -- no matter how ridiculous this argument sounds. Their platform is unequivocal: You can never be enough of a Democratic Party man for the left. You have to prove your loyalty with in-kind contributions in each news cycle.

Seeing the storm of response underlines one obvious fact. Liberals are censorious. They expect the liberal media to dwell only on matters that advance the liberal agenda. Any issue that challenges liberal orthodoxy, or in any way might paint a liberal in a negative light becomes a "phony" issue, and bringing those up is embarrassingly unprofessional. Any hostile question is an egregious naked pyramid of surrender to Republican talking points.

Thus Obama-loving leftists hated the "trivia" and "distractions" that emerged in the debate's first 45 minutes. ABC began by asking the tired question of whether Clinton or Obama would select the other contender as a running mate. They also pressed Hillary on whether she really thinks Obama can win in the fall. But that's not the trivia that offended.

ABC disgusted the Obama-ogling bloggers by dwelling on Obama's developing vulnerabilities. Gibson questioned Obama's remarks about the bitterness of poorer voters to cling to their guns and their religion, and their antipathy to immigrants (instead of voting for liberals). They asked several questions about Obama's longtime minister, the inflammatory Reverend Jeremiah Wright. And they asked if it wasn't a "major vulnerability" that he won't wear a flag pin.

(This last issue is a bit comical, coming from ABC News, whose president, David Westin, banned all ABC News employees from wearing a flag pin on the air so they could remain "independent and objective." Westin also resembled Obama's mysterious sense of patriotism in suggesting he didn't think it was his role to decide whether the Pentagon was a legitimate target for terrorists. The candidate could have proclaimed that he has demonstrated all the patriotism of your average ABC News reporter.)

But the biggest surprise was Stephanopoulos raising the case of "a gentleman named William Ayers," the unrepentant Weather Underground terrorist, who in a poetic lightning strike of bad timing for the left, was quoted on the front page of the New York Times on Sept. 11, 2001, expressing regret, sort of: "I don't regret setting bombs; I feel we didn't do enough." Obama had held an early organizing meeting for his state Senate campaign at the Ayers house, and the Obama campaign had described their relationship as friendly.

Heresy! Olbermann took to the MSNBC airwaves and denounced Stephanopoulos, the closet Republican, for asking this vile question suggested by conservatives. This would have never happened on Olbermann's cockeyed "Countdown" show, since he avoids conservatives as if they'd infect him with scurvy, rickets and dengue fever.

Leftists seem to have a medical approach to public debates. "Republican talking points" are treated like a fatal bacteria and the media are supposed to sterilize all public forums to avoid infection. But as much as the bloggers might intimidate the TV-news stars from uncomfortable anti-Obama stories, they will still be distributed far and wide through the Internet, talk radio and political ads. Ultimately, their horror at any hostile questions to Obama doesn't project much confidence in Obama's ability to withstand the heated kitchens of the presidency.