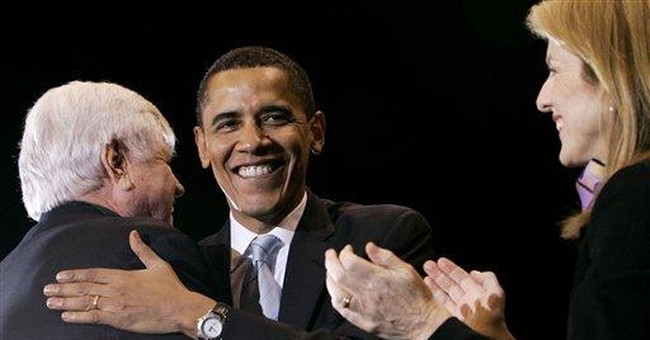 There's one little three-syllable word that has been left out of most of the Democratic primary coverage on the TV: "liberal." We're constantly told by anchors and reporters how the Republican contenders are fighting over the "conservative" vote and who's more "conservative," and that's true. But exactly the same fight is taking place on the left side, with the Clintons trying to suggest Barack Obama's not sufficiently liberal (he praised Ronald Reagan!) and Obama trying to take Hillary's Iraq war vote and turn her into Rumsfeld in a black pantsuit.

But the news media cannot routinely bring themselves to say that word, "liberal." Obama landed a major victory in the who's-more-liberal sweepstakes. He's been endorsed by MoveOn.org, the screechy hard-left group that distinguished itself last year by taking out newspaper ads denouncing our commander in Iraq as "General Betray Us."

Not only did MoveOn.org endorse Obama, but Obama endorsed radioactive MoveOn, in glowing terms. "In just a few years, the members of MoveOn have once again demonstrated that real change comes not from the top-down but from the bottom-up," he declared in a statement. "From their principled opposition to the Iraq War -- a war I also opposed from the start -- to their strong support for a number of progressive causes, MoveOn shows what Americans can achieve when we come together in a grassroots movement for change."

So Obama supports the people who accuse our generals of being traitors to their country. That's "principled opposition." I'm sure this will make him look impressive to his commanders in Iraq if he gets the keys to the Pentagon.

Obama won 70 percent of the MoveOn member vote, and he's also winning 70 percent of the readers' poll at the Daily Kos -- the radical website whose founder Markos Moulitsas declared when four American contractors in Iraq were burned to death and hung from a bridge, "I feel nothing over the death of merceneries [sic] They are there to wage war for profit. Screw them."

You might not have noticed this turn of events. The news media barely did. That's because Obama's hard-left base is one of those uncomfortable facts that ruins the long-standing narrative that Barack Obama is running for national moderator, a centrist deal-maker prepared to manufacture "the audacity of hope" in fizzy two-liter bottles.

At the start of his Senate career in early 2005, Newsweek put Obama on the cover and lauded him as the "incredibly pragmatic" soul of civility who is "uniquely qualified to nudge the country toward the color purple" (merging the red states and blue states). He was all about "embracing our hybrid origins and transcending our often narrow-minded past."

That article did not display the audacity of hope but the audacity of phoniness, claiming something even the interns at Newsweek knew was untrue. Obama's record since then is about as centrist as Trent Lott's. Obama's lifetime American Conservative Union rating is eight percent conservative. Lott's is 92 percent.

Not every endorsement from the ultraliberal side went unnoticed. Obama's endorsement by Ted Kennedy was greeted by the media in ecstatic terms, as passing the torch of "Camelot." So much for the color purple.

As January ended, National Journal magazine reported its finding that Senator Obama was the most liberal politician in the Senate in 2007, 95.5 percent liberal. Both Hillary Clinton and Obama shifted further to the left last year to compete for the left-wing base. Obama's campaign reacted with sheer denial. Spokeswoman Jen Psaki insisted to National Journal that "he's the one candidate who's shown the ability to appeal to Republicans and the ability to appeal to independents."

Apparently, that's all it takes to put a lid on the Obama's-a-liberal talk. Once again, large parts of the "news" media didn't find any news in the National Journal ranking to disturb their bizarre centrist-Obama storyline. Newsweek did notice the ranking briefly -- in an item that touted allegedly "dedicated" Republicans who are switching to Obama, the "Obamacans." Why are the "Obamacans" important? According to reporter Richard Wolffe, "even small numbers of Obamacans can reinforce the candidate's unity message the friendly outreach may blunt the ferocity of GOP attacks."

Yes, especially if those small numbers of pseudo-Republicans are aggressively promoted by Newsweek, which they will be, if Obama's the Democratic nominee. Mark my words.

In every election cycle, the allegedly professional media elite deny the obvious truth before the electorate's eyes: that the Democrats are nominating a doctrinaire liberal. To in any way dissent from this media distortion is, in turn, reported as a "ferocious" partisan attack. It's going to be a long and frustrating year for conservatives. We're not only going to have to weather constant accusations of racism or sexism (or both) for opposing the Democratic nominee, we're going to be described as vicious for simply telling the truth about their ideology.