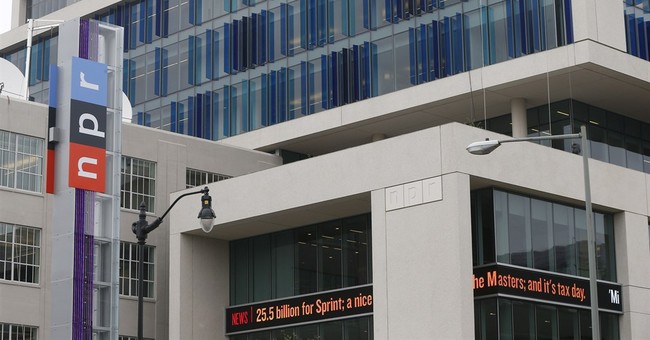 In the fall of 2007, President Bush offered an interview on race relations to National Public Radio correspondent Juan Williams, but NPR declined the invitation. Ellen Weiss, the news boss at the time (who was deposed in the controversy after she fired Williams three years later), demanded that an NPR anchor do the interview. The Williams interview with the president aired on Fox News, and not on NPR.

That sense of feisty independence does not extend to President Obama. When he grants an interview to an NPR anchor, it has all the dramatic tension and hostility of a cappuccino klatch with the D.C. Young Democrats.

NPR "Morning Edition" anchor Steve Inskeep reported the president "seemed unusually relaxed when we pulled up chairs for a 40-minute talk by the Oval Office fireplace." And why not? He knew he would be getting equally "unusually relaxed" questioning.

Inskeep began by noting to Obama that "since your party's defeat in the elections," he'd made two executive actions, one on illegal immigrants and the other normalizing relations with communist Cuba. "Is there some way in which that election just passed has liberated you?"

That sounds like asking Peyton Manning after he lost the last Super Bowl 43 to 8 if he felt "liberated," and perhaps if he was going to Disney World. It's an obnoxious question. Clearly what was called for -- and certainly would have been called for were he a Republican was: "Since the voters have given the Republicans both chambers of Congress, shouldn't you be working with them instead of against them?"

This is par for the NPR course. In 2013, Inskeep asked Obama about Obamacare, that everyone seems to believe "that once the individual mandate takes effect and people begin receiving subsidies, the Affordable Care Act, Obamacare, stays forever. It cannot be removed, because there will be political support for it. Do you believe that?" Obama said yes, and Inskeep added his take on the fallacy of conservatives' opposition: "Apparently the argument is sometimes people come to like things that the government can't afford anymore."

Obamacare stunk it up in the polls then, and still stinks now. At NPR, you never have to notice.

In October of 2012, Inskeep interviewed Obama campaign manager David Axelrod, and in nine minutes of airtime, never asked about Benghazi, but compared Obama to a president on Mount Rushmore: "Abraham Lincoln, as historians have noted, had a habit of getting upset with someone, writing them a letter that might be a very strong letter and then sticking it in a desk -- never sending it. I'm interested if metaphorically, the president has been sticking a lot of letters in the desk?"

Inskeep's new interview was so favorable to Obama that another hard-left network shared in the warm glow. MSNBC played three minutes of clips on "Andrea Mitchell Reports" the day it aired. Mitchell said to Inskeep: "This was not a president, Steve, who is going to be taking another lame duck year or two. He seems to be very activist." Inskeep agreed, saying, "That is his point, Andrea. He wants to present himself as a president who is ready to finish strong." He said Obama decided to "move forward" on Cuba and immigration.

At least MSNBC doesn't rob the wallets of Republican voters and then tongue-bathe the "black Lincoln" on a national broadcast. The new GOP majority ought to zero out the public broadcasting subsidy until they acquire a sliver of journalistic integrity. That day might never come.