Brad Slager
|
Posted: Jan 05, 2022 8:45 PM
Share   Tweet
The opinions expressed by columnists are their own and do not necessarily represent the views of Townhall.com. 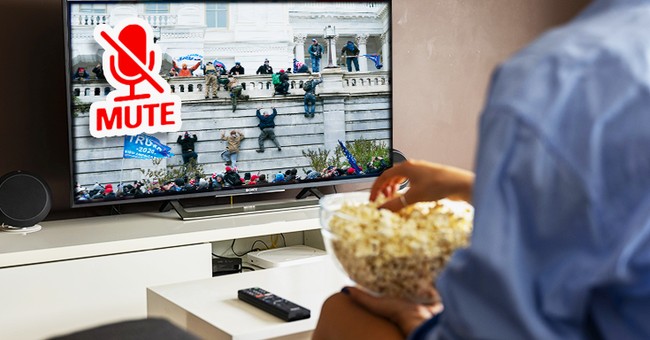 In my daily column covering the press and the numerous means and methods they use to contort the news narratives, I organize their actions with a number of categories. The wealth of content they provide is tough to keep straight at times, but the task is made easier using some tactics the press deplores; namely, recording and research.

There was quite a bit of mayhem from the press last year, so organizing the chaos is a task, but one made easier by a basic motivator – it is rather enjoyable scorching their smug attitudes. So to display the various ways the journalists and news outlets committed media malpractice throughout 2021, we will award the worst performances seen from the "Riffed from the Headlines" column this past year. The nadir of the industry follows…

BOTH KINDS OF STANDARDS – When the press makes a declaration, it is usually in conflict with a previous declaration made in the press. Here are a few of the top contradictions seen last year.

- CNBC gave a helpful listing of what they deemed the Best and Worst States in which to live. It is unclear how it weighted the criteria, but it certainly was not based on what people chose for themselves. Five of their "worst" choices experienced the highest population growth, while their Top-10 featured nine states at the bottom.

- The press fell in adoration with Rep. Liz Cheney last year as a result of her anti-Trump stance. It got her removed from GOP leadership, but NBC's Savannah Guthrie got to the bottom of why. It was not because Cheney stopped doing her job as a leader in the party, it was due to Republican sexism. Of course, this is defied by the fact that she had initially been placed in a leadership role and also by the fact that her replacement was Rep. Elise Stefanik.

- Not to suggest that the couture experts at Vogue magazine are biased, but the August issue featured a sprawling bio and gallery spread of First Lady Jill Biden, as well as a feature on Press Secretary Jen Psaki. Notable is that Vogue never sent Annie Leibovitz to the White House during the Trump administration, despite Melania's past as a fashion model.

- Vox took a look at the practice of state legislators from Texas leaving town in order to prevent a vote on a new law from taking place and made a determination – the GOP is to blame. The Texas Dems enacting their doomed Flee-ibuster was said to be the fault of the Republicans; this counters their previous stance of GOP lawmakers in Oregon pulling the same stunt…and also being the fault of Republicans.

- WINNER: Alexandria Ocasio Cortez at The Met Gala – Alex From The Bronx turned heads and stomachs when she twirled in her infamous "Tax The Rich" ball gown. She claimed it was chosen to highlight indigenous designers, except this contradicted the event theme of "In America," as the designer is from Canada. Also, she is known to be in a relationship with the billionaire scion of the Seagrams fortune, but hey, it was done for the little people.

DOUBLE CHECKING THE FACT-CHECKERS - It is notable how frequently the facts are erroneously reported by the people whose solitary job it is to get the facts correct.

- When Pete Buttigieg made mention of city designers making bridges too low to keep buses from bringing minorities to the white beaches, WaPo's Glenn Kessler defended him by noting the book it was based upon. He called it "One of the best non-fiction books ever written," then changed his opinion two days later once the fact-checker learned the book is largely disputed.

- Following the riot on January 6, the perpetual center of attention, Rep. Alexandria Ocasio-Cortez, said she had been in peril. Then many people noted she had not even been in the building at the time. Snopes rode to her rescue, declaring it a bad faith argument to make, calling it Mostly False – despite the fact that she was in an entirely different building.

- The Associated Press called it a false story that the National School Board Association was labeling parents opposing Critical Race Theory at meeting as terrorists. This, despite the evidence of an NSBA letter asking for President Biden to invoke the Patriot Act and a number of other enforcements to battle back the opposition.

- In his CNN town hall appearance, Joe Biden declared he had visited our Southern border, a claim that was a surprise to just about everyone – except the truth detectors in the press. They decided that he was technically correct due to a 2008 motorcade drive-by he made while campaigning that year.

- WINNER: Snopes – One of the co-founders had to be let go, and dozens of his entries were scrubbed once it was learned that the fact-checker had, in fact, plagiarized many of his entries.

BODY CHECKING THE FACT CHECKERS - These are some of the vital details these viscounts of vérité were busy debunking while avoiding pertinent news worth looking into.

- The Heinz company has NOT created an Oreo-flavored mayonnaise.

- The cardboard beds at the Tokyo Olympics were NOT designed to prevent sex to stop Covid transmission.

- A church has NOT, in fact, been granted a liquor license.

CORRECTIONS OF THE YEAR - While the likes of Brian Stelter pretend that Fox News is the sole outlet dispensing inaccurate information, here are the stories with some of the most notable corrections after publication.

- National Public Radio last year drew attention when they boldly stated that they would not cover the Hunter Biden laptop story, decreeing it would be a waste of time for their readers. The outlet issued a correction, now stating that the story had not, in fact, been proven false. They buried this disclaimer at the bottom of a book review... of Hunter Biden's memoir.

- The Atlanta Journal-Constitution corrected some of their coverage of the Georgia election law. They did so after the paper in the state capital saw the fact-check on the law in The Washington Post, and included it in a profile article on celebrity Tyler Perry.

- The New York Times mistakenly ran a test page on their main site. This meant that the paper of record had to retract their "report" of Fields of Watermelons Found On Mars.

- With screaming over Covid misinformation being all the rage, you might think news outlets would be extra diligent on the subject. The Texas Tribune announced that nearly 6,000 children had contracted the virus over the past week, only to later correct the record that it was, in fact, the total from the entire pandemic.

- WINNER: CNN – In a lengthy piece on the second Donald Trump impeachment, four reporters lent a lengthy rundown on what some of the members of Congress experienced during the January 6 riot on the Capitol. At the end was this gem of a clarification:

"CORRECTION: A previous version of this story misstated that Rep. Ted Lieu grabbed a crowbar before leaving his office. He grabbed a ProBar energy bar."