Brad Slager
|
Posted: Mar 04, 2021 11:56 AM
Share   Tweet
The opinions expressed by columnists are their own and do not necessarily represent the views of Townhall.com. 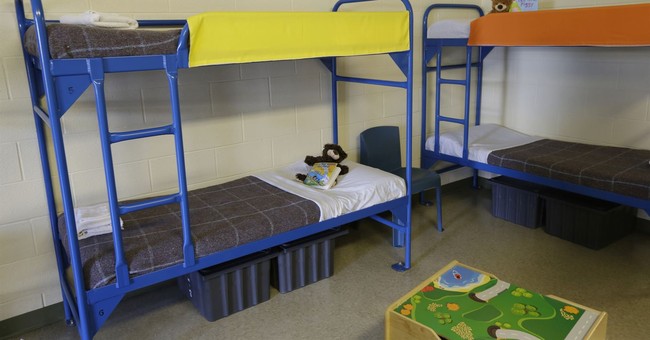 During the Democratic presidential primaries one debate was held in Miami, Florida. In the days leading to that liberal hoedown numerous candidates, including the hopeful Kamala Harris, rushed to Homestead, Florida, to stage photo-op press conferences outside a building. The location was a holding facility for underage immigrants, and each of the candidates wailed about the harsh conditions inside which none of them had seen firsthand. Though it was closed later that same year, today, Joe Biden is readying for that same building to reopen

You would think that for all the bleating from the left and the media (yes, yes - I know) about how grave the matter is concerning minors who have crossed the border into our country that the last thing those complaining would do is politicize the issue. For years we have been forcibly injection-fed the concept of a moral crisis having been enacted by President Trump regarding young nomads coming to the U.S., yet those clamoring to solve the problem are instead playing political games.

The main problem for the scolds in the press is that they have created this problem for themselves. After declaring that Trump was involved in a humanitarian crisis by placing children in what they melodramatically called concentration camps, their new chosen leader is seeing his hand forced to do the same thing. The arrival of the permissive Joe Biden has led to the arrival of a wave of newcomers at the Mexican border, and as a result suddenly their sainted savior is being forced to engage in the very behavior that has been declared something bordering on genocide.

This has led to those screeching harridans in the media to face some harsh realities that they find impossible to reconcile. The layers of paradox are so thick no one is capable of making sense. They cursed Trump’s border policy, but Joe flinging the doors open has led to the need to behave in ways they have condemned. If there is now a required need to house these new arrivals that means that Trump’s actions were also needed, or that his clamping down on the border, which they also shrieked about, was a way to prevent the humanitarian problems. And if Uncle Joe is using the very same facilities that Trump had used then either Trump was not so despotic and these buildings not so horrific, or Biden has to be labeled as just as demonic as his predecessor.

You can sense the pain the journalists are enduring right now.

Biden has already reopened one of these accursed adolescent Super Max locations in Texas, and he is poised now to do the same in South Florida. This has led to problems in reporting, the implementation of euphemisms to cover the conflicts of interest, and the fumbling of explanations. The administration was pained in describing the dividers used in these locations, going far to describe that the temporary walls were not in fact cages. What we are seeing taking place is the recalibration of the truth. You would think that with an issue deemed so severe that the facts would take priority, but instead wallpapering and whitewashing are the order of the day. Burnishing Joe’s image takes priority over the children is the lesson.

What is lost in the accusations and the twisting of new developments to avoid casting Joe in a negative light are the facts. The South Florida holding facility is something that has been a political tool, but ever since I had covered this facility in the past there has been little interest in the details of what was inside; spinning things for political gain has been the rule. Just look at how they are recasting things for the sake of the current administration. During Trump’s term this had been named The Homestead Detention Center but today it has been recast, to the more genteel Biscayne Influx Care Facility. Oh please…

In the summer of 2018, the outrage over Trump’s immigration policy was in full flame, and the charges that the president caging children was all the rage. The reality that the images displayed were from the bygone Obama era only interrupted the narrative briefly. Florida politicians Senator Bill Nelson and Representative Debbie Wasserman Schultz were surprised to learn the second largest underage holding facility in the country was in Homestead, and they stormed down in full-throated outrage.

While implying Trump was sneaking this facility operation right under their nose, they revealed their own political incompetence. The building had been opened during the Obama days, and the governor’s office had in fact notified the offices of all congressional politicians of the opening half a year earlier. This obliviousness was further exposed when days later their contingent, and a smattering of press, were permitted to tour the facility.

Patricia Mezzei of The New York Times was one of those reporters allowed in. They did not find children caged and sleeping under threadbare tarps on the floors. She detailed the kids stayed in dormitory housing, and were given beds, clothing, and toiletries. There was a structured schedule, cafeterias feeding them, and other activities were provided before their average one month stay. The harshest condition was some kids needing sweaters, because they were not accustomed to central air conditioning.

The hysterical stories of prison camp-level conditions died off within a day and were not heard of again. But now the news of Biden reopening this location has some activists in outrage mode. One recently wrote about the closing of the former “detention camp,” and invoked the tired trope of kids ripped from the arms of parents in order to fling them into jail-like conditions. This is a longstanding lie. At one time the Homestead facility held nearly 1,200 children, and of that total over 95 percent were being housed because they arrived here without their parents.

This is also another reality being seen today. NBC News affirms that as of last week the U.S. is currently holding over 7,000 of these youths. They are unaccompanied minors, so there is a need to have the appropriate facilities to house them. What those shrieking over the “jailing” of kids never offer is the better alternative. Should the kids be turned loose, or given over to unverified guardians? NBC recounted the story of past efforts giving the kids up to sponsors and finding out they ended up as farming migrant workers. (That was in 2014, mind you.)

All of this means that Joe Biden is facing almost all of the same issues that Donald Trump had to contend with, and the reason is that he had brought this on himself. His permissive stance with the border leads to the very challenge the prior administration faced. Now the press is tasked with spinning the reality.

The story of kids torn from their parents cannot hold up when Biden is collecting kids by the thousands today. In order to protect Joe, now the messaging is erasing the horrors accused of the Trump administration. Biden is either using buildings from Trump, making them less the horror chambers as reported, or they were Obama-era facilities and therefore the accusations over Trump’s use were all lies.

Justifying the exact same policies today is a monumental task for the reporters. They will be straining to declare these decisions are magnificently heartfelt when they had called them morally repugnant acts just years ago. The biggest challenge in the press right now is figuring out how to report on Joe’s internment of youths without exposing themselves as the lying hacks they have been. You can almost feel sympathy for their plight. Almost.