Hey, Democrats: If not ObamaCare, Here's $95 billion of Easy Savings 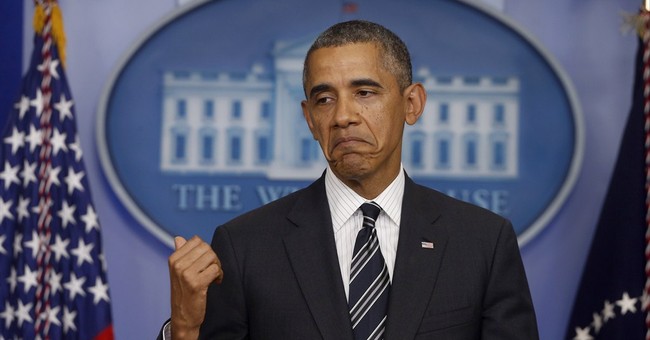 As Washington wrestles with the challenge of keeping the government's lights on and paying the bills, the Democrats have hunkered down in their familiar "no more spending cuts" position.

The House Minority Leader Nancy Pelosi says, "We all want to reduce the deficit." However, "There's no more cuts to make," she says. "The cupboard is bare." Harry Reid accuses thrift-minded Republicans of extortion, and calls them anarchists, arsonists, and extremists. The President has no time for Congressional Republicans. "I will not negotiate," with elected representatives of the people, he says. Obama's chief adviser likened Republicans to terrorists with "a bomb strapped to their chests." Meanwhile, the President is perfectly willing to extend an olive branch to Iran and sub-contract management of U.S. foreign policy to Vladimir Putin.

Most Americans understand that the federal government's cupboard is definitely not bare – more like stuffed with waste. The folks back home also noticed that the Armageddon that the Democrats warned would occur with the sequester cuts instead resulted in barely a ripple. While there may be disagreement on the "how," Americans by 2-to-1 want the politicians to work toward compromises to solve our problems according to a Gallup survey.

Virtually everyone understands that the government needs to be put on a diet; but since they can't come together on solutions, the politicians keep feeding the beast. The Democrats idea of "compromise" is to "agree to more spending today in exchange for a promise to talk about spending cuts tomorrow." But, tomorrow never comes.

Led by Ted Cruz, Mike Lee, and House conservatives, the GOP's recent fight has focused on defunding or delaying ObamaCare. A spattering of Democrats agree that ObamaCare is going to be a train wreck and should at a minimum be delayed. But, for Democrats who supported and passed the behemoth legislation, that would amount to eating crow – and, no one on Capitol Hill finds crow very appetizing.

Pride is a powerful vice, particularly for politicians. If the Democrats aren't willing to swallow their pride and tackle the big targets like ObamaCare, there is an abundance of smaller, obvious ones available.

One list of possibilities is probably sitting unread in the in-basket on their desk. It's a report from earlier this year from the GAO (Government Accountability Office) recommending "Actions Needed to Reduce Fragmentation, Overlap, and Duplication." The GAO identified more than $95 billion of savings that could be realized just by addressing the duplications and government inefficiencies in this report. Here are the opening paragraphs of the report to Congress:

This 2013 annual report identifies 31 areas where agencies may be able to achieve greater efficiency or effectiveness. Within these 31 areas, we include 17 areas of fragmentation, overlap, or duplication where multiple programs and activities may be creating inefficiencies. Although it may be appropriate for multiple agencies or entities to be involved in the same programmatic or policy area due to the nature or magnitude of the federal effort. The report also includes 14 areas where opportunities exist to achieve cost savings or enhance revenue collections.

To address the issues identified in these areas, we suggest 81 actions that the executive branch or Congress could take to reduce or eliminate fragmentation, overlap, or duplication or to achieve other financial benefits. Given that the areas identified extend across the government and that we found a range of conditions among these areas, we suggest a similarly wide range of actions for the executive branch and Congress to consider. For example, the actions we suggest in the report include, among many others, canceling a demonstration program, strengthening oversight of certain payments and investments, and limiting or reducing subsidies for a particular program.

Congress and the White House don't even have to do any work. The GAO already did it for them. And, these are not ruthless slash-and-burn cuts; they are primarily examples of multiple agencies and programs funded to do exactly the same thing. It's waste that no one would tolerate in the real world outside of the federal government.

If the Democrats can't swallow their pride and admit ObamaCare is not ready for prime time, then at least don't play the rest of us for fools and pretend government is so finely tuned and efficient that there are "no more cuts to make."

Following are some of the headline examples from the GAO report. Again, the savings from the GAO's recommendation exceed $95 billion – that's $95,000 million! Real money – at least everywhere outside of Washington.

Examples from the 2013 Duplication Report