Bob Beauprez
|
Posted: Dec 19, 2012 12:01 AM
Share   Tweet
Trending
"Uncertainty in the private sector over taxes and government policy clearly is having an impact on business' ability to invest in the United States. Business investment is lagging – bad news for growth next year."

–Steve Forbes, December 13, 2012, The Washington Times
Small business accounts for half of all the private sector jobs in America, but over the last two decades has created 2 of every 3 new jobs according to the SBA. Small businesses are a font of invention producing 16.5 times more patents per employee than large corporations. Being nimble in the market place, small businesses make up 97.5 percent of all identified U.S. exporters and produce nearly one-third of all export value for our economy.

In America, small business is a big deal.

President Obama was right when he said that "small businesses are the backbone of our economy," but his words are hollow. Entrepreneurs feel more like Obama's economic policies are breaking their back.

Strike One: Gallup and Wells-Fargo released the results of their Small Business Index Survey and found "net capital spending intentions for the next 12 months plunged to -14 in November, the lowest level in more than two years." Dennis Jacobe, Chief Economist at Gallup, says this "suggests the nation's small-business owners are likely to pull back on their business investments even more, given their negative expectations for the next 12 months."

Jacobe said the survey found small business owners "the most pessimistic they have been since the third quarter of 2010." Why wouldn't they be? The full impact of ObamaCare is about to kick in, and if the President gets his big tax rate increase 24% of the high-income earners - or 923,000 of them – will be small business owners according to U.S. Treasury Department economists.

The following graph documenting more than nine years clearly displays the increasing pessimism of which Jacobe speaks including a pronounced downward trend over the last year.

Strike Two: The Institute for Supply Management has been tracking the manufacturing economy for 50 years issuing continually updated information. Since many manufacturers are small business owners, it is not surprising that ISM's newly released report was not encouraging. The Purchasing Managers Index (PMI) "registered 49.5 percent, a decrease of 2.2 percentage points from October's reading of 51.7 percent, indicating contraction in manufacturing for the fourth time in the last six months...the lowest level since July 2009 when the PMI registered 49.2 percent." As the following chart indicates, the PMI has been trending sharply downward for two years. 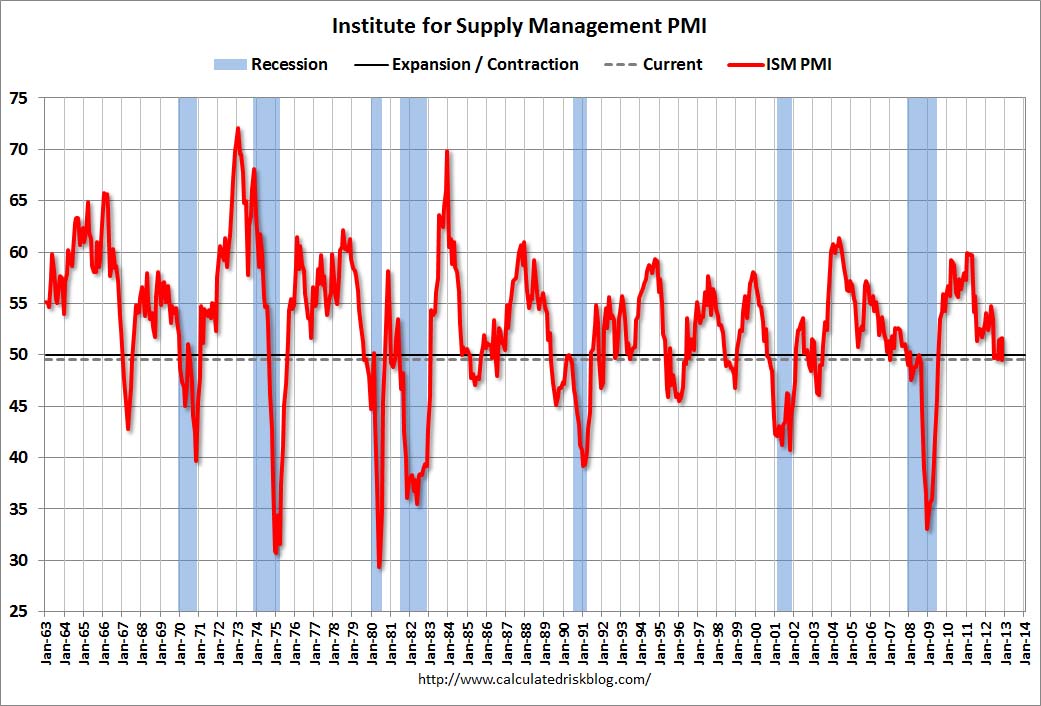 Click here to view full size
Also foreboding was ISM's Employment Index that trended sharply downward after several months of modest encouragement. "ISM's Employment Index registered 48.4 in November, which is 3.7 percentage points lower than the 52.1 percent reported in October, and the lowest reading since September 2009," according to the newly released data.

Strike Three: The National Federation of Independent Business, NFIB, has been tracking small business owner optimism for 26 years. With the exception of during the bottom of the last recession, the November index is the "lowest optimism reading in survey history," according to the December 11, 2012 report.

As the chart below indicates, small business optimism plunged 5.6 points in the month of November. "The two major events in November were the national elections and Hurricane Sandy, which devastated parts of the East Coast. To disentangle these, the results for the states impacted by Sandy were excluded from the computation for comparison," according to a NFIB press release. However, after separating the hurricane-impacted states from the remainder, NFIB found that the data indicated that the election was the primary cause of the decline in small business owner optimism.

"Something bad happened in November – and based on the NFIB survey data, it wasn't merely Hurricane Sandy. The storm had a significant impact on the economy, no doubt, but it is very clear that a stunning number of owners who expect worse business conditions in six months had far more to do with the decline in small-business confidence," said NFIB chief economist, Bill Dunkleberg.

"Nearly half of owners are now certain that things will be worse next year than they are now. Washington does not have the needs of small business in mind," asserted Dunkleberg. "Between the looming 'fiscal cliff,' the promise of higher healthcare costs and the endless onslaught of new regulations, owners have found themselves in a state of pessimism. We are forced to ask: is this the new normal?"

For more than three years Barack Obama has claimed that the economy "is headed in the right direction." Unfortunately, his claim is based more on wishful thinking than on fact. The problems used to be all George W. Bush's fault. More recently, though, he's targeted John Boehner and the Republicans on Capitol Hill. Obama would have us believe that if only the GOP lawmakers would agree to his $1.6 trillion tax increase plan and yet another spending stimulus, surely happy days would be here again.

Last week I wrote about the continuing trend of dismal Labor Department jobs reports. Three and a half years into a supposed recovery, job growth is barely sufficient to keep pace with population increases. The percentage of the workforce even looking for a job is at historic low levels. In November twice as many people walked away from the work force as the number of new jobs created. That's hardly an indication of a real economic recovery.

Perhaps feeling a little ignored in recent weeks as all eyes are on Capitol Hill and the fiscal cliff negotiations, Federal Reserve Chairman Ben Bernanke announced that next year the Fed will more than double the printing of new money to "buy $45 billion in Treasurys (debt) each month, in addition to the $40 billion in mortgage-backed securities it purchases each month."

Bernanke's announced plan means the Fed will flood the market with $1.02 trillion in 2013. That will be on top of the more than $2 trillion in assets already purchased by the Fed since the recession began.

So, one year hence, the Fed's balance sheet will have swollen 440% in just five years. "The Fed has to hope the economy gets health soon, and that Washington, fiscally speaking, gets religion. Then it can push interest rates and its balance sheet back to a normal range without a crisis," opined the editors at Investor's Business Daily. "But if these good things don't happen, the U.S. could be headed over a monetary cliff – hyperinflation or a brutal hike in interest rates – that makes the present 'fiscal cliff' look tame in comparison."

The number of realists who are betting that both the "economy gets healthy soon" and this government gets spending under control is a tiny group, indeed.

None of these ominous threats are lost on the people trying to figure out how to survive and assess future risks in the real world. After several trillion dollars of stimulation by the Obama Administration and the Fed, one might think the economy would be chugging along at a pretty good clip. But, it just isn't so, and the light at the end of the tunnel is pretty dim. Just ask a small business owner.
Can We Talk About How John Fetterman Can’t String a Sentence Together?
Matt Vespa
Garland's Approval Rating Plummets
Katie Pavlich

Adam Kinzinger Weighs in on His Pal Liz Cheney’s Loss