Republican Votes to Punish Rep. Marjorie Taylor Greene Does Not Bode Well for the GOP

Bob Barr
|
Posted: Feb 10, 2021 12:01 AM
Share   Tweet
The opinions expressed by columnists are their own and do not necessarily represent the views of Townhall.com. 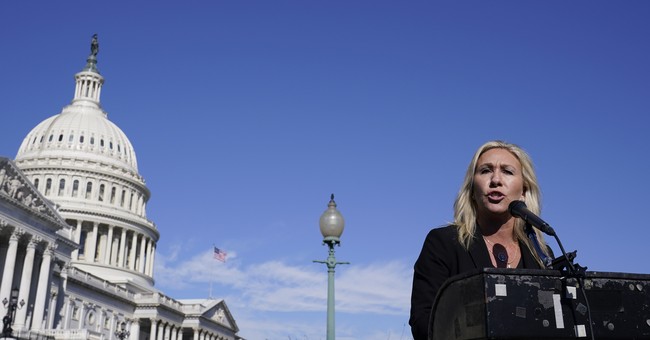 More consequential than 10 Republican House members voting last month to impeach former President Trump, was this month’s vote by 11 GOP members to strip their colleague, Georgia Rep. Marjorie Taylor Greene, of her committee assignments. The freshman member had been targeted by Speaker Pelosi and the Democrat majority because she had – before her election last November – engaged in social media communications that ran afoul of today’s political orthodoxy. The fact that 11 GOP members voted with the Democrats and against a Republican, reveals serious leadership, unity, and discipline problems within GOP ranks.

But first, to the impeachment vote. Many Republicans understandably were upset that 10 GOP House members broke ranks and voted to impeach Trump during his final days in office. Wyoming Rep. Liz Cheney was singled out for especially harsh rebuke because she occupies one of the top leadership positions in her Party’s caucus.

If one considers what happened on January 6th not objectively, but in the light most adverse to the former President, one could construct an argument that something he said or did provoked the violence that occurred on Capitol Hill that day. It boils down to questions of opinion, bias, and perspective. As is their prerogative, 10 Republicans decided to adopt this view and vote for impeachment, a decision for which they will have to answer to their constituents.

On the other hand, the highly unusual vote by the full House on February 4th stripping Ms. Greene of her new committee assignments, had nothing to do with evidence, ethics, competence, or legalities. The vote was simply a move by the Democrat majority to punish a new GOP member. There was no evidence or even an allegation that she had done anything unethical or unlawful; simply that in the past she had crossed the line from political correctness to communications deemed verboten by the new cancel culture, including “retweets” of other people’s messaging about controversial and later debunked theories.

If in fact there was punishment to be meted out as a result of Greene’s earlier social messaging, such action would fall to the leadership of her party, the House Republican leadership. And if her party deemed her transgressions to be sufficiently egregious to take the highly unusual (but not unprecedented) step of removing her from her committee assignments, it would be her party’s members who would vote to do so. However, after meeting with the House Republican leadership, no reason was found to merit such drastic measures.

That should have been the end of the matter.

Congressional Democrats, constantly on the prowl for pounds of flesh to extract from anyone holding views similar to or in support of Trump, decided they would do what Greene’s own party did not, and she was removed from her assigned committee by majority vote of the full House. No Republican should have voted for that resolution; crossing over to vote with Pelosi strengthened the Democrats’ hand even as it weakened the GOP’s.

There are 435 members of the U.S. House of Representatives, and each one belongs to either the Republican or Democrat Party. Each House member was elected with the support and benefit of the party they chose, and each one owes that party their support if and when it is challenged by the opposing party.

This does not mean that a member owes the party their vote if doing so runs contrary to their conscience or the best interests of their constituents. But for Republican House members, this does mean they support their party when it is being attacked by the Democrats who, in this instance, are overstepping the bounds of intra-party administration and responsibility.

The 11 Republicans who sided with Pelosi and against their own party in punishing Rep. Greene should have been taken behind the woodshed by the GOP leadership and reminded in no uncertain terms that loyalty matters and that it cuts both ways. The fact that this apparently did not happen strongly suggests a serious lack of leadership and discipline within the Republican Party. It portends more problems for Republicans in the months to come, as Democrats look for ways to widen these fissures in the GOP ranks.