Bob Barr
|
Posted: Jul 10, 2019 12:01 AM
Share   Tweet
The opinions expressed by columnists are their own and do not necessarily represent the views of Townhall.com. 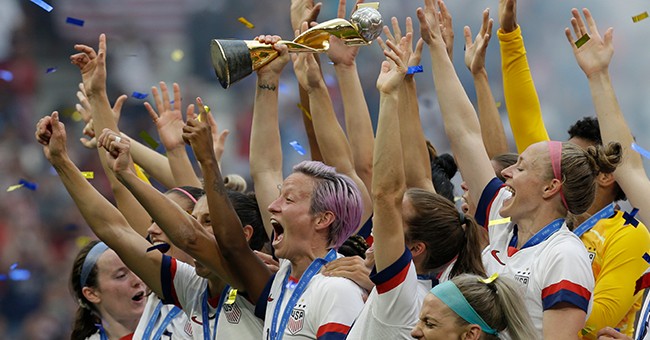 Most parents know negotiations with toddlers are less an artful debate than a war of attrition. Toddlers make their demands, and failing to immediately get their way, throw a tantrum until the parent either relents or punishment ensues. This, of course, is reflective of basic childhood development; their reasoning skills have not had a chance to mature, and the tantrum tactic is all they know. Parents face similar circumstances several years later with teenagers coping with raging hormones.

In this still new 21st Century, our country faces a new challenge – confronting an emerging breed of adult whiners who are simply raging.

Over the last month, the United States women's national soccer team battled through the FIFA World Cup to triumph over the Netherlands last Sunday. Largely overshadowing this impressive athletic victory, however, was the team’s disgraceful conduct off the field; most notably that of its co-captain, Megan Rapinoe.

Rapinoe first ignited a national firestorm by stating publicly and gratuitously early in the tournament that she was “not going to the f***ing White House” if the team won the World Cup. Rapinoe tossed more fuel on the fire when, after the team’s final victory, she pointedly dropped and stepped onto the American flag rather than hold it aloft as has become the custom for victors in such international tournaments.

By pushing herself into the limelight on the World Cup stage, Rapinoe has become the newest anti-Trump hero in a movement always on the prowl for new champions.

Far from achieving notoriety based on activities or ideas of substance, Rapinoe joins a growing list of egomaniacal celebrities who consider a moment in the national (or international) spotlight simply an opportunity to “virtue signal” their hatred for Republicans generally, and President Trump in particular.

Whether it is Olympic ice skater Adam Rippon’s needlessly antagonistic comments about Vice President Mike Pence, or the MVP of Whining, Colin Kaepernick, declaring “hurtful” a Nike tennis shoe depicting the Betsy Ross American flag, the new breed of whiners has overtaken much of professional sports. Lost in their fits of rage, of course, is any real opportunity to accomplish that which their words and antics purport to seek.

Refusing an opportunity to meet with the President of the United States, for example, even as one member of a championship team, closes off a unique opportunity to have a substantive impact for their cause (whatever that might be).   This President, more so than his predecessors, has shown himself open to listening to other viewpoints and changing his views on issues, if approached respectfully rather than with profanity and name-calling.  Rapinoe could take a lesson from Kim Kardashian in this regard.

Kardashian certainly is not a Trump supporter, but she wisely has engaged the White House on criminal justice reform multiple times in recent years. The result of her work with the White House not only secured the release of Alice Marie Johnson, a grandmother serving a life sentence for a non-violent drug offense, but provided momentum for the “First Step Act,” a major criminal justice reform package signed earlier this year by Trump– a goal denied to President Obama even when he enjoyed a Democrat-controlled Congress.

These whiners find delight in feeding the toxic environment infecting today’s politics; in which liberals prefer to throw “f-bombs” and milkshakes at political opponents (or worse), or have them censored on social media, rather than engage them in thoughtful debate. Unfortunately, we cannot even expect better than the behavior exhibited by Rapinoe from most elected Democrats, who as a group have come to realize this boorish behavior plays well to their followers on social media; even if it means further alienating their colleagues on both sides of the aisle, and thereby making any substantive progress virtually impossible to achieve.

How much will Rapinoe accomplish for gay rights, or equal pay for women, by refusing to meet with the President in favor of taking snarky shots at him on Twitter or in other venues?  In the end, she and others like her really don’t care; to them, the goal is the delivery of the message, not the result.