Bob Barr
|
Posted: Jul 04, 2018 12:01 AM
Share   Tweet
The opinions expressed by columnists are their own and do not necessarily represent the views of Townhall.com. 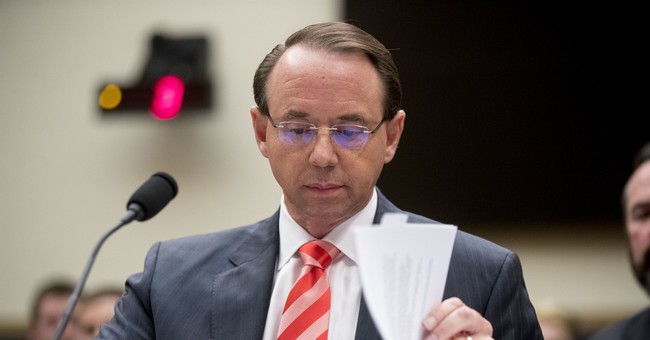 Last week’s House Judiciary Committee hearing - during which Deputy Attorney General Rod Rosenstein and FBI Director Chris Wray were grilled for some four hours - delivered to the American people what has become standard fare for modern-day congressional hearings.  There was fire and fury, extreme indignation, raised voices exhibiting anger for the cameras, and a few cuss words thrown in to up the chances those soundbites made it onto the evening’s talking heads programs.  All this was followed by...silence.

As the party in power, and reflecting the primary focus of the hearing, the Republican inquisitors railed – legitimately - against the failure by the Justice Department to produce records previously subpoenaed.  The two witnesses stood their ground, defended their turf as anticipated, and exhibited the requisite degree of indignation when called for.

And what did the Republicans get for all the fire and fury?  Thus far, apparently nothing.  But this has become standard fare for the kabuki into which modern congressional oversight has transmogrified.  It’s become achingly predictable – a committee ask for documents, which the administration either refuses to provide or does so only partially and after much delay, the Committee then shakes its fist, subpoenas the materials, holds a hearing, and then...each side goes back to its corner and the matter is largely forgotten or overtaken by other events; or the process starts over again.

Savvy administration witnesses called to the mat at a congressional hearing know that if they show up, withstand a few hours of pressure as Members use their time (in five-minute chunks) to deliver their carefully crafted soundbites (“Whatever you got, finish it the hell up…”), the witness can then wipe their brow and return to their office, secure in the knowledge there will be little, if any, real follow up action taken by the committee or its members (beyond an occasional letter).

To this scenario can former Director of National Intelligence James Clapper attest. In other words, even a bald-faced, on-the-record lie to a congressional committee results in nothing more than an occasional critical op-ed.

Congressional inquisitors shout. Witnesses squirm. Talking heads argue.  Everyone goes back to work.The nation moves on.  No answers.  No resolution.  No finality.

It needn’t be that way.  There actually are tools available to the Congress with which the body could force the Executive Branch to be actually and legally responsive to the Congress; if, that is, the Congress cared to use those tools. That is a big, big “if,” and it implies that Members Congress actually understand the tools and have the commitment (read, “backbone”) to use them.

For starters, Congress could use its appropriations power to pass a bill prohibiting the Department of Justice, or a component thereof (say, the Office of the Deputy Attorney General or the Office of the Special Counsel), from expending any further money until that office has taken steps (to the satisfaction of the Congress) to comply with what the Congress had sought.  In the case at hand, this would include documents subpoenaed that establish the particulars – all the particulars - of how and why certain FISA warrants were obtained and employed to surreptitiously surveil certain individuals in the context of “collusion” with Russia. It is highly unlikely President Trump would not sign such a measure.

That’s just one quick example of how the House could use its power to appropriate monies - a power afforded it explicitly in Article One of the Constitution - to obtain materials it has determined are necessary for the Congress to carry out its oversight responsibility.

Another arrow in the congressional quiver – rusty, but lawful nonetheless – is the power to hold in contempt, arrest and detain a witness who fails to produce subpoenaed materials. This power was employed by a congressional committee and then tested by a recalcitrant witness in the late 1920s “Teapot Dome” scandal.  It was deemed a legitimate exercise of congressional oversight power by no less an authority than the Supreme Court of the United States in a 1927 decision (McGrain v. Daugherty) that has never been overturned.

Sure, these are strong measures; and neither should be exercised lightly.  But unless the Congress is willing to use lawful tools already at its disposal with which to force an obstinate administration to comply with lawful demands by a co-equal branch of our government, the House should stop all the theatrics and histrionics, and meekly roll over while yet another bureaucracy runs roughshod over it.