Bob Barr
|
Posted: Apr 18, 2018 12:01 AM
Share   Tweet
The opinions expressed by columnists are their own and do not necessarily represent the views of Townhall.com. 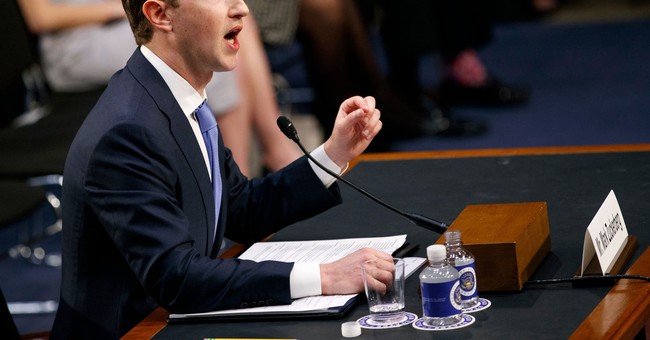 If there was ever a time to revive the term “low energy” -- President Donald Trump’s devastating 2016 epithet for Jeb Bush -- it would be to describe Congress’ lethargic performance during last week’s hearings on consumer privacy and Facebook, featuring social media wunderkind Mark Zuckerberg.

Rather than the hard-hitting grilling of Facebook’s founder and CEO that many had hoped to see, members of the congressional committees conducting the hearings exhibited instead the stereotypical, maladroit grandparents hopelessly lost as the grandson tries to explain the basics of electronic media.

Facebook is the world’s largest social media platform, with more than a billion active users. Having its CEO not only present, but willing to answer questions from members of Congress regarding consumer privacy, was a historic opportunity. And, for a brief moment before the questioning began, it appeared a potentially watershed moment might be at hand for cooperation between Silicon Valley and Washington, D.C., to substantively address privacy in the Age of Social Media.

Instead, Zuckerberg was able to answer only the questions he wanted, often with waffling answers that ducked accountability and deflected anything that really went to the heart of the data issues; all with barely any truly meaningful cross-examination from Senators or Representatives. Answers couched in phrases such as, “we do not generally . . . ” or “I’m not specifically aware of . . ., ”  allowed Zuckerberg to parry the bumbling probes of members, some of whom either clearly did not understand the basics of electronic media, or had other points to make during their allotted time.

Zuckerberg is brilliant, wealthy and poised; characteristics manifest in his calm demeanor and consistency during the two days of questioning. The real gulf between Zuckerberg and members of Congress, however, was not his age, wealth or IQ. The most glaring difference between the witness and the questioners was preparation. Unlike Zuckerberg, who was by all appearances ready for the cross-examination that presumably awaited him, the congressional inquisitors did what members of the Congress most often do – just show up for the cameras and the voters back home. The result was Zuckerberg running circles around the nation’s supposed policy brain trust.

The lack of attention paid by the Congress to one of that institution’s most important responsibilities – oversight of the nation’s laws, regulations and expenditures -- is a problem about which I have spoken often and which was on distressing display during the Facebook hearings last week.

Most members of Congress will trip over themselves to convene hearings in response to a headline, or to make a headline. Precious few will actually put in the preparatory work essential to make hearings more than a soundbite-driven media show. Devoting the time and effort to understanding the legislative and regulatory framework within which our government operates or should operate, takes time and hard work. This is especially the case in today’s technology-driven world; whether the topic is unlawful government surveillance, foreign meddling in our electoral process, or corporations compiling electronic dossiers on citizens without their consent. Yet, it is precisely in these areas that meaningful oversight is – and will likely remain -- in the shortest supply.

The substantive problems surrounding the reach of social media platforms, the power of internet search engines, and consumer privacy -- all left largely untouched by last week’s Facebook hearings -- will, in the lead up to the Fall elections, fade away as Representatives and Senators shift attention to easier subjects like bombing another Middle Eastern country, or funding The Wall.