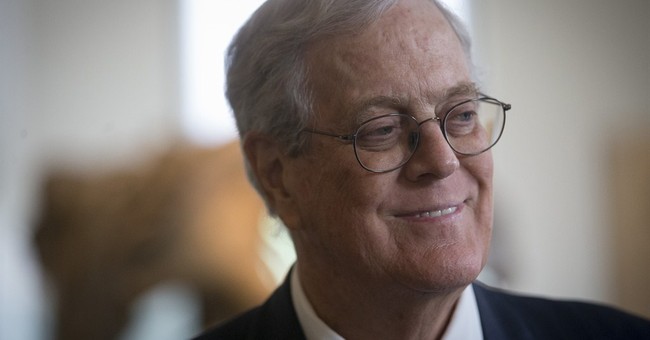 Because of their wealth and their passion for funding free market causes and organizations, the Koch brothers – Charles and David -- have been blamed for everything from backing desegregation in schools, to “repeal[ing] every major piece of legislation that has been signed into law over the past 80 years that has protected the middle class, the elderly, the children, the sick, and the most vulnerable in this country”; as claimed by Socialist presidential candidate Bernie Sanders in a section of his official Senate website dedicated just to the Koch brothers.

Socialist hyperbole aside, the Left’s obsession with the Koch brothers was on display just last week in a speech by President Barack Obama at the National Clean Energy Summit in Las Vegas. Obama accused the brothers by name of using their powers to squash solar energy and keep emerging clean energy companies from becoming a competitor to their fossil fuel empire. “That’s not the American way,” Obama lectured from his bully pulpit as his Senate lapdog, Harry Reid, watched approvingly; concluding that the brothers are “rent seeking” and “trying to protect old ways of doing business.”

The irony of the President’s sanctimonious speech against “crony capitalism” was not lost, least of all on Charles Koch, a main target of Obama’s tirade. “I don’t know whether he knows what that phrase means, but ‘rent seeking,’ of course, is, in economic terms, getting the government to rig the system in your favor,” Charles told Politico. “And that’s exactly what these so-called ‘renewable energy’ proponents are doing.”

In fact, only a day before Obama made his politically-based remarks about the Kochs’ opposition to further taxpayer-funded gambles on green energy companies, the Inspector General for the federal Department of Energy released its findings from a four-year investigation into how Obama’s first major “renewable energy” loan, to a then-little known company called Solyndra, ended up costing taxpayers more than $500 million. The report found that Solyndra executives intentionally mislead officials overseeing the loan process, and that “political pressure” stemming from “significant interest in the program from Department leadership, the Administration, [and] Congress,” were reasons why these discrepancies were not caught.

The Energy Department called the findings of this report “lessons learned” for how to grant an additional $40 billion in loans to other companies in support of “green energy” projects. Instead, the report should serve as a clear reminder why corporate cronyism masquerading as market “incentives,” is bad for the market and especially for the American taxpayers who wind up footing the bill. The Koch brothers have been warning and fighting against such politically-motivated market manipulation for more than five decades.

Charles Koch readily admits that Koch Industries indirectly benefits “tremendously” from federal subsidies, simply because of how deeply imbued corporate welfare is within the nation’s economy. However, were it up to the Koch brothers, they would “do away with them all.” “And, believe me,” Charles Koch continued in his Politico interview, “a lot of our products are protected by it.” This axiomatic view can be seen in the Kochs’ support of the Keystone Pipeline; not because they stand to make a huge windfall -- if anything, it would create more competition for them -- but because it is the free market thing to do.

Therein lies the key difference between the Kochs and political hacks like Obama, Reid, and Rep. Nancy Pelosi, all who have used their positions to enrich themselves, their supporters, and those around them. When it comes to corporate welfare, the Kochs sound like the liberals Obama and his cohorts want to be but cannot, because of their addiction to the power corporate welfare gives them inside the Beltway. As one of Ayn Rand’s “moochers” in Atlas Shrugged notedwhen discussing sweeping new limitations on business, “The people need it…so we don’t have to consider anything else.”

Of course, it is not only Democrats who justify corporate welfare as a means by which they are furthering the interests of taxpayers. Republican governors frequently use the power of “targeted” tax incentives as a way to lure companies into relocating to their states. Bringing more jobs into the state often appears a win-win for taxpayers and for governors facing reelection; but such gambles do not always go according to plan. For example, North Carolina officials helped negotiate a 10-year deal worth $22 million in tax incentives for the Chiquita Brands International to relocate to Charlotte, but the company left only a few years later; mouthing a hollow promise to repay the incentives it received as a part of the deal. Republican Governor Pat McCrory wasted no time in seeking more funding for this incentive program to use for other prospects.

Similarly in South Carolina, Republican Governor Nikki Haley is under heat for increasing her state’s “incentive” funding by reportedly 800 percent during her tenure.

Be it solving “global warming” or trying to create more economic opportunities, in reality government officials have neither the right nor the ability to play “venture capitalist” with taxpayer cash. The government’s job is not to pick the winners and losers in the market place, whether by direct incentive payments or indirect tax benefits.

However, when a Republican presidential candidate like Donald Trump can brag openly about “buying” politicians and be cheered for it by his fans, we are going to need many more “Koch Brothers” than just two, if we are to have any hope of seriously dismantling the crony capitalism that has so deeply infected our government and our economy.