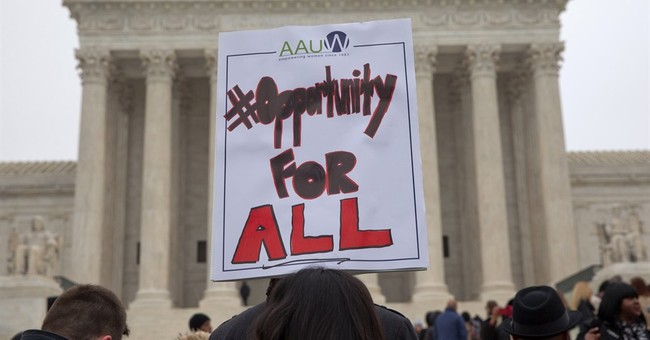 Wasn't there a time when universities dedicated themselves chiefly to the spread of knowledge and wisdom, or, you know, to anything besides social engineering, cultural manipulation and political posturing?

We shouldn't be surprised, in this day of wallpaper politics (i.e., politics everywhere you look), to find the mighty University of Texas urging the U.S. Supreme Court to allow it the political mission of "diversifying" its student body through, among other raw tactics, racial discrimination.

UT is embroiled in a battle with the courts over its claim that a "holistic" admissions policy is needed to make the Austin campus less white, in order to reflect changing demographics. Nobody in his right mind would argue against the intended result -- a diverse campus -- were it not for the university's plea to be excluded legally from the requirement of treating student applicants equally, judging them only on merit rather than such non-academic characteristics as leadership qualities, community service, socioeconomic status or race. That last criterion most of all, perhaps.

We have been here before, you might have noticed. We never seem as a nation to abandon completely the premise that to be something is better, for admissions purposes, than to know something or to demonstrate the possibility of knowing even more at the end of four years.

Calling the University of Texas' purposes "non-academic" doesn't cut the ice it might have prior to our culture's embrace, in this post-civil rights era, of social transformation as our most important goal, one that trumps even equality. Equality would compel schools to use, in their selection, the colorblind process supposedly required of public institutions since Brown v. Board of Education in 1954. When colorblindness yields the wrong result (e.g., too many whites at UT), that's when it has to stop and a form of socially approved discrimination has to commence.

The argument, as I say, is familiar. We have chewed over these matters since the late 1960s, without resolution. Nothing the court says about the University of Texas will put the matter to bed. The cry will continue: Discriminate! Discriminate!

"To what end?" is the larger question. Social peace? That's hardly the reality, when the inevitable result of intentional discrimination is resentment and anger on the part of the discriminated-against. The butcher who puts his thumb on the scale in order to increase his profits rarely earns the gratitude of the customer.

But wait! Aren't we here to redress the awful legacy of slavery by admitting to the University of Texas more descendants of slavery's victims (in addition to the sons and daughters of other races that happen to be growing demographically)?

What's the purpose of reducing students with minds and hearts and aspirations to mathematical units? Justice Scalia, during arguments on the UT case, wanted to know why students unprepared for the rigorous atmosphere of a top university shouldn't attend "a less-advanced school" where they do better, and for his breach of political courtesy Scalia has been bruised and abused in the liberal press.

He was right, of course -- but only partly so. He was right in that it's hardly a favor to a less-college-ready kid to throw him to the academic lions. He was wrong, possibly, in considering today's UT an academic lions' den.

Smart people teach there; smart people study there. But they may be doing so in dwindling numbers, given the school's apparent commitment to things apart from knowledge and wisdom, things such as laughable arguments in court and blatant disregard for the plain meanings of words.

But I will admit: They have a pretty nice football stadium at UT.