The Rembrandt of Overstatement 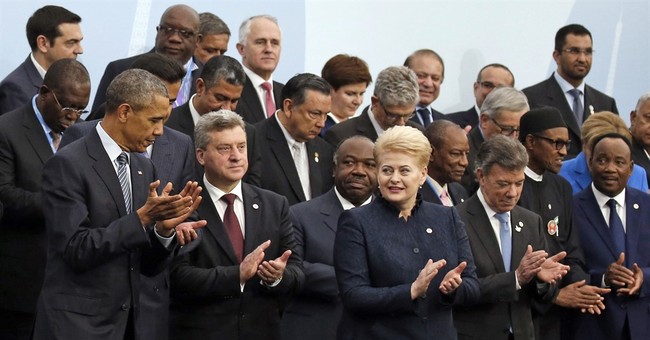 The president of the United States landed in Paris on Monday, his mouth full of grave and ominous reproaches for the heedless. Climate change, the central topic of the world summit he expects to lead, must be dealt with. Do we hear that? Must be dealt with! Or else.

"I believe, in the words of Dr. Martin Luther King Jr., that there is such a thing as being too late," affirms the president. "And when it comes to climate change, that hour is almost upon us." But to be believed you have to be believable, a point that hardly ever seems to intrude on the private thoughts of Barack H. Obama.

Obama is the Rembrandt of overstatement and the Beethoven of forgetfulness when it comes to pledges, which he might have figured he would never have to uphold in the first place.

The times, according to pollsters, are cynical and disbelieving when it comes to political declarations and pledges. Politicians of all stripes suffer from widespread disdain. It is not a reality to celebrate, in spite of its nearness to actuality. It is a reality to remind us of any number of mournful and melancholy truths, beginning with the folly of consigning too much power to politicians.

The particular truth of which Obama constantly puts us in mind is that human institutions depend on the credibility -- the believability -- of the particular humans who run these shows. When we cease to believe what our alleged thought leaders think we should believe, they might as well keep their mouths shut for all the good they can do.

People who don't like hard truths will accept such truths only from those known for being honest though the heavens may fall. The easier, if less commendable, approach is hiding news that is not in line with the mission.

Listeners have to be taken in hand, you see, chucked under the chin until they burble with delight. The custodian of Untruth sees himself as protecting voters (not to mention his own hide) from the hard choices they would have to make in the event they really knew the score. He'll sell his own version of events and deny there could be any truth in competing narratives. That's his modus operandi with climate change.

The legend of "Climate Change," whether or not it deserves those ironic quotation marks, derives from the self-advertised ability of "Science" to define a problem approachable supposedly by scientists and only scientists, not one of whom the public at large could pick out in a police lineup.

No less amazing than "Science's" ability to identify the problem is its flair for specifying the remedies. Do X, and the seas rise only an inch or two. Do Y, and they overwhelm Long Island. Whence all this formulaic certainty and the sense that to save the planet we have to wreck, for starters, the oil industry?

The climate-change lobby and the president have in fact a common problem: namely, credibility. I have alluded to the lobby's -- or "Science's" -- propensity for fogbound, don't-you-dare-question-me certainty. The president inherited or cultivated the same chest-thumping propensity. He's going to tell us how it is. And does he ever expect agreement. He might be surprised when he doesn't get it. Congress and the general public, here and abroad, seem far less nervous about climate disintegration.

Consider that this is the president who drew that "red line" concerning Bashar Assad's use of chemical weapons; promised that you could keep your doctor if you wanted to; and declared just before the Paris massacres that ISIS had been "contained." This same president wants the world to swallow his baited hook on climate change, discarding, in the process, cavils, questions and contrasting ideas. He's thoughtfully made up our minds for us, believe him or not.