The Sad Fate of Jim Webb 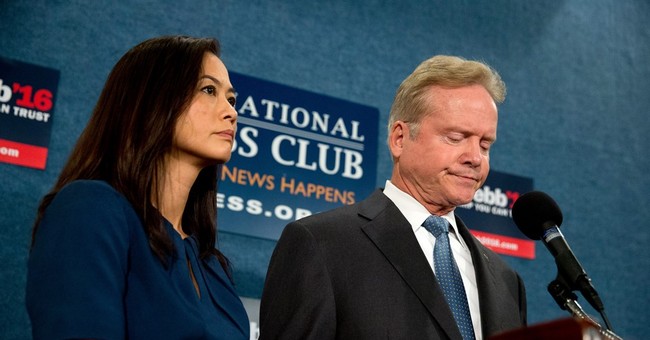 Trending
With Jim Webb's resignation from the presidential race goes a piece of history. Will a moderate to maybe-just-a-little-bit-conservative man -- or woman -- emerge ever again to offer Democrats a national leadership profile independent of the Hillary or Bernie template?

You never know. But I don't believe I would give long odds on it.

Gone are the days when a Democrat with interest in free-market principles or strong national defense could think for one minute he might command his party's interest, far less its approval.

The Democratic party of the 21st century belongs to Hillary Clinton; it belongs to Bernie Sanders; it belongs to Nancy Pelosi, Liz Warren, Debbie Wasserman-Schultz and fellow tribunes of centralization in all things, fellow apostles of complete American isolationism. The Jim Webb-type, for all intents and purposes, is dead.

Well at least he tried, to be sure. Webb's presidential candidacy was always a "Huh?" What's the guy up to, anyway? Jim Webb, decorated Marine hero in Vietnam, award-winning novelist, Navy secretary under Ronald Reagan, always seemed an unlikely Democrat. Yet as a Democrat he handed Republican George Allen his hat in Virginia's U.S. Senate race.

I sometimes failed to get the alignment of Jim Webb, given his Republican, or Republican-like, accolades, but I have always regarded him as an honest man. I gave him as much slack as circumstances seemed to require. I knew him in the end to be a patriot -- a spokesman for a strong America, not the kind of weak America his fellow Democrats seem to be designing.

How he could have supposed the Democrats of 2015 would give him the time of day I can't imagine. His poll ratings hovered in the 1 percent range.

So he's gone. And so, as I judge it, are all present hopes that his party might resist, or even recover from, the lunar pull of the philosophical tide toward the hard left.

In the Democratic debate, he got no licks in at all, seeming more often to complain of his reduced status on the stage in Las Vegas than of America's reduced status in the world.

Not so long ago the Democrats could be relied on, in the event of their assuming national predominance, to take pride in American achievements, American obligations. They weren't Republicans, clearly, but party figures such as Harry Truman, Dean Acheson, Henry (Scoop) Jackson, Hubert Humphrey and, later, Joe Lieberman could be counted on to acknowledge freedom as a basic American priority, both home and abroad. I don't mean these people were conservatives; I mean they were people with whom conservatives could do business when necessary.

Webb sought to raise questions uncomfortable for his party -- e.g., what happened to the America that cared about freedom, here and abroad?

Freedom? Um, what? The task of Democrats lies elsewhere -- in smoothing out inequalities, in assuaging guilt over our frontier robustness, and so on. There's a new kind of Democratic Party, and it's got no time for a guy like Jim Webb, whose fundamental assumptions about life don't match up with the national platform. Get over it, Jim. Your America has had it -- as we see increasingly, and will understand better still when the horrors of the present election season have passed.