A 'Damascus Road' Vision for Castro? 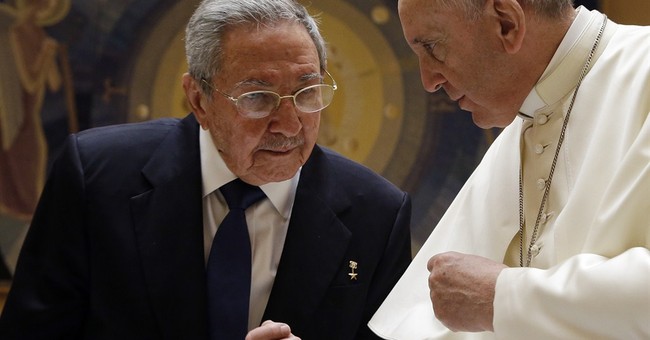 You might have another notion entirely. I prefer to see the fruits of Raul Castro's semi-conversion to Catholicism before reaching conclusions as to his sincerity.

"I read all the speeches of the pope, his commentaries," said Raul on Sunday, following a meeting at the Vatican with the hugely popular Pope Francis, "and if the pope continues this way, I will go back to praying and go back to the church. I'm not joking."

Magnifico! And then how quickly do the Cuban peoples' shackles fall off? Freedom of speech returns ... when? Not to mention, in the present context, freedom of religion?

Liberal admirers of Pope Francis are likely to seize on Raul's Vatican epiphany as heightened evidence of the pope's unanticipated impact on the secular world: his high ratings in the polls; his friendliness to social outcasts; the rapture he excites when the media catch him downplaying the "culture wars."

Take E.J. Dionne, writing with adulation in the current American Prospect: "A strong case can be made that Francis is not a liberal but a radical" -- open to seeing, and preaching, mercy for the downtrodden and the sinful as primary to the Church's mission, instead of emphasizing that dreary stuff about right teaching. As if concern for right teaching, in the mode of Benedict XVI and John Paul II, contradicted rather than neatly affirmed the need for Christian mercy!

Mercy, a central teaching of Christianity, is the theological property the people of Cuba would most gratefully receive from Raul and his corpse-like brother Fidel, who came to power in January 1959, promising to raise up the poor and stomp the wealthy into the substrata of existence. Everyone in Cuba, it turned out, was wealthy! This is to say that everyone during the ensuing 55 years -- saving only the Castro cadres -- got stomped on and ground down. The hour the pope spent privately with Raul must have been rich, so to speak, in dialogical possibilities.

An everyday Episcopalian -- the one presently talking -- has no business trying to sort out the entanglements that have sprouted in Rome since Francis became pope. The Francis-Raul interplay offers at least a chance to examine the bleak prospects for getting the world exactly right, no matter who the pope is, no matter what those in charge call their political operation. "My kingdom is not of this world," said Jesus. No evidence to the contrary has ever emerged.

Nobody doubts the nobility of the call to succor the poor and the suffering. It's the sentiment that produces wild men like the Castros, in every age: The trouble being that the wild men always think they can change the social order through orders on paper. And with spears and arrows and guns.

Jail doors slam; heads roll. The new freedom turns to slavery, as in Cuba. This is because you just can't trust people! They muck up everything! We -- the enlightened -- have to do things for them. Our way. We'll tell 'em, and give 'em, what they need. Meanwhile, everybody shut up!

What Raul Castro may have heard from Pope Francis about the Castro brothers' approach to "liberating" the Cuban people would be interesting to hear. The larger question might be, where does God come into all this? Does he require redistribution of wealth? The communists suggest as much, as do, in truth, growing numbers of U.S. politicians and intellectuals: confident with the confidence of all deep thinkers that they understand society's deepest needs. Don't talk to these people about freedom, buddy!

Really? Why not, when God himself invented freedom, as a gift to humanity. He understood that many would abuse the gift or fail to use it advantageously. Did that mean an outside party should take over for them, getting things done "the right way"? As in Cuba?

One doubts the pope told Raul any such thing. "The Marxist ideology is wrong," Dionne quotes Francis as saying in another context, all the while affirming that particular Marxists can be "good people."

Politics and religion -- the watchword here is "Careful." Repeated again and again.