The Second Coming of Jeb 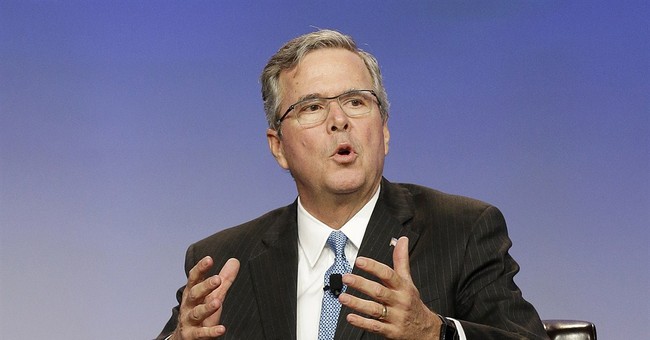 Back in the '90s I bantered once or twice with Karl Rove. It had to do with the Bush boys, George and Jeb.

I said something like, "Come on, Karl" -- we enjoyed a slight and, to my mind, professionally cordial connection through Texas journalism -- "Jeb's the conservative. He's the Bush we ought to want to see in the White House." This was assuming, of course, that the stars were in alignment for a victory in 2000 by either Bush boy, upon the constitutionally mandated retirement of Bill Clinton.

Jeb was governor of Florida then. He talked and played a good conservative game on policy, but Karl was having none of it. George W. was the likelier, and more impressive, conservative -- just the conclusion you would expect from one who was already an official adviser to George W.

Oh, well, nothing much to present purposes here save the topic of Jeb's conservatism as Mitt Romney's withdrawal from the presidential sweepstakes leaves Jeb as the high-dollar establishment candidate.

The establishment! Oh, dear. Are we done for? Would Jeb's nomination mean for our sad and suffering country four years of Hillary Clinton sitting down at night with husband Bill to plot the country's final downfall.

Here is my own advice on that score for conservatives less than overjoyed -- if not horrified -- at the prospect of another Bush presidency. My advice is: Cool it for now. Consider two things we don't yet know: 1) what the Republican race will look like a year hence; 2) no less important, what Jeb Bush -- if he retains the establishment's affection and money -- will be talking about, as opposed to the things conservative activists most fear he will talk about; to wit, loose national borders and national standards for the public schools, and not wanting to repeal and replace Obamacare.

He may so talk, and then again, he may not. We should wait and see: That would be my advice. We should avoid prejudgment in the matter of Jeb's fitness for the urgent task of mopping up after Barack Obama.

A conservative we manifestly want and need for the job -- a president severely indisposed toward the half-baked notion that what this country needs is wealth redistribution; a president who understands the presidential task not as commanding the economy to grow but rather incentivizing Americans to do the planting and plowing. We need further a conservative president who takes seriously the world's need for American leadership, who honors America's mostly successful experience with balancing and limiting government power, who thinks untidy freedom a more virtuous end for government to pursue than the architectural neatness of plans hatched in congressional hearing chambers.

Might Jeb Bush conduct such a presidency? Hard to say. We haven't watched him campaign or listened to his speeches. The time for throwing him under some lurching bus painted a patriotic red, white and blue and blaring Ronald Reagan speeches has clearly not yet come. If it does come, we can take him by both legs, chuck him under and hasten to the standard of a likelier candidate. Scott

That's not my principal point. That point would be, the habit some conservatives need to shed is that of flinging down ideological pronouncements as if a satisfactory answer to each were dispositive in the search for a new president.

This presidential thing, in 2016, isn't about haloed purity on every momentous issue. It's about winning the election with the best, most conservative candidate possible.

I have been covering politics for half a century, and it appears to me truer today than ever before that the quest for purity -- on which so many seem so intent -- is organized insanity. In this post-Endemic existence you find not purity but varying degrees of non-impurity. You do the best you can. Then you have a stiff drink and cross your fingers.

All I say definitively is, we've no reasonable choice but to watch, and to see.