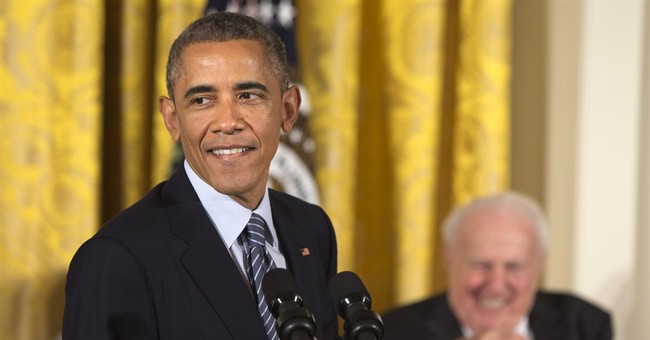 Trending
Thanks-mas -- as our new winter holiday deserves to become known, with pumpkins and red-and-green lights merging in anticipatory celebration -- only partly occludes the opportunities for national and personal gratitude widespread in Novembers past.

Such opportunities as can be found might, if grasped, afford a few moments of useful reflection on America's present challenges. Those challenges have many forms and shapes, but a certain political character seems to shove most others aside. This makes a certain kind of sense. The big news stories are about politics: the president proclaims how it's going to be on immigration policy; the secretary of Defense jumps from a White House window, propelled by supposedly friendly hands; a new Congress prepares for confrontation; the Supreme Court prepares to tell us what we think about everything or what we'd think if we all wore black robes.

At what we used to call Thanksgiving, before it merged with Christmas, divine blessing used to be invoked upon the doings of the American people; that "our land (might) still yield her increase" as we raise the song of harvest home -- whatever "harvest," in the minds of city slickers, might mean.

There was more of dependence in those humble old attitudes than gets spotted regularly around the country these days. We needed help. We couldn't do it all ourselves, try as we might.

It may not be so awfully different now. The source of help, nevertheless, has changed. At the top of the pecking order once was God -- the same God whose aid and succor the Pilgrims' fathers (doubtless the mothers, too) had invoked in the wind-blasted setting of colonial Massachusetts. There was great confidence in the God who presided in name at least over the Thanksgiving table. He was maker of heaven and earth. It didn't get much better than that.

The god of the 21st-century Thanksgiving table is more a whole Olympian assemblage. The god -- make that "gods" -- of the modern Thanksgiving feast are known generally as public servants, whether elected or appointed and confirmed by the Senate.

The resources of government are vast indeed: as limitless as the willingness of taxpayers to submit to taxes and other measures of economic redistribution. It is no wonder the table talk is of elections and laws and regulations and edicts and can-he-get-away-with-its. And sometimes: How has it come to this?

A not-especially-pious founding father, Benjamin Franklin, gave spontaneous tongue to an abiding truth about the state of the republic. Asked -- we all have heard this -- what kind of government the constitutional convention had created, Franklin replied: "A republic, madam -- if you can keep it." "(N)o other form," Madison would explain, in Federalist No. 40, "would be reconcilable with the genius of the people of America."

The keeping of the founders' republican constitution has become the great task of our time: a task made no lighter -- heavier if anything -- by a recent presidential order (you could call it a decree without fear of reproach) to regulate immigration outside the legislative process established in the Constitution's very first Article. It is the sort of thing we might expect when all important questions become power questions -- who's-in-charge questions -- as opposed to the questions many once saw as deeper: virtue, peace, freedom of worship, the blessings (as John Dickinson put it) "of equal liberty and common prosperity."

Thank-mas returns us, insofar as we pay attention, over the giblet gravy, to the intricacy and the urgency of putting aside power-seeking in order to assess the realities of the human condition. Free or enslaved, double-tongued or forthright, riotous or peace-loving -- such are the points of reference for aspirants to the blessings the founders sought in perpetuity, against the crafts and assaults of those who ignobly call Power a holy end in itself.

Again comes the opportunity to declare ourselves, in spite of moral depletion, discouragement, and bone-tiredness; in spite of the feeling we'll never get this thing right. Sometimes, to our surprise, we do get it right. On such blessed occasions, Thank-mas turns once more to Thanksgiving.