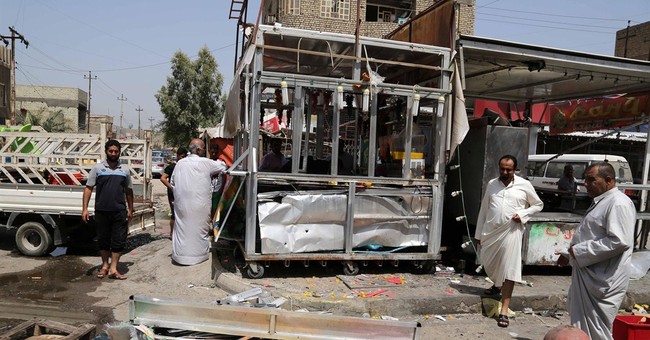 Is anybody overjoyed, rapturous, bowled over with delight at seeing the United States again involved in Iraq?

No? We can move on then. The United States is involved in Iraq. Concerning which involvement we have two choices: 1) Mess it up, getting lots more people killed than have been killed already; or 2) help the locals to engineer something like a standoff between Iraqis able to pass for reasonable people and those who, on present evidence, might have earned censure from Genghis Khan for excessive devotion to human slaughter.

It may be a while before President Obama figures out what he has gotten himself into -- first on account of prematurely pulling all American troops out of Iraq, second by sending back the Air Force to protect the Iraqi minority known as the Yazidis, along with such Americans as can still be found among our endangered friends, the Kurds.

Americans unhappy over events in Iraq are certain to grow unhappier as Obama -- in-between Democratic fundraisers -- fumbles his way toward alternative No. 2. That's assuming he understands, as may not be the case, how small is the corner into which he has painted himself. He won't do boots-on-the-ground, he promises, but without those boots, what are the chances of deterring the homicidal maniacs who call themselves the Islamic State? Close to zero, one has to guess, based on the maniacs' military successes.

Calling off the air strikes isn't remotely possible so long as the jihadists remain free to range throughout Northern Iraq, killing Christians, Yazidis and anybody else in their way. Now that he is rightly back in Iraq -- because how could he have left all those jihadist victims, present and potential, to die? -- Obama will find how little room he has in which to operate.

Even Hillary Clinton has emerged to do the Maggie Thatcher bit, saying, "Great nations need organizing principles, and 'Don't do stupid stuff' is not an organizing principle." No, it's really not -- even when White House foreign policy insiders give their favorite coined phrase more astringency by replacing "stuff" with an earthier word. What's the strategy here? Mrs. Clinton is asking. What are we trying to do? The reason we're not told is likely that nobody knows the answer. We're making it up as we go.

Wherever we are now in Iraq/Islamic State/Kurdistan terms, our presence there is because of the dynamics of the 2008 presidential election. There was no "organizing principle" then to the Obama outlook on foreign policy -- apart from Obama's desire, shared by much of the electorate, to run as the Un-Bush: peaceful, accommodating, unfriendly to "American exceptionalism." Boy, did he ever pull that one off!

Whatever Bush's missteps and "misunderestimations" as to foreign policy, the much-derided "W" was realist enough to know that maintaining a distance from some problems only makes them worse. The Syrian rebellion -- out of which the Islamic State emerged -- is case in point. When people who say they hate you are getting stronger and stronger, killing more and more of your friends, don't you need at least to ask what might constructively be done about it?

Or is it better just to wait and see what happens, the path our president and his foreign policy team chose on account of ... what? Disdain for Bush and Dick Cheney? Fear of a leftwing-isolationist insurgency among Democrats? Authentic if misguided conviction? All of the above?

The consequences are, in any case, plain to see. The New York Times quotes an Islamic State member who responded to an Internet message. Abu Abu Khadija says, "Yazidi women and children (are) dying from thirst and starvation. I saw them with my own eyes taking their last breath; this scene awakened all my pains and sorrows." Iraq's human rights minister -- without noting the comparable plight of Iraqi Christians -- says the jihadists have now killed at least 500 Yazidis.

Of course, we -- the United States -- refrained from doing "stupid stuff."