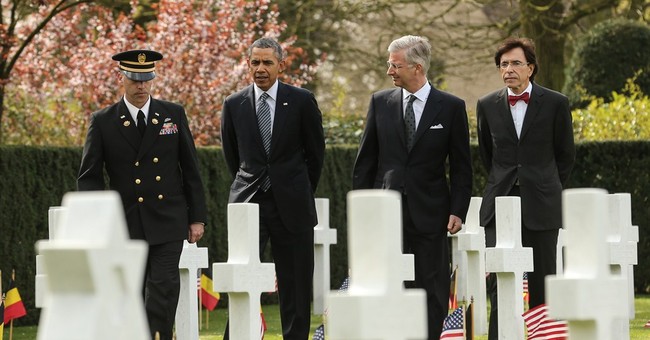 THE car. You know? The one positioned, in blood and early 20th-century elegance, at the center of modern history; the open car carrying the heir to the Austro-Hungarian throne, and his wife, when a teenage terrorist in Sarajevo shot them dead on St. Vitus Day -- June 28 -- 1914, setting off nearly uninterrupted shockwaves of horror. Or so we generally hear. I will come back to that point.

I saw the car nearly half a century ago at the Austrian Museum of Military History in Vienna: large, dark, eerie. The sight was akin in my mind to the notion of inspecting the cutlery employed by Brutus and Cassius on mighty Caesar's carcass.

March 15, in 44 B.C., and June 28, 1914 have historical consonance. They unleashed large and bloody events: the more recent of which we have begun already to commemorate.

The June 28 assassinations, as we know, commenced a series of calculations and miscalculations that produced the most catastrophic and haunting event of modern times -- the Great War; the toppling of empires, the implantation of fear and doubt in minds everywhere. Nobody "wanted" the war, though maybe the Germans, who backed the Austrians in their desire to avenge the murders, were more amenable to it than the other warring parties.

Everyone is agreed -- no detailed recounting seems necessary -- that European civilization died suddenly in the 1914-1918 war, save for those leftovers lost between 1939 and 1945, and afterward. Thus wrote England's great modern poet Philip Larkin, in "MCMXIV": "Never such innocence,/Never before or since/As changed itself to past/Without a word."

The lessons of 1914 are hard to sort out. Did the world suddenly go crazy? It seems crazy to tear down your house and everyone else's. Was "the system" so far amiss that it lacked the corrective tools -- the ability to call off, or better yet, prevent madness? "Systems" had gone off the track before -- as far back as anyone could recall. The effects were worse in 1914 -- worse by far than in 44 B.C. -- on account of the technology and techniques that had made war unspeakably horrible, without anyone's noticing until too late. Likewise daily life around the world had grown entangled and interrelated. Immunity from disaster had receded vastly.

The lessons of 1914 are in truth hard to sort out; their glare blinds the eyes. That "innocence" of which Larkin spoke is not to be equated with purity. It was ignorance -- blindness to human limitations, and to the consequences of stupidity and inhumanity. It was human malice (the execution of hostages, the destruction of homes and churches and libraries, slaughter as a goal. We possibly didn't think we were capable of it, we humans. No, no, not in the sanitized, purified, electrified 20th century, held together by science and rationality! We proved more than capable. We did it. We all -- by virtue of our membership in the human fraternity -- did it. And keep on doing it.

Much more than, "Who started the war in 1914?" that is the question we could profitably focus on in 2014 -- "Who are we, as opposed to who we would like to imagine we are?" Are we nuts? Human character is more fittingly under the microscope than are the acts and operations of humans who in a time not so long ago wore crowns and plumed hats as if every knob, every feather infused their minds with Right Knowledge.

The continuing imperfections of the human race are the headline story of 1914, not how one grossly imperfect Serb lurched up to a car in Sarajevo, killing two innocent people. The world of 2014 is saddled with the same encumbrances as the old one -- gluttony, pride, anger, lust and such like: just not so well-dressed, so well-perfumed. We might learn something by looking around. That is, if we could for a moment take our eyes off our own allure, our science and soaring landmarks, suspending the fateful certainty that any gods are still hovering out there, fine -- we just don't require their services.