The Fall of Big Labor 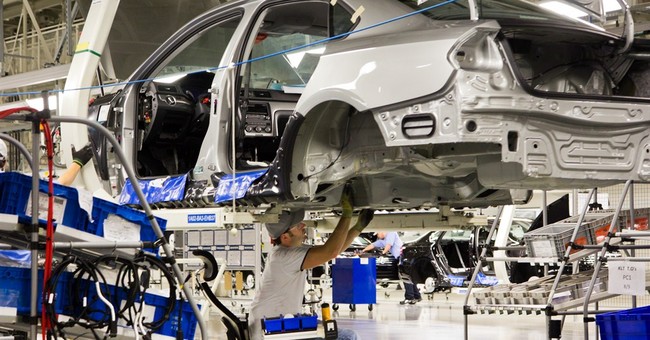 Big Labor took a roundhouse punch on the chin a week or so ago, and the ringside clatter made it sound as though nothing much had changed in America since the days of John L. Lewis.

Raise your hand if, along with me, you have the slightest recollection of John L. Lewis, the formidable, bushy-eyebrowed head of the United Mine Workers of America, who once personified the combative force of the post-World War II labor movement. In those olden times, shaped by battles over pay and working conditions, American unions attained unprecedented levels of influence. Only to decline from there -- descending lately to the agony of an election the United Auto Workers seemed sure to win.

In its quest to organize a Tennessee Volkswagen plant, the UAW -- likely the principal element in the diminishment of the American auto industry and the accompanying impoverishment of Detroit -- enjoyed significant advantages. The National Labor Relations Board put its thumb on the electoral scale. VW's management gave union organizers the green light to campaign, non-union forces the red light. VW wanted to establish at the plant a "worker's council," as in German plants. Why, whatever would be the problem with such a collaboration?

Only perhaps that unions, as a tool for the advancement of worker interests, are old hat -- getting older and more tattered all the time. Just 11.3 percent of American workers, by last year's count, belonged to unions, vs. 20.1 percent in 1980.

And yet ... and yet ... you'd sometimes wish John L. Lewis were still alive, to take in the media din concerning the loss in Tennessee. The Tennessee vote -- just 1338 workers participated -- was small beer, partly concealed by the media's insistence that "anti-union" sentiments had prevailed.

Oh, come on. Anti-union? (SET ITAL) Against (END ITAL) unions? To the hot place with 'em -- that sort of thing? Why bother being anti-union? The John L. Lewis days are done. Just 6.7 percent of private sector workers belong to unions these days. The harm the old UAW did by making auto production in America barely affordable and often not that -- the harm's done. It's past.

The public, not the private, sector unions are the present pain-in-the-neck for America -- and, to tell the truth, for themselves.

It was said of the French Bourbons after their return to the throne, Napoleon having been disposed of as well as Robespierre, that they had forgotten nothing and learned nothing. So with the public sector unions, especially the schoolteachers.

They forget the fate of the arrogant; e.g., the United Auto Workers, who long ago ceased to dictate what Americans would drive. They can't figure out that when you stand in the way of seriously needed change or reform you get knocked off the road. Which brings up the case of the teachers' unions.

Unions constitutionally hate reforms that take away jobs. They'd generally rather just muddle along than allow needless or ill-performed jobs to go away. But aren't the schools in question public schools? "The public be damned," as Commodore Cornelius Vanderbilt memorably expressed it. The teachers' unions couldn't agree more. Charter schools and school choice theoretically drain the educational swamp of students with enough energy to do better. The unions' tacit assumption is that you can't improve bad schools or make bad pupils better. But you can preserve jobs! The unions set their collective face like flint. "No," is their favorite response to requests to help things along by acknowledging the need for change.

A visit to that Tennessee VW plant might open some eyes about the fate of unions that ignore reality. But we shouldn't count on it. "No" is such an easy word, especially when you say it all the time.