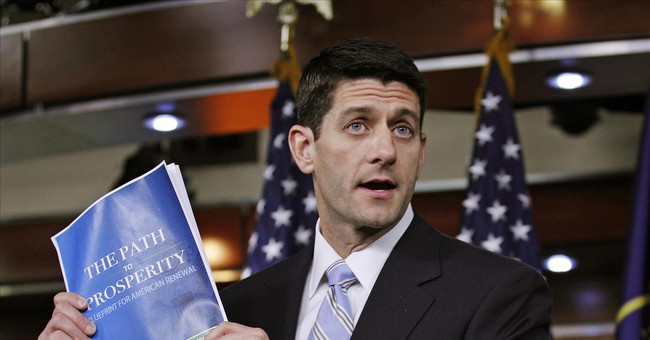 Trending
The reason U. S. House Budget Committee Chairman Paul Ryan should be president -- now, if not the day before yesterday -- is the same reason the country may eventually lick its budgetary problems. He bows his neck and keeps acomin' -- knowing intuitively that everything hard, from the building of Rome to the taming of the federal budget, requires not merely time but the services of someone willing and able to mix the mortar.

Ryan seems up to the job, and who knows, under his -- or comparable -- leadership, we might get something done. "I gave up fear for Lent two years ago," he recently told The New York Times' James B. Stewart.

Good thing. We need a leader who, for a change, does things because they seem to him the right, rather than the cleverly political, things. Ryan, the Wisconsin congressman who came to prominence as an Obamacare critic, has been trying heroically to make Congress face the same reality ordinary people confront whenever the money runs out.

Ryan's hope is to save the government from itself -- and us, the taxpayers, with it -- through constructive tax reform. His "Path to Prosperity" program would compress our present variety of tax rates to two -- 25 percent for higher-income earners, 10 percent for everybody else -- while abolishing as many as possible of the tax breaks and loopholes that give the tax code its bad name and skew economic decision-making.

The Ryan strategy, which Mitt Romney has praised and Ron Paul, ever the libertarian purist, has blasted -- is simply to play fair with the taxpayers. Take away Congress' bag of party favors, distributed to this, that or the other interest group in the form of breaks, exemptions and loopholes. The loophole for such-and-such an investment (green is this year's color of choice) is a political play-pretty -- a reward for something or a nudge in the back to do something else.

Keeping the government's paws off innocent people's money is a high and exalted mission but not to the point that it distorts economic decision-making. The government would like to steer us toward solar power and electric cars, neither item exactly obnoxious, neither one clearly preferable to purchases the homeowner might undertake with the help of his own brain cells.

Ryan notes another distortive feature of loopholes and shelters. Nearly all, he told Stewart, "benefit the top bracket taxpayers. For every dollar you park in a tax shelter, that dollar is taxed at zero. You take away the shelters, and we can have a lower rate for everybody."

Would all tax shelters just vanish -- poof! -- if the voters sent Paul Ryan enough help? I wouldn't imagine so. The rates on charitable contributions and home mortgages might fall but wresting these deductions from people who consider them part of the landscape would be ... challenging.

No good idea ever made its way unimpeded and unscathed through the democratic political process. Neither is it likely Ryan's very-good-indeed idea will do so. Substantial flattening of rates, along with abolition of numerous shelters, would, even so, produce more taxes from the upper-income earners we are instructed by occupation troops to see them as. Picking up some heir money ought to be fun.

In the end, what's the alternative to Ryan? Those knocking him for proposing too much or too little -- what are they proposing, huh? Turn down Ryan, and what will we do instead? Drift like stately galleons into bankruptcy and national disruption of a high order? Here's a man, Paul Ryan, who actually may not want to be president of the United States -- never mind his brains and courage. His service to voters, carried out from a leather chair on the Budget Committee, is easily greater than any performed to date by certain actual presidential candidates who shall be discreetly nameless.

Just in case, though, let's remember the nature of great presidents, which is in part to discern a real problem, put forth a persuasive answer, then risk much -- even all -- to put things right. Ryan in a nutshell.