A Kind Word for King George 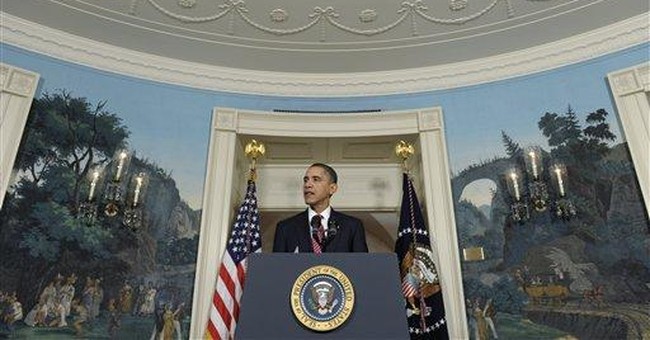 Possibly the best reason for not understanding what's in the Senate health case bill is that no senator knows for sure, not even Harry Reid, without whose subservience to the Obama White House we might have some idea what's up; but let that go...

Few legislative spectacles of our time, and there have been some, gross out the viewer more surely than the Senate Democrats' race to pass a bill they don't understand -- and that in about a week's time, counting Sundays -- in order to "fix" 16 or 17 percent of the U.S. economy.

We overthrew King George to obtain this unwholesome result? Actually, no. The revolutionary generation -- as contrasted with the revolting generation now in charge -- had a sense of limits and possibilities. The present Congress has neither sense: or very much sense of any kind, if it comes to that; because if it did, it would have some idea what it wants to do respecting health care.

We pick up, for instance, today's papers or we log onto various websites. We see Congress hopelessly hornswoggled by the task in which it professes to be engaged, namely making health care better and cheaper for all Americans. We find instead that no one yet knows, or can even reasonably estimate, how much the Reid bill -- which envisions the broadening of Medicare and other last-second maneuvers -- will cost taxpayers and beneficiaries. It just sounded like a good idea, so, you know …

Meanwhile, horns are locked on abortion provisions, on the right to order and import pharmaceuticals from abroad, etc., etc.

An obvious solution is at hand: When you can't figure out what you're trying to do, then stop. Take a break. What would be wrong with taking the time to do the job right -- the same specifications that would apply to a yardman or a CPA? But the Senate Democrats will take no time. They see public disapproval of their plan growing larger and larger. Why if the Senate acted with deliberation, more of its members might decide just to start over again, and that wouldn't do, because the Democrats' point isn't to do the thing right, it's just to do it.

One reads these days about "inflection points" -- a sort of vogue phrase, I gather, meaning a moment poised for a whopper of a change. We really ought to be at such a point with our understanding of the political process. I don't think we really are, but we should be. Why? Because if the health care mess doesn't show us the futility of giving politicians the job of ordering the life around us, what possibly could show us?

A nation of 300 millions doesn't need a gang of -- I leave room for exceptions -- narcissistic power-grabbers defining the terms of daily life for so vast a constituency. We can do better for ourselves. At all events, we could hardly do worse than those purporting to act in our interest yet always finding, curiously, that what serves their own interests must be what serves ours as well: namely, the centralization of everything in Washington, D.C. The better to serve, you know!

The revolutionary generation, which was never as unanimous on policy and outlook as history sometimes portrays them, had more respect for the rights and intuitions of the people for whom they spoke. There's no such respect anymore. We're all a bunch of half wits and children, to hear our supposed representatives. They can't figure out that we can figure out things for ourselves, sometimes with a little help from our representatives; more often, not.

Today's political class is, by and large -- and as I say with due respect to the exceptions -- more than a little selfish, more than a little pigheaded and pretty close to generally worthless. By these folks, our health care system is about to be reordered or, likelier, disordered. Would King George III and his parliament have done any worse? It's too awful a question to contemplate. But some days, some days, you just kind of wonder.