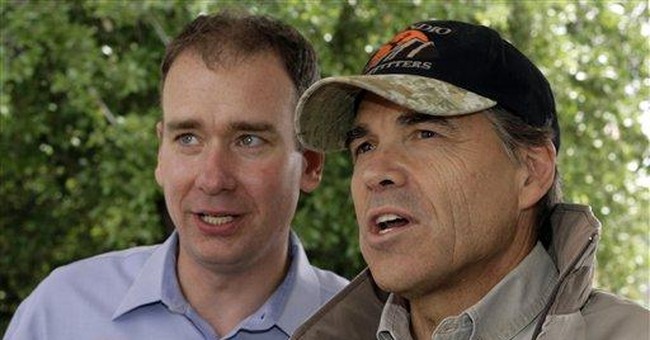 Sneer, sneer, boo, hiss -- and oh, boy! Did the "progressives" ever pour it on my governor, Rick Perry of Texas, for his playful reference at a Tea Party event to "secession" as an option possibly forming in the minds of sensible Texans. Why would we be thinking about such? Because of "progressive" depredations in Washington, D.C., the governor said, if not in so many words.

The establishment harrumphed and gagged and generally went red. Gail Collins of the New York Times: "[H]ave you noticed how places that pride themselves on being superpatriotic seem to have the most people who want to abandon the country entirely and set up shop on their own?" Etc. Ad infinitum.

Come on, lady, back off a little. No one's going anywhere -- as well you certainly know. Nobody's called for a secession convention. I looked up and down the street this morning; not a single effigy of Nancy Pelosi dangled from the live oaks. Driving to the office, I heard no suggestion that we hang Harry Reid, Chris Dodd, or, preferably, both to a sour apple tree.

No matter. Sigh. The progressives have the bit between their teeth and seem bent on the usual pretense that these Texans are a bunch of ingrates whom we shouldn't trust as far as we can throw a grand piano.

Well, you know what? It's too much trouble seceding, even if we could. And, pace the governor, we can't. Rather than the secessionary right he alleged we brought with us into the Union, we brought the right -- undoubted, but similarly impractical -- to divide into five states. We'll have to stick around a bit longer. That shouldn't deprive us of the right to remind fellow Americans of some practices and virtues our land could do well to renew.

A key one is regard for the inherent right of local people, even under a federal union, to defend and oversee their own modes of life. In other words -- golly gee! -- Texans might not want exactly the same things Californians want. They might wish lower taxes and less regulation by government. Their approaches to education and health care and energy might differ as well. So also the ways they deal with simple matters like eating: more sirloins in Texas, more tofu on the Left Coast.

Alas, the Obama regime, as we may decide to start calling it one of these days, has other notions. It appears to cherish uniformity, the close alignment of ideals and methods: everybody doing the same thing the same way for the same reasons.

The Obamanistas may want uniform rules regarding the cars and trucks we drive and the energy those vehicles consume. They want, it seems, national education standards -- a goal furthered, as one hates to acknowledge, by a former Texas governor, George W. Bush via the No Child Left Behind Act.

We may even wind up with national standards for humor. A joke, son, ain't a joke no more, and that's the truth. The governor of Texas no more demanded secession from the Union than he called for a Lone Star Beer to be brought him. He raised an eyebrow; he winked. Never mind. A stalwart "progressive" trying to show up conservatives is ever alert to serendipitous events and occasions.

So maybe he shouldn't have said it. That's from one perspective. Here's another: A Union of the sort our wise and virtuous founders thought they were creating is as loose and flexible as a Union can realistically be made; accommodative of divergent viewpoints, and all the stronger for it, all the more united, too.

The Union we seem to see dead ahead through the windshield, with the people of 50 different states all cuffed together in mutual subservience, isn't what the founders had in mind. Good for Rick Perry on that score: He raised a useful subject, even if to his own detriment. Let's enjoy. Such a moment may not come again for a long, long time.