A Nation Of Sheep 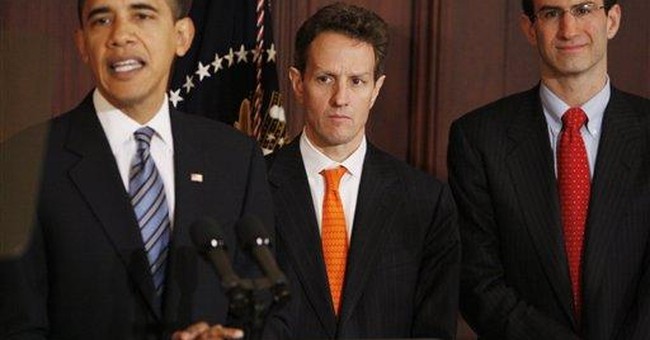 Up in the air (where it generally stays anyway) went the New York Times' snooty nose. Those conservatives, clucked the Times -- railing the way they do against the Obama administration's lurch toward "socialism"! And calling the president "Comrade Obama"! What -- so went the strongly implied question -- do we do with such folk?

How about, for starters, listen to them? They might be less wacko than the Times often considers people who disagree with the Times.

"Socialism," tightly defined, is outright government ownership. It is not, strictly speaking, socialistic to propose that government take over health care policy, redistribute income, prod the automobile industry to make particular kinds of products, and impose a carbon cap-and-trade regime to combat a problem, global warming, that few voters seem to worry about.

Our leader wants the country to be run by its national government. "Run by" isn't the same as "owned by. " The latter is inessential. A pliant Democratic Congress needs only direct the federal bureaucracy to direct states and private companies to act in particular ways -- to do particular things, to spend their money in particular ways. Theoretically the Constitution restricts government to the performance of particular duties. Alas, no one pays attention to the Constitution anymore, thanks mostly to the permissive U.S. Supreme Courts of past decades.

We approach, under Obama-ism, centralization of a sort unattempted here since, under infinitely grimmer economic circumstances, the first New Deal. Mr. Jefferson foresaw something of the sort. He warned, in 1821 that "When government … shall be drawn to Washington as the center of all power, it will render powerless the checks provided of one government on another, and will become as venal and oppressive as the government from which we separated."

Tocqueville seconded the motion: "a network of small complicated rules, minute and uniform" would turn citizens into "a flock of timid and industrious animals, of which the government is the shepherd." Don't bet against it when the administration is undertaking to calculate how much money you need -- and don't need.

That's the bad news. Here's the good. Our leader has overreached. What he's talking about is very unlikely, in bulk, to happen. That could be the upside of our financial mess. The economic assumptions that underpin his plan don't compute. He proposes financing national health care -- one might as well call it that -- through taxing the rich and ending the Iraq war. But if he confiscated every dime in the pockets and purses of "the rich," it wouldn't be nearly enough. What's more, there wouldn't be any rich left to harass -- and tax. You don't "grow" an economy, in Bill Clinton's phrase, by penalizing and pushing around investors and risk-takers. Come to think of it, the comrades of Soviet Russia fetched up -- hard -- against that sovereign human truth. A society run from the top is a dead, or anyway, hardly breathing, society.

It's also the kind for which only the extreme left wing of the Democratic Party voted last fall. Wanting to be shut of George W. Bush didn't, and doesn't, meant wanting to turn one's life over to Washington, D.C. Just how Obama came to think that's what it means isn't plain. Nor does it matter. If Republicans, conservatives, libertarians -- the president's intended victims -- have bat brains, they will understand this moment as shot through with potential and opportunity.

Intellectually incoherent as the GOP may recently have shown itself to be, one would have to be dumb indeed not to understand the recuperative implications in thwarting the proposed federal takeover of America, Inc. What luck -- a chance for redemption! The business at hand isn't labeling the president a socialist or something else; it's holding him accountable for the worst, most dangerous, most -- dare I say it? -- un-American budget proposal of modern times. Yes, yours, Mr. President.