Hands Off The Marketplace 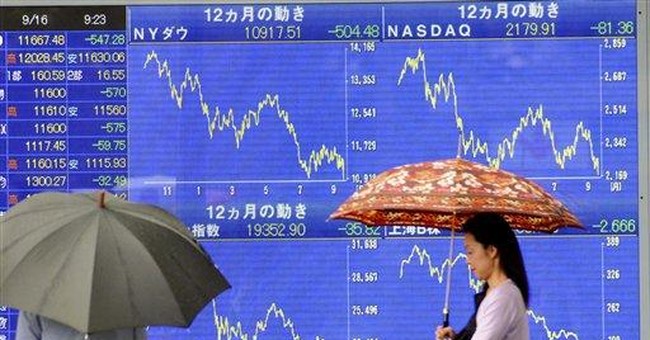 This may be the moment to say something warm and affirming about the marketplace economy -- a "Bush doctrine" sort of positioning (if you don't mind, Charlie Gibson) of the battlefront for the economic wars ahead.

Wars? Goodness, yes. It's a presidential election year, and in presidential years the tendency among candidates is to proclaim instant solutions to whatever problem rears its ugly head. Such as the bankruptcy of Lehman Brothers and the tribulations of A.I.G. and the absorption of Merrill Lynch (Merrill Lynch? Am I writing these words?) by Bank of America.

Bush-hatred -- the operative emotion on the political left -- is going to fix on, who else, George W. Bush as the unique source of our discombobulations. You know -- tax cuts for the wealthy, capitalism run wild. The temptation will prove irresistible, if it hasn't already, to demand that the federal government go in and clean house: teach the plutocrats a lesson.

Calls for tighter regulation will increase, as will demands to reverse, in the short run, almost everything the Bush administration has done since 2001 -- cut taxes, promote free trade -- everything, perhaps except spend wildly on Medicare prescription programs and increase the federal deficit, two Bush specialties with which most Democrats are OK.

The configuration of the financial hurricane will become clear soon enough. The sad thing is, the free market will likely get a disproportionate share of the blame, finding its wrists more tightly shackled if the bloodthirsty critics of free enterprise gain enough power in Washington.

Whenever markets mess up, control freaks blame it on too much freedom, on undue latitude for plungers and gamblers and similar riff raff, when the blame properly rests with the gambling instinct itself, which is a part of human nature. If it weren't, and thanks goodness it is, the first man to peek outside the cave and see the possibilities of a home on the hillside would never have tried it. "Too much risk!" he would have muttered (in caveman-ese).

Nothing ever gets done without risk. Risk entails the possibility of failure, but also of growth and gain. If you don't want growth, you shun risk. Fortunately, capitalists and entrepreneurs constantly seek growth. They gamble. They stick out their necks, sometimes fatally.

Others don't. Either they like what they have and crave no more, or they creep down life's dark and narrow corridors, worried that the ceiling is about to cave in, or the floor give way. More than a few cultivate an attitude of envy. What's with these risk-takers? What's with their estates and helicopters, or just their aura of comfort and economic satisfaction? The human tendency to want what others have inspires politicians of a certain sort to offer to spank them for acquiring it.

The winds howl on Wall Street now, and soon enough voices will begin howling for punishment and prevention of further disorders. Not all calls for prevention are properly seen as squeamish or self-interested. The challenge for voters will be to sort out the sensible from the purely reflexive, malicious and just plain stupid.

The market isn't failing. Judgments made, risks assumed, in a marketplace context are failing -- even as other judgments (as is ever the case) prosper handsomely.

Deliver us, oh, Lord, from these instant, self-justifying proclamations of blame that intensify human crises. Deliver us from the idiocies that accompany the Chicken Little conviction that it's all over but the sweeping out. Everybody take a few deep breaths. Candidates, breathe deepest of all.