The Moose Is Loose 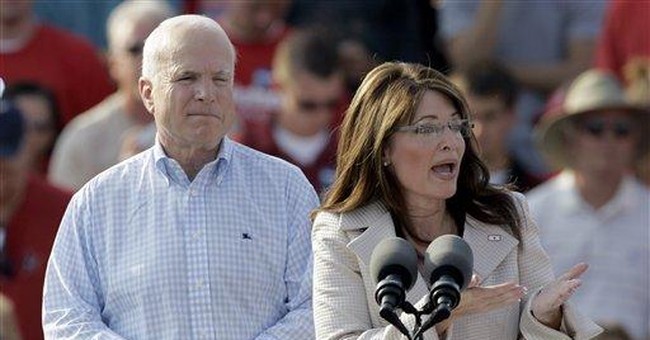 It's a nutty year, a crazy time in our national life, and I've decided to decide -- you'll be glad to hear this, John McCain -- that the ostensibly nutty choice of Sarah Palin as running mate is nutty in all the right ways.

That's to say, it rearranges the political stage just hours after the Obama jubilee in Denver; it upstages, in fact, the Obama call for remaking America; it gives the Republican ticket a shot at, if not "the women's vote," at least the vote of many women who might not have signed on otherwise; it brings to the political fore a refreshing new face; it contrasts that face with the weathered and all-too-familiar features of Joe Biden; it likely invigorates both the Republican Party's pro-life and pro-free market constituencies, which, by the way, don't necessarily overlap; it . well, let's just see. We battered old newsmen know better than to forecast an outcome on the basis of a beginning. Still, we could learn that the audacity of hope is a dish available at non-Democratic tables.

I am especially eager to see how the Obama camp plays the issue of experience. On Friday the 29th, the day of the Palin selection, Obama acolytes knew for a fact that, "This destroys McCain's ability to question Obama's credentials."

That's a canard. If a 44-year-old Alaskan governor lacks experience to be vice president, what does that deficiency say about the credentials of the a 47-year-old sometime community organizer in Chicago and one-term U.S. senator to actually lead the nation and, by inference, much of the world? Nothing very hopeful, is what it says.

I'd extend that argument. To know that Sarah Palin is a corruption-fighting reform governor who put the kibosh on the infamous "Bridge to Nowhere," who gave birth to a baby with Down Syndrome so that she might properly cherish him, who favors free markets and limited government, who snowmobiles and eats moose -- to know things like these is to understand Sarah Palin in a way one still can't get with the politically elusive Barack Obama.

At running his mouth we know Obama to be exceptionally good. At laying out a coherent course for the future -- complete with details for financing it -- he's, um, less good.

From his Denver speech: "I will end this war in Iraq responsibly"; "I will restore our moral standing"; "I will tap our natural gas reserves, invest in clean coal technology, and find ways to safely harness nuclear power." He'll do all this how exactly? No doubt we'll find out in due course. Will we like what we find out, though? That's less clear.

The Democrats at Denver offer a pig in a poke. You've seen him, you know his story, you've met his family. But you won't know him, really, until out he scampers, demanding, (with the support of fellow porkers in the Democratic Congress), the acceptance of proposals whose costs and implications we've never debated or thought through. We'll cross our fingers while the Rev. Jeremiah Wright leads us all in prayer.

Another word about McCain: 72-year-olds -- he became such the day of the Palin pick -- are supposed to be stubbornly set in their ways, when they can pry their eyes open, that is. Seventy-two-year old John McCain suddenly looks more vital and vibrant than some politicians a generation younger than himself.

It may not be enough in the end. That must be recognized. If it's written in the stars that the Age of Obama is upon us, we must bury the family silver and await better days. Yet today -- now -- we have a race that looks like, dare I say it, fun, in a sense foreign to us since this sad, angry, splenetic campaign began nearly two years ago. Let's get on with it.