The Senator Who Won't Go Away 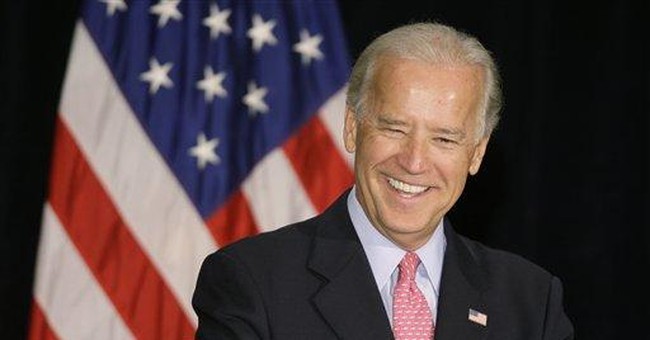 I might not have thought of this but for the anointing last weekend of Joe Biden as successor-designate to Dick Cheney -- status to be confirmed, or disallowed, at the polls in November.

Joe Biden? What's Joe Biden doing still hanging around? Such was the thought that came to mind before another one surfaced -- to wit, can't we ever get rid of any of these guys? Whatever happened to the presumably dormant cause of term limits for politicians better known for their ambitions than their excellences, if any?

Old political hacks -- the type Joe Biden typifies to a T -- just keep running for president, or, failing that, hang around Washington to annoy us by their unwillingness to leave the taxpayer-supported binge that never winds down, on which the lights never go out.

This season, Biden, for all that Democratic voters blunted his renewed presidential ambitions, threatens now to become vice president -- prized as he is by a new mentor, Barack Obama, for his experience and seasoning. What seasoning means, in Biden's case, is a serious case of political careerism that has kept him in the U.S. Senate since January 1973. He won't go away. He's having too much fun. Possibly enjoying his hair transplant too much.

The transplant is, for some of us, the Biden attribute that stands out like a country cowlick. He undertook it, if memory serves -- and frankly I don't care to run the historical records on such a feat -- in the early 1980s. A hair transplant! "Vanitas vanitatum." (I should note that I speak as one with even less to brag on, follicularly speaking, than the senator from Delaware when he began the transformative process.)

And not of that feature alone, perhaps. As news accounts this week have reminded us, Biden loves stories about himself: so much so that, on occasion, he has taken other people's stories -- as with the British Labor Party leader Neil Kinnock -- and put himself at the center of the narrative.

The Wall Street Journal reminds us of Biden's show-off badgering of Robert Bork and Clarence Thomas when the two appeared dutifully before the Senate Judiciary Committee for questioning about their credentials for Supreme Court service. Likewise we read of Biden's bald (so to speak) declaration to an argumentative voter: "I have a higher IQ than you."

Not necessarily. Genuine intelligence -- which instructs a man or woman in the transitory nature of human endeavor --- might produce in Joe Biden the recognition that undertaking to serve the public for 35 long years doesn't necessarily qualify as public service.

Hasn't Delaware anyone else who could sit where Biden sits, doing what he's doing? True enough, the good people of Delaware evidently like their representation. That doesn't mean non-Delawareans need fall for the job resume of the Senator Who Just Won't Quit.

There was a time in the early '90s when the movement to limit congressional terms seemed a sure winner. That was before the Republicans won Congress and learned the fun of running things -- the fun you never get over -- as witness, among others, Sens. Arlen Specter of Pennsylvania and the lately indicted Ted Stevens of Alaska.

Wouldn't a dozen and a half years on Capitol Hill, if we could effect such a change in the Constitution, be enough for anyone? Not for Joe Biden; yes, we understand that. Wouldn't it be enough for normal people -- patriotic, public-spirited, possibly even blessed without ego, or anyway one that sticks out like transplanted hair?