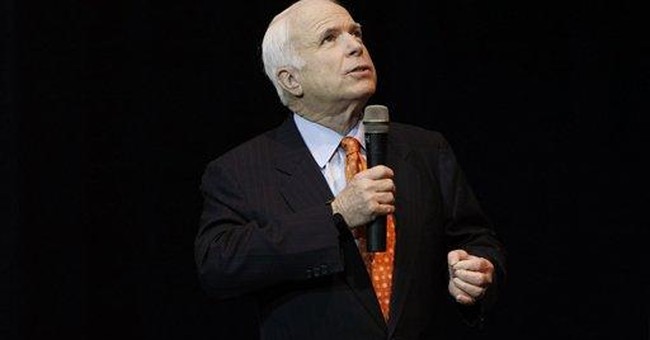 The joke's on the jokesters -- the late-night comics punching away at John McCain for the unforgivable offense of having attained his three score and 10. (For kids, that's a reference to a really, really old book called the Bible, and a "score," guys, is 20.)

And we know why. It's because "gender" jokes (think Hillary Clinton) and racial sallies (think Barack Obama) are strictly off limits. That leaves, you know, geezer gags. A president, or a presidential candidate, can't escape the comic stereotype. Isn't George W. Bush, according to the comedic wisdom, dumb as a post? (Forget the Yale and Harvard degrees.) A president, or a presidential candidate, exists to provide fodder for ridicule. We all know that by now, or we should.

Which is why, as I say, the joke is on those telling it. America is having a big-time senior moment right now. The American people as a whole are aging. Seventy-seven million baby boomers, born between 1946 and 1964, are headed for retirement or something resembling it. By the year 2030, that means one in five of us.

Meanwhile, Social Security and Medicare, according to trustees of the two systems, have promised $87.9 trillion more in future benefits than they expect to collect in revenues. By 2025, Medicare and Medicaid are expected to commandeer 50 percent of the federal budget. Tax increases or benefit cuts loom, as does unfocused but probably virulent voter indignation.

Shall we pause for a good belly laugh?

The deal here is that even as birth rates are stagnant, life expectancy is soaring. In 1929, a newborn American could expect to reach 59.2 before passing to his reward. A child born in 2001 has a life expectancy of 77.2 years. The leveling off of birth rates (Europe's are dangerously lower than our own) means fewer and fewer workers pay into Social Security and Medicare the payroll taxes that sustain the two programs.

By 2030, says the Concord Coalition, an alliance of political and business figures, "the increase in the aged population will triple that of the working population, and there will be only 2.6 workers for every aged person."

I mean, if that's a not a knee-slapper, what is?

The vibrant youngsters who throng Obama rallies, and sometimes faint dead away when he does his thing, may assume the geezers don't care what's happening or can't stay awake long enough to find out what it is. They really shouldn't bet on it. Nor should the nation as a whole. The geezer problem -- the greeter-mall-walker-prostate problem -- ranks up there with the country's leading challenges, not least for pre-geezers such as, oh, I don't know Sonny Boy Letterman, maybe?

Gosh -- another 10 years and Sonny Boy might be cracking jokes about 50-year-old presidential candidates and how little they understand what's really going on in America.

Significant reform is going to first involve significant leadership, then controversial proposals to allow and help Americans to put money aside for their own needs in private, tax-exempt or tax-deferred accounts. There's simply no plausible alternative to the disaster of running through, and then some, such money as government designates to pay promised benefits.

It's not particularly that Geezer McCain -- or however Sonny Boy and colleagues want to ridicule a man of 70 summers -- would bring to the presidency unique resources for the solution of the monstrous problem that lies just down the road. It's that America's senior moment is nothing to invite uproarious ridicule and lame jokes -- for that matter, not even good jokes -- about prostate-afflicted mall-walkers.

Yes, the comedians teach us a lot, every single night: not least about our present sensitivities, compared with those we had 30 years ago. No women-driver jokes, that's for sure! A little more consciousness-raising would seem to be in order -- sooner rather than later, some of us geezers might venture.