The Government and the Marketplace 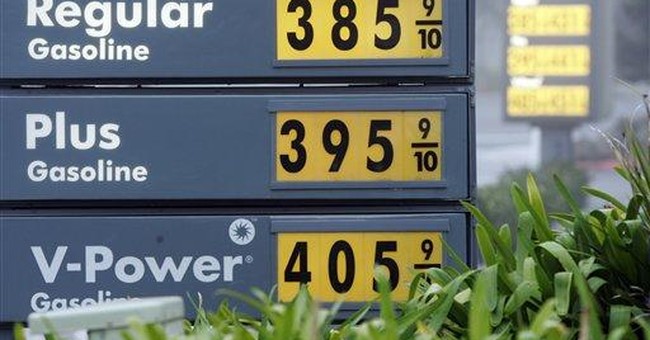 We may not know precisely, we Americans, what we want the next president to do about energy prices. What we shouldn't want him -- or her -- to do is as plain as a gasoline pump primed to deliver at 3-bucks-plus per gallon.

Some might consider getting down on hands and knees for this one: Please, oh, please, don't try regulating us into the kind of "solution" that solves nothing. A more effective, as well as becoming, alternative, especially if begging and asking nicely don't work, would be a people's march on the White House in opposition to making things worse by seeming to make them better.

Regulation of gasoline prices doesn't work, and, by and large, our politicians know it doesn't work. There's no escaping those remorseless facts.

Why worry at this point about regulation of energy? The numbers on the gasoline pump tell us. Anything over $3 a gallon is bad news, unless we adjust our expectations or start riding bicycles. Then, memories of past government interventions -- the price controls of the '70s and the lines that ensued at the gasoline pump, the "windfall profits" tax on oil profits -- make chillier the sensations moving up and down the spine.

Regulation isn't equivalent to "solution" of anything. It's merely what politicians -- those of a certain mettle, anyway -- always propose when significantly large numbers of voters are pinched and distraught. Like now.

An eternal idea is, kick the companies. Democrats are generally more fluent at this pastime than are Republicans. Since gasoline and heating oil prices commenced their latest run up the mountainside, with oil prices this week trading at record highs in real as well as nominal terms, the "stop it" pressure could become formidable.

Less than a year ago, during an earlier gasoline price surge, Hillary Clinton allowed as how she wanted to "take" the energy industry's profits and "put them into a strategic energy fund that will begin to fund alternative smart energy -- alternative technologies that will begin to move us toward the direction of independence."

We'll want to notice certain things in this claim -- which, by the way, has the power to attract politicians aplenty, even if and when Clinton vacates the presidential field.

One thing to notice is the idea of depriving an industry of its profits on the grounds that such profits are unfair. This has to be considered a major strategy for persuading companies of any kind not to do what's profitable but, rather, what wins government favor.

A second thing to notice is the liberal love of government "funds," which, because of being in government hands, are assumed automatically to work with precision and success. Even when invested in unspecified "smart energy" and "alternative technologies" that no one in government can be sure will do the job.

A wonderful example of government alertness to "smart" technologies is the congressional mandate to increase production of ethanol, a technique condemned editorially this week by The New York Times as a cause of soaring corn and wheat prices as well as environmental disruption.

Only a few days back, the country's main wind-producing state, Texas, barely missed out on rolling blackouts when more than 80 percent of its wind turbines went offline. It wasn't the fault of any government. Private companies own the turbines. The point is merely the insufficiency of putting vague trust in a relatively untried technology.

One difference between politicians and businessmen is what they want. Politicians want votes. Businessmen want profits. There's not the least reproach in wanting either one. The relevant question is: Which of these two aims has more to do with the satisfaction of customer needs? And the answer is of course! Business.

A businessman is no smarter, perhaps, than a politician. He's just more cued in to matters economic. Once the politician has your vote, you recede from view, at least until the next election. The businessman, by contrast, wants your business every day. What's wrong with that, only a presidential candidate, perhaps, could figure out.