Betsy McCaughey
|
Posted: Jan 20, 2021 12:01 AM
Share   Tweet
The opinions expressed by columnists are their own and do not necessarily represent the views of Townhall.com. 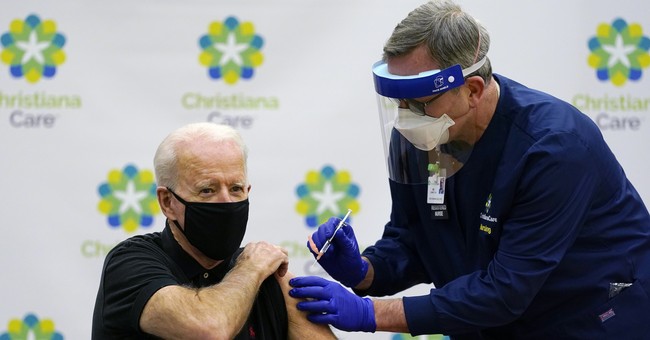 As COVID-19 mutates, it's becoming more contagious than the virus that invaded the U.S. about a year ago. A trip to the grocery with a mask on, which used to be low risk, is becoming riskier.

As cases and deaths increase rapidly, people are scared and upset. They're spending hours on websites and hotlines struggling unsuccessfully to get vaccine appointments.

We're in a war with a deadly disease. Biden's plan is like fighting back with a peashooter.

Almost as many Americans have died from COVID-19 in the last year as were killed in all the years of World War II. It's time to mount a D-Day scale response.

The U.S. needs to vaccinate 1.8 million people a day to achieve herd immunity by July. That's far more than Biden's goal of 1 million shots a day. Dodger Stadium can host 12,000 vaccinations a day. So 150 stadium-size sites are needed, vaccinating round the clock.

To accommodate the elderly, many venues should be first come, first served. Asking 70- and 80-year-olds to navigate complicated websites to make appointments is preposterously impractical.

To fight COVID-19, Biden also needs to defy the open borders flank of his party and make it clear that caravans of Central American migrants will not be allowed into the U.S. Last week, a Biden transition official said it, but Biden himself needs to say it forcefully enough to be heard below the Rio Grande. A caravan is pushing northward right now, posing a public health threat.

Air travelers to the U.S. have to show a negative COVID-19 test before boarding, quarantine on arrival and then get retested. Why should migrants be an exception?

Biden made fighting COVID-19 the centerpiece of his campaign, yet even as he takes office, he's short on details. The virus isn't waiting.

"Ominous" is how Dr. Anthony Fauci describes the emerging strains. A newly identified variant in Brazil can reinfect people who have already had COVID. The U.K. is so fearful that it blocked all flights from South America last week.

Meanwhile, a British strain that spreads fast because it causes more virus in the nose has invaded the U.S. Eighteen cases have been detected in New York. It's 50 to 70 percent more contagious than the original virus, and it will become the dominant strain by March, predicts the CDC. A highly infectious, homegrown U.S. strain is also causing cases to surge, reports Southern Illinois University researchers. The enemy is growing fiercer.

The good news is the U.S. has adequate vaccines in the pipeline. The federal government purchased 400 million doses of the Pfizer and Moderna vaccines, enough to vaccinate 200 million people. Both vaccines require two shots. Johnson & Johnson will seek FDA authorization for its vaccine by March. And a vaccine by AstraZeneca isn't far behind. Fauci has indicated there will be enough.

The problem is political bungling. CDC figures show about 60 percent of doses already sent to the states are still unused, including in New York. Yet Gov. Andrew Cuomo claims he's "moved heaven and earth" and is "getting shots in arms as quickly and efficiently as possible." Who is he kidding?

New York is opening a handful of mass vaccination sites now, after weeks of inaction, but seniors are still frantically trying to score appointments.

Meanwhile, Cuomo wants a "New York Arts Revival" this spring with 100 performances in venues such as the Park Avenue Armory. Sorry, Governor, but saving lives comes first. Turn the Armory into a vaccine megasite. Then when New Yorkers are safe, they can resume celebrating the arts.

Cuomo's lopsided priorities are an example of why the buck now stops with Biden. The new president needs to see the urgency, think big and act quickly.