Betsy McCaughey
|
Posted: May 31, 2017 12:01 AM
Share   Tweet
The opinions expressed by columnists are their own and do not necessarily represent the views of Townhall.com. 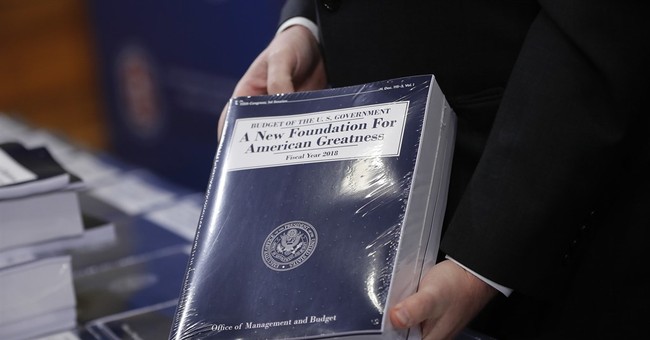 Hillary Clinton bashes President Trump's budget proposal for its "unimaginable level of cruelty." Almost every Democratic politician, and most mainstream media, are saying the same. Don't believe it. The budget, released last week, dignifies work. It reforms federal anti-poverty programs that have kept people dependent on government, with taxpayers footing the bills. Like the food stamp program, which has nearly tripled in enrollment and quadrupled in cost since 2000. Call Trump's budget the "Work Is Beautiful" plan.

Trump needs to go to the voters who elected him and defend his budget. While many in Congress are dismissing it as "dead on arrival," they're foolish to ignore the public's disgust with Washington's spendaholic ways. The president's budget is exactly what he ran and won on: less government, more jobs, school choice, strong defense, health care for vets and compassion for the working stiff whose taxes are wasted in Washington.

The howls of protest are mostly about cuts to anti-poverty programs. But taxpayers should be cheering. According to the General Accountability Office, these programs -- nearly 100 welfare programs and three dozen food and housing aid programs -- never even get evaluated. The programs targeted for cuts lack any record of success in reducing poverty.

The food stamp program, Supplemental Nutrition Assistance Program, now enrolls a staggering 43 million people. Would most of them go hungry without it? Not even close. Less than 1 percent of the nation is at risk of being hungry on a given day, but 14 percent are on food stamps, according to Harvard University food supply expert Robert Paarlberg.

Trump's SNAP reforms include requiring mentally and physically able recipients to work or look for a job. It's a revival of President Bill Clinton's 1994 welfare reform, which got whittled away over time. Trump's budget also requires states to pay part of the SNAP tab, to stop them from gaming the system. Many governors strive to increase food stamp enrollment in their state, regardless of need, just to rake in more federal dollars.

"We need folks to work," said Trump's budget chief Mick Mulvaney, "There's a dignity to work, and there's a necessity to work," he added, in order to restore the nation's economic productivity.

Trump's budget also pares funding for Social Security Disability Insurance to push those capable of working back into the labor force. Nearly nine million people claim they're too disabled to work, up from fewer than two million in 1970. It's malarkey. The nation can't afford so many working-age adults sidelined.

Federal employees are also up in arms against Trump's budget. Currently, they get retirement benefits 47 percent more generous than what private sector workers get. Trump's budget asks government employees to contribute more to their own retirement. That's fair. Why should federal employees be on easy street, while taxpayers are working overtime to pay the costs?

"We looked at this budget through the eyes of the people who are actually paying the bills," said Mulvaney. Too bad more members of Congress, including Republicans, don't do the same. They tend to kowtow to the noisiest politically correct advocacy groups rather than looking out for the hard-working silent majority.

Strangely, Trump's budget is also getting blasted as "ludicrously optimistic" for predicting 3 percent economic growth by 2020. But Trump's tax cuts -- if enacted -- are likely to spur investment in the equipment needed to raise worker productivity, just as welfare reform will put more people into the labor force. Remember that 3.25 percent growth was the norm for almost the entire last century. Trump's critics want us to think the anemic growth of the Obama years (a mere 1.6 percent in 2016) is the new normal, along with tens of millions on food stamps and disability. It's not the norm and America shouldn't settle for it.