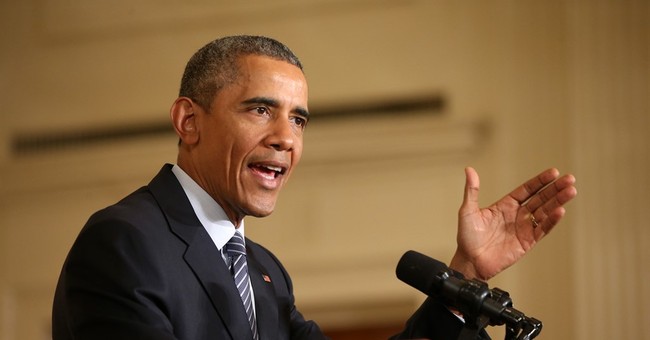 This week, President Obama is hailing his Clean Power Plan as "the single most important step America has ever taken in the fight against global climate change." Obama is posing as the environment's savior, just as he did in 2008, when he promised his presidency would mark "the moment when ... the rise of the oceans began to slow and our planet began to heal." Seven years later, that messianic legacy is in doubt. Obama's Clean Power Plan has never had legislative support, even when his own party controlled both houses of Congress. Now he's trying to impose it without Congress, an audacious ploy his old Harvard law professor Laurence Tribe condemns as "burning the Constitution."

As his presidency wanes, Obama is desperately burnishing his eco-credentials with environmental zealots like Pope Francis and the leftists at the U.N. and in the European Union. But here at home, his plan would be a disaster economically, which explains its failure in Congress. Hillary Clinton is pledging to support the plan, while Republicans vying for their party's presidential nomination are vowing to oppose it. The Clean Power Plan will be a fiercely debated issue in coal-consuming swing states like Ohio, Illinois and Pennsylvania -- where the race for the White House is usually decided.

Obama's Environmental Protection Agency is imposing the Clean Power Plan on all 50 states, requiring each state to close down coal-burning electric plants, and shift to other sources of electricity -- natural gas burning plants, nuclear plants, solar and wind-power generators -- in order to reduce carbon emissions by one third. Nationwide, about 40 percent of electric power is produced by coal plants. Forcing these utilities to close will burn consumers with higher electric bills. It will also send hundreds of thousands of jobs a year up in smoke, as employers pay more to operate their businesses, according to Heritage Foundation economists.

And for what? The purported benefit is to avoid an imperceptible 0.02 degree Celsius increase in global temperatures by the year 2100. That's the official EPA estimate of the benefits of this Clean Air Plan. You must be kidding.

That's what as many as 25 governors are saying, and they are expected to file a lawsuit challenging the plan. They've got a strong case. Although the EPA bases its authority on the Clean Air Act of 1970, nothing in that law authorizes the agency to do more than require plants to use the best available technology -- like scrubbers -- to reduce emissions. Congress never authorized the EPA to force states to close coal plants and move on to nuclear, or wind and solar. "The brute fact is that the Obama administration failed to get climate legislation through Congress. Yet the EPA is acting as though it has the legislative authority anyway to re-engineer the nation's electric generating system," says Tribe. "It does not."

Defenders of the president's environmental agenda say he has to act alone because the Congress is gridlocked. That's untrue. Lawmakers on both sides of the aisle are against the plan, and for good reasons.

Obama's EPA has tried several end runs around Congress, creatively interpreting the 45-year-old Clean Air Act to suit its agenda. But it hasn't always gotten away with it. In a stinging U.S. Supreme Court rebuke against the administration's restrictions on mercury emissions, Justice Antonin Scalia wrote that "it is not rational, never mind 'appropriate' to impose billions of dollars in economic costs" when the benefits are so uncertain.

The same could be said for the plan announced on Monday. Defenders of the new regulation predict falling energy costs from renewable sources, but so far that is pie in the sky speculation. Like the president's prediction that the average family would save $2,500 because of Obamacare.

But long before the Supreme Court weighs in on this new plan, presidential politics is likely to determine its fate. Another example of how high the stakes are in 2016.